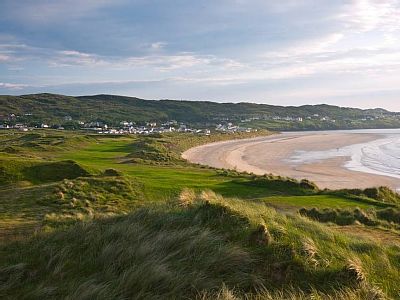 Plans have been put in place to tackle coastal erosion at a number of communities throughout West Donegal, including Maghery, Magheraroarty, Carrickfinn and Portnoo.

The plans have been welcomed by Deputy Pearse Doherty.

The Environment Section of Donegal County Council has started work on the plans.

It comes on the back of Minister of State for Flood Relief, Kevin ‘Boxer’ Moran visit to the county last month, in which a commitment has been given that the various authorities will continue to work collectively to ensure that coastal issues affecting County Donegal are further progressed.

Amongst the measures outlined, it has been confirmed that Donegal County Council will reapply to the Office of Public Works for interim works to protect Maghery strand and Magheraroarty beach, while Coastal Erosion Risk Management Studies are to be progressed at both Carrickfinn and Portnoo.

Welcoming the development, Deputy Doherty said “As everyone is well aware, I was glad that the Minister of State accepted my invitation to make an official visit to the county in order to meet with various communities and groups in Donegal to explore measures aimed at relieving flooding and the problem of coastal erosion which continue to negatively impact on communities here.

“Last Month, the Minister of State visited a number of flood and coastal erosion damaged sites and these engagements were very productive as it gave these communities the opportunity to discuss their concerns with him and officials, including those from Donegal County Council and the OPW.

“Since then, I have been in regular contact with the Local Authority over recent weeks and I have also spoken personally with the Minister of State to further highlight the importance of progressing these matters which were outlined to him during his visit.

“Following on from this visit, I’ve today received a further update from the Enviroment Section of the local authority in which it’s been confirmed to me that a shared commitment between the OPW and the Local Authority will be adopted into how coastal issues affecting County Donegal are to be progressed going forward.

“I understand that Donegal County Council is to reapply for interim soft engineering measures to offer protection to the beach and neighbouring community at Maghery, while interim measures to mitigate against ongoing damage and erosion of the Magheroarty beach and spit are also being sought.

“At Carrickfinn, it’s stated that the local authority has agreed to proceed with commissioning of consultants to progress a Coastal Erosion Risk Management Study, with €76,500 funding coming from the OPW. I understand that discussion around the implementation of the report’s recommendations will take place in due course.

“Furthermore, it’s been confirmed that the council has been allocated OPW funding for a Gweebarra Bay Coastal Flood and Erosion Risk Management Study, and it’s been proposed that this work be progressed in a single package with the study for the Carrickfinn Penninsula.

“While I very much welcome these developments and the commitment given by the council to progress these interim measures aimed at addressing erosion and flooding at these sites, I pledge to continue to work closely with the various authorities, including both the OPW and Donegal County Council, as well as to continue to support and make representations on behalf of these communities to ensure that these important projects are delivered.”