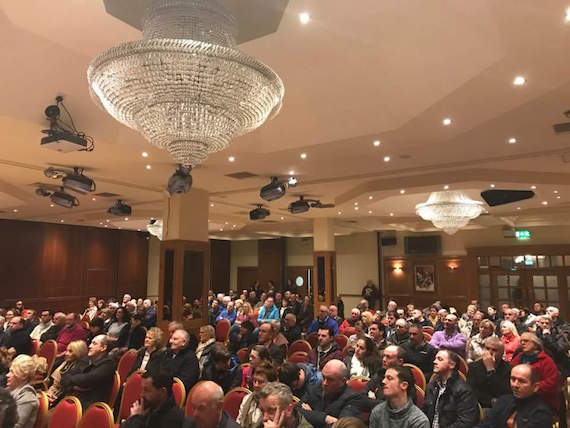 Hundreds of people have attended a meeting demanding that a decision to refuse planning permission for a cinema in Donegal Town be reversed.

The meeting, which had the support of more than 8,000 signatures, was held at a packed Abbey Hotel.

Those from the company behind the plans which were turned down because of a lack of road access, WJ Doland, were also there.

Organiser of the protest rally, Yvonne Callaghan, described the night as a huge success and said it sent out a message to those who turned down the application.

“The most important thing for us to get out is that everyone supports this project.

“And we want to send a very strong message that the refusal of this application was a wrong decision and we as the people of Donegal and further are not prepared to accept It.

“We need this decision to be reversed and call on the powers that be to do exactly that. Donegal needs this cinema for progression and it would benefit not only the residents of Donegal Town but also as far wide as Glencolmcille, Kilcar, Carrick, Killybegs, Ardara, Glenties and localities close to the town.

“As things are now some of us have to make 3 hr round journeys to see a film on a big screen. It would hugely benefit visitors and locals alike and make Donegal Town a more prominent tourist town,” said Ms Callaghan.

She added that for a long time Donegal Town has been too ready to accept the word ‘no’ and move on.

But she added “I think this time we are taking our stand and as this is something the community wants – if there are difficulties they can and should be worked out.”