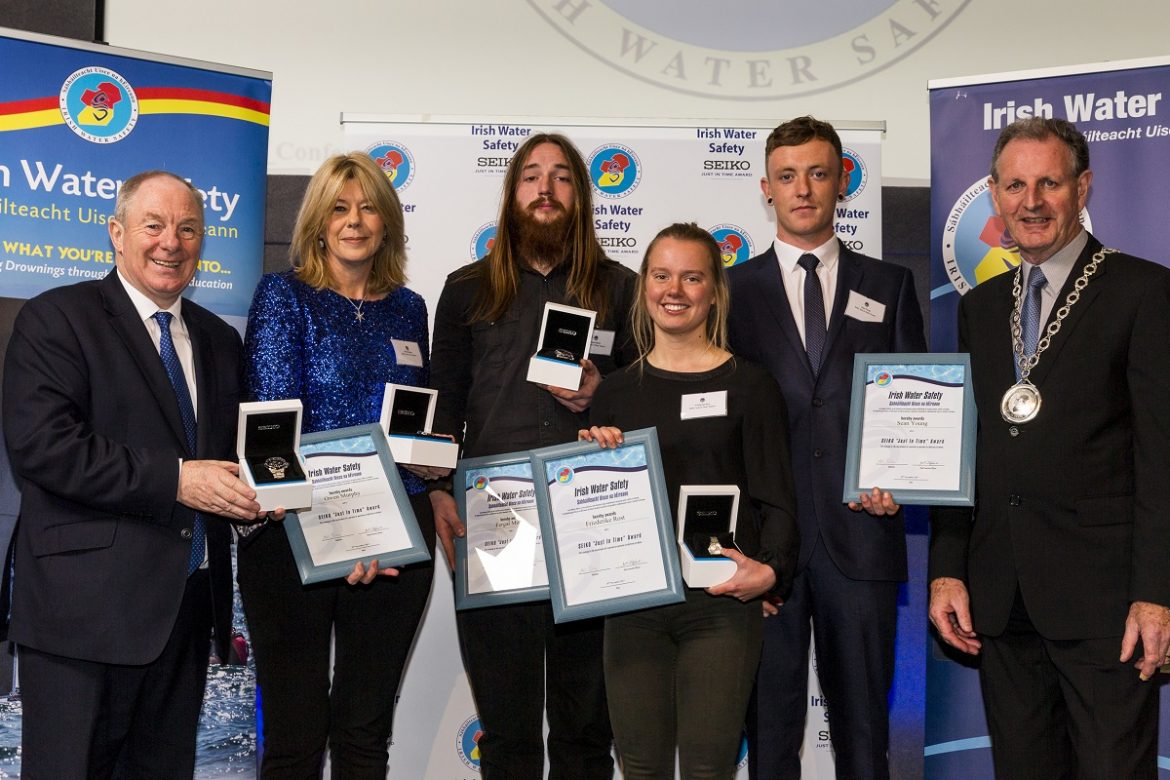 Owen Murphy, Fergal Muller, Friederike Rost and Sean Young were the heroes of the day on 15th of July 2017 when their quick-thinking acts saved many lives.

Nine young members of the Fermanagh GAA minor team have the brave surfers to thank after a dramatic incident saw them being rescued from the waters at Tullan Strand, Bundoran.

The “SEIKO Just In Time Awards” were yesterday presented to 30 people yesterday. The awards honoured those who came to the assistance of person(s) in difficulty in water and in danger of drowning – 30 lives were saved by the thirty rescuers at the ceremony. 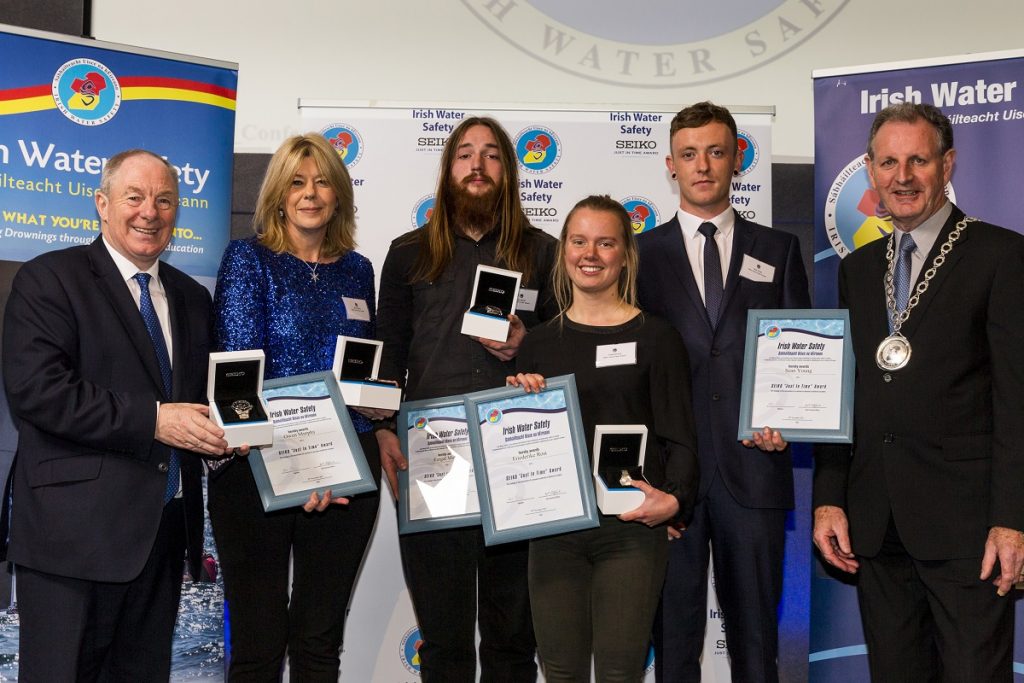 The Donegal incident occurred in July when nine teenagers entered the water to cool down unaware of dangerous rip currents.

Within minutes they all got into difficulty. The alarm was raised by members of the public who contacted the coast guard. In the meantime, four local surf instructors who happened to be giving lessons at Tullan Strand quickly intervened.

All four paddled to the group in difficulty, and prompted each of the teenagers to grab onto surfboards one by one.

They used their knowledge of the currents to assist them to paddle over to a safer area where they could walk ashore.

Each instructor returned a number of times until all nine of the teenagers were brought to safety.

Thanks to the quick thinking of Owen, Fergal, Friedericke and Sean, a major tragedy was averted.

Mr Michael Ring TD, Minister for Rural & Community Development presented the awards to the rescuers in appreciation for saving so many lives.

Minister Ring, whose Department has responsibility for water safety said ‘It is an honour to pay tribute to these courageous and deserving award recipients. Tragically an average of 133 people drown in Ireland every year and although that’s 133 too many, the figure would be even higher but for the dramatic efforts of these individuals who saved others from drowning and the ongoing work of volunteers teaching swimming and water rescue skills.”

“Complacency around aquatic environments is simply not an option”, remarked Mr Ring, adding that “thirty children aged fourteen and under drowned in ten years, reflecting the importance of constant uninterrupted child supervision.

“The work of Irish Water Safety’s volunteers in teaching and assessing Lifeguards pays dividends at our waterways every year, reflected in the fact that Lifeguards rescued 302 people from drowning nationwide this summer, administered first aid on 3,777 occasions and reunited 298 lost children found wandering unsupervised near water.”

“I appeal to all adults to make themselves more aware of the dangers in, on and around water”, continued Minister Ring.

“It only takes seconds for tragedy to strike and this can so easily be avoided if people learn about the hazards and take responsibility for their own safety. I ask that people encourage friends and family to read Irish Water Safety’s guidelines at www.iws.ie so that they have the knowledge, skills and attitudes necessary to avoid becoming a drowning statistic.

Drownings can happen quickly and silently so it is very important that people take training before pursuing aquatic activities.”