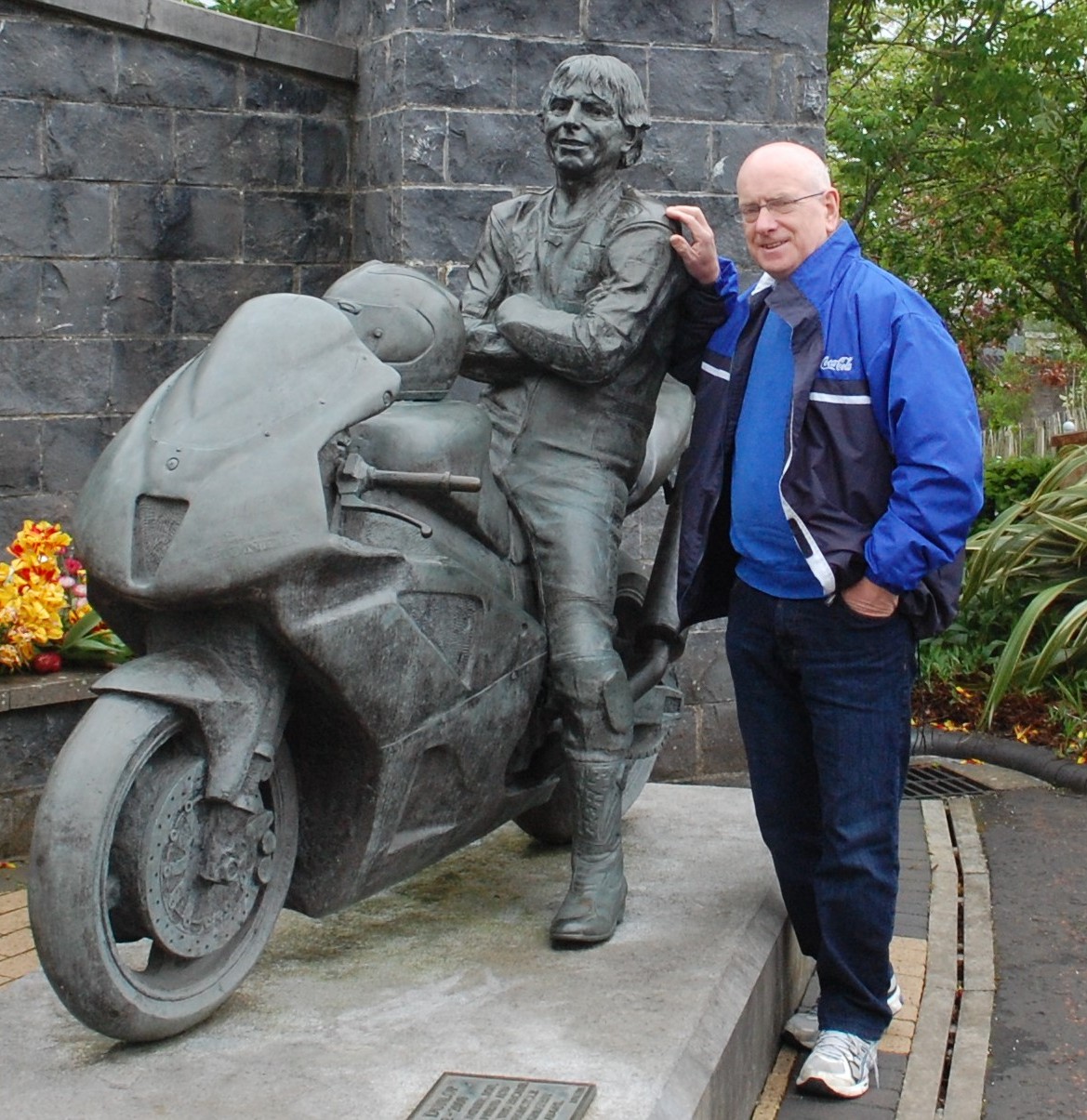 My Donegal… with Brendan Delap

Born and bred in Letterkenny, Brendan Delap is spending his retirement volunteering at the Letterkenny Parkrun which was started in Donegal by Margaret O’Donnell and aided by Anne McAteer.

Each Saturday, a different group of volunteers assist Margaret and Anne in ensuring the Parkrun ‘runs’ smoothly. The community cooperation has seen this free 5k go from strength to strength and has now established itself as a permanent feel-good fixture in people’s diaries.

Brendan is also involved in the Residents’ Association and Neighbourhood Watch in his area.

Pictured above with one of his heroes Joey Dunlop, Brendan is passionate about athletics, soccer, Gaelic football and many other sports.

This is Brendan’s Donegal…

(1) What is your favourite place in Donegal and why?
The top beach at Knockalla under the coast road. It is one of the most beautiful places in my opinion and some others might agree. It has been voted the third most beautiful beach in the world.

(2) If you could change one thing about Donegal what would it be?
I would run a dual carriageway from Manorcunningham to Lifford.

(3) Who is the one person that you look up to and why?
I look up to the late Jim Mc Cormick a lot because he was the driving force behind and was dedicated to Letterkenny eventually winning the National Tidy Towns Competition. My only regret is that he was not here to see his lifetime ambition achieved.

(4) What’s your happiest memory in Donegal?
Living in The Station House at the Letterkenny Lough Swilly Station (now the entry road to Tesco) where my father was the Station Master. My early childhood memories of trains on the Lough Swilly line and right next door trains plus railcars on the County Donegal Railway line are some of my happiest memories. While other children had toy trains I was fortunate enough to have the real deal.

(5) What has been Donegal’s proudest moment in recent years?
The Donegal Team winning a second All-Ireland was a very proud moment and from what I can gather was reasonably well celebrated by all!

(6) If you found a magic wand that allowed you to grant one wish, what would it be?
I would wish for a ‘beam me up Scottie’ moment that on completing a holiday abroad I could be beamed home in two minutes flat. Sometimes delays on the return home can take the gloss off a good holiday.

(7) What is your favourite Donegal-made product?
Like a lot of people in Donegal I am fond of a potato or two. The Smiths in Manorcunningham have for several generations perfected the art of producing potatoes that have a taste second to none.

(8) Who is Donegal’s greatest ambassador around the world and why?
Probably Sarah Jessica Parker who has fallen in love with Donegal and its people. She has nothing but good to say about Donegal and someone of her stature has great influence over people especially her fellow Americans.

(9) What has been the biggest compliment you’ve ever received?
Don’t get too many.

(10) Who is your favourite Donegal sportsperson of all time?
Marathon man Danny Mc Daid by 26.2 miles if you can pardon another pun. Some of today’s athletes are semi if not fully professional and Danny’s achievements while working as a full-time postman are phenomenal.

Training after a days work was difficult but Danny was competing with people who would have been professional even back then. A true Olympian in every sense.

(11) What is your favourite Donegal restaurant?
Lemon Tree and Yellow Pepper in Letterkenny are both excellent restaurants and I cannot choose between them.

(12) What is your favourite Donegal saying or expression?
Kevin Harley Trentagh has a great saying that always amuses me. “There is something not right wrong here”.

(14) What is your favourite food that you associate with Donegal?
Fresh fish from Greencastle is hard to beat.

(15) Is there anything that really annoys you about Donegal or its people?
Some can have beautiful properties neat and tidy but would ignore litter outside their front gate. I can never understand this.

(16) Do you have a favourite local band?
Raw. A great experience every time they play.

(17) If you had a million euro to improve something in Donegal what would it be?
Put it as a small deposit towards having two flyovers in Letterkenny to elevate the congestion caused by traffic that does not need to pass through the town.

(18) Where’s the most unusual place you’ve logged on to Donegal Daily?
Seoul in South Korea.

(19) Is there anything about Donegal that you are very proud of?
I am proud of its beauty and its people regarded by many as the friendliest in Ireland.

(20) What is the most rewarding thing about what you do?
I am involved in Letterkenny Parkrun and it is really rewarding to see the enjoyment people take out of this free to enter event run every Saturday at 9.30 am.

Would you like to take part in our My Donegal feature? Drop us a line at info@donegaldaily.com!