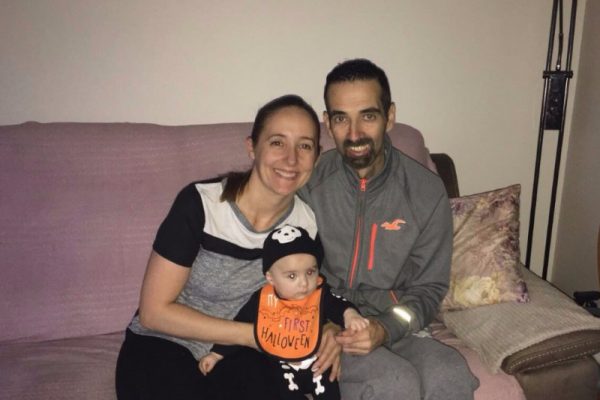 Let’s ensure a future for Michael

The family of a well-known Letterkenny man have made an impassioned plea for the community to help save his life.

Michael McGrath has been diagnosed with stage 4 bowel cancer and is pinning his hopes to a specific type of chemotherapy being pioneered in Austria.

His family have paid for his first few rounds of treatment but need more to pay for the Immunotherapy treatment which will cost around €150,000.

Now a ‘Go Fund Me’ page https://www.gofundme.com/a-future-for-michael has been launched to help assist the family to get the 40-year-old teacher the treatment which could save his life.

A huge GAA fan, Michael has been a St Eunan’s stalwart all his life in his native Letterkenny.

Indeed it was his love of GAA which helped him complete his life in 2013 when Donegal fan Michael met future wife Susan after a Dublin/Donegal game in the Croke Park Hotel.

Despite a radical difference in the colours of their jerseys, the couple married last year and welcomed their son Senán into the world in April of this year.

But just three months later in July their worlds came crashing down when Michael was diagnosed with stage 4 bowel cancer.

Michael, who has suffered from colitis for many years, was told that surgery was not an option and that he must have standard chemotherapy.

That has stabilised his illness for the meantime but the Listillion man has been told that he faces the worst if he doesn’t have specialist treatment.

A quiet-spoken and unassuming man, Michael says he does not want people to think he is asking for sympathy or a hand-out.

Instead, he is simply asking for people to help him spend as much more time as possible with Susan and little Senán.

“I want people to realise that I would never do this, to simply ask for money but I have no choice.

“I have found myself in this position for whatever reason and I simply want to be able to get this treatment to get better and spend as much time with Susan and Senán.

Initial tests on others using the treatment, which specifically targets certain body organs, have been excellent.

Michael’s family including dad Pat, mum Mary, as well as sisters Bernadette and Mary and brother Anthony, have been left shocked to their very cores at how quickly Michael’s illness has developed.

Michael’s sister Mary said they will do whatever is necessary to raise these funds for Michael.

“Michael has given so much to so many people. He has taught so many children and volunteered so much of his life to so many others.

“He currently teaches at Holy Rosary College in Crumlin, Dublin (he is on leave at present) but has also taught in St Eunan’s College, Youthreach in Lifford, Finn Valley College and Magh Ene Bundoran.

“We understand that not everyone is in a position to donate but you can also support Michael by sending well wishes and keeping him in your thoughts and prayers” she said.

If you would like help Michael to be able to spend some more time with his wife and young son, you can.

Simply log on to Go Fund Me  https://www.gofundme.com/a-future-for-michael and donate whatever you can, no
matter how large or small the donation.

Let’s help Michael to be there to help Senán to do all the things that dads should be there to do.