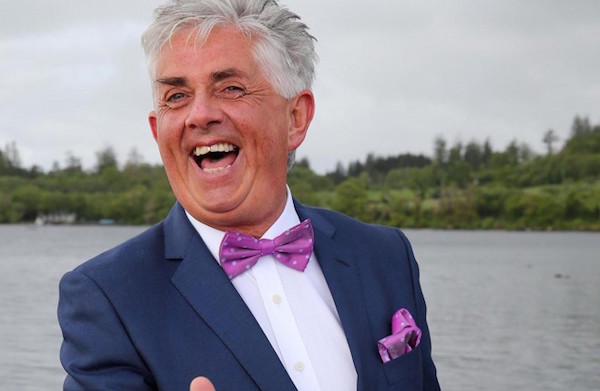 Noel Cunningham was honoured last night at the London Donegal Association’s Annual Gala, where he was named Person of the Year for 2017.

The lavish event took place last night at the Hilton Hotel in Wembley, and marked the 70th anniversary of the association’s establishment.

Hosted by Daniel O’Donnell, the crowd erupted when Noel Cunningham’s name was read out.

Noel lived in London for two decades and often returns to visit old friends. He says that he had the most wonderful time in London, but Donegal will always be home.

Noel is just back from Beirut, Lebanon, and Damascus to work with those who have been devastated by tragedy.

Speaking at the ceremony, he said that his life was turned upside down twenty years ago when his sister and her husband tragically died in a car accident.

“Let me tell you something, I would have never contemplated coming back to be in Donegal, but now I would never ever think of being anywhere else because no matter where I go in the world and no matter my day brings me or my week brings me, I come over the Pettigo road and I look towards Donegal and Donegal Bay and if it’s at night I see the lights on the road from Mountcharles and I get that immense feeling of pride and just to be part of Donegal and using every ounce of energy that I have to promote it in all its beauty, in all its hospitality, in all its thought and care for people.”

Daniel O’Donnell told Noel “I can tell you without any hesitation that this award is richly deserved”, and congratulated him on behalf of everyone in Donegal, home and away, for winning the prestigious award.

Noel hopes that the award will help him further his promotional work for Donegal and with his humanitarian work.

Donegal TV captured the wonderful evening, with all of the night’s highlights being available on their Facebook page.