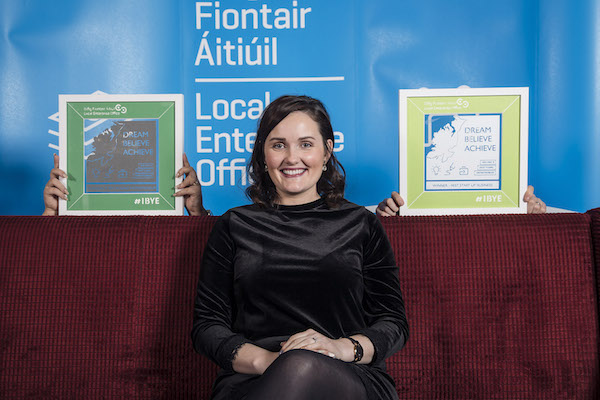 The overall winner of the Donegal final of Ireland’s Best Young Entrepreneur competition, Ciara McGlynn, says she hopes the success of her business will inspire other young people to return to Donegal and establish businesses in the county.

Ciara, who won the Best Start-Up Category as well as the overall prize at the Donegal finals, returned to the county with her husband Gareth and set up Niche Specialist Staffing partners in Letterkenny last year.

The international recruitment firm that recruits senior construction estimators (Quantity Surveyors) in the State of North Carolina was just one of the three major prize-winners on the day in Donegal.

“It’s not often that I am speechless, but I am overwhelmed today. It has been a whirlwind few weeks and a whirlwind of a year. I am just so proud and so determined now to go even further,” Ciara said.

The winner of the Established Business category in Donegal, Thomas McLaughlin from Tadáias Premium Cycling Apparel, was full of praise for the IBYE competition, having entered a number of years ago in the idea category.

“I came to the competition with an idea two years ago and while I didn’t win, the help I have received since then from the Local Enterprise Office has been hugely beneficial to helping me grow and really establish my business.”

Thomas also works with and advises students in the Fashion and Promotion Degree in LYIT and it was an exceptionally successful day for the college programme.

Winner of the Best Idea Category was Deirdre Ward who has a background in education, having taught for eight years in Ireland and Abu Dhabi.

Deirdre explained that her idea had changed throughout the bootcamp as she looked at her initial idea in more depth.

“I felt there wasn’t enough of a niche market for my initial idea so I changed it from a well-being programme for children and now it is entitled ‘Unlocked’ and my idea if to help children unlock behaviours and emotions that are caught within and to help educators and parents to alleviate challenging behaviours and teach them the skills that can be implemented.”

Other awards presented on the day saw Clare McLaughlin from Burnfoot business ‘All Ears’ as runner-up in the Best Start-Up business category for her range of furry farm animals, while Bundoran’s Finn Ní Fhaoláin took the runner-up award in the Best Established business for her Finn’s World cookbook and products.

Earlier in the day, guest speaker at the awards ceremony, economist and broadcaster David McWilliams told the finalists “they are the future.”

Addressing a crowd of over 100 assembled guests, he urged businesses to continue to think creatively.

“In these disruptive times we need people who will think a little bit unconventionally and we have to change the way we think in Ireland so we can see the enormous potential in every person and in every company.”

He also urged those young businesses to stick to their dreams and not to be afraid to make mistakes.
“You only learn by making mistakes and being wrong sometimes. You cannot be afraid of being wrong or you will never learn to change your mind.”

David McWilliams also told the businesses that they need to continue to have the self-belief that they can compete on a global scale.

“You do not need to be on the periphery of anywhere,” he said.

Head of Enterprise in Donegal, Michael Tunney, urged businesses in the county to challenge the Local Enterprise Office to help them grow and be even stronger.

“We want more challenges, we don’t want to settle for less,” he concluded.

Before the awards were presented there was a video message from one of last year’s Donegal winners Gillian Doyle who progressed to the National finals.

Gillian had a perfect excuse for not attending the ceremony as she was getting married that day, but in her message to the finalists she told them all to be very proud of achievements, but also to make sure they maintain their contact with each other and with the Local Enterprise Office and that network of support will help them all grow their business.