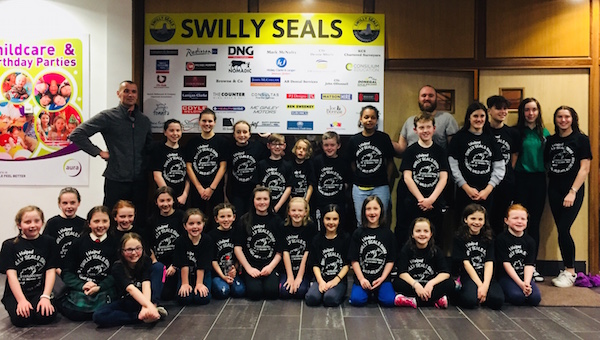 The Letterkenny swimming club took on the Donegal Wild Atlantic Way (555kms) on 3 December last completing the distance in a little over 10 hours.

The swim took place in the Aura Leisure Centre in Letterkenny.

Taking part in the event were current club members, aged between 7 and 17 years of age, ex-club members, 24/7 Triathlon Club members and members of the general public.

It was quite fitting that when the urgent call went out on Facebook for more swimmers that Paddy Bond Snr (Club coach in the 1990’s) and Emmett Toner answered the call.

Emmett’s late father Mickey Toner was one of the clubs founding members back in 1985.

At 5.30pm it was announced that the distance had been reached, all swimmers got out of the water leaving the final 25 metres of the day to be completed by the current Swilly Seals members.

A huge word of thanks to Aura for use of the pool for the full day, all swimmers, parents, volunteers, lap counters, Pat Brady for the food and especially all of the sponsors who supported the event in helping the club raise necessary funds.