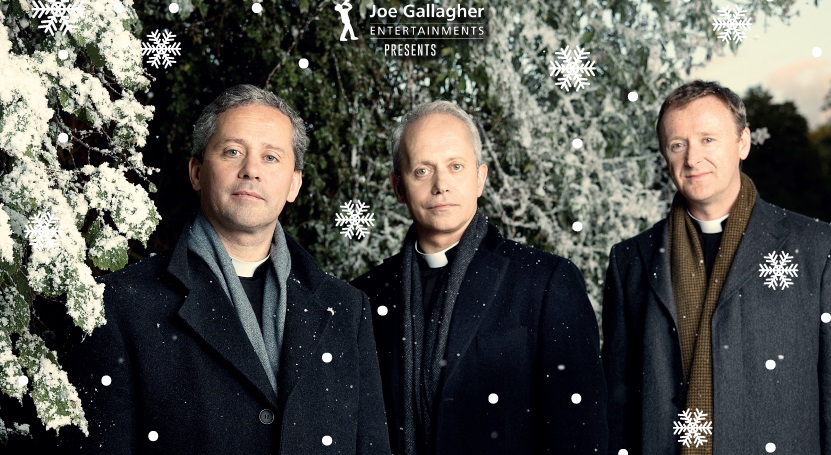 A truly special show will take place in a Letterkenny church this Christmas, as classical music trio The Priests will perform live in the Church of the Irish Martyrs on Friday, December 29th.

The Northern Irish Roman Catholic priests will be delivering an excellent Christmas concert of carols, hymns and popular festive numbers.

“We have to sing the Christmas carols that everybody knows and loves,” says Father Delargy. “You have to bring out all the old faithful carols. But we’ve tweaked the repertoire to bring in some new things.

“Eugene and Martin are tenors and then I have a slightly deeper voice, a baritone. I love the Little Drummer Boy, which is a song we recorded with Shane McGowan two years ago; it suits my range very well.”

When The Priests released their eponymously-titled album back in 2008, they could have had little inkling of what was about to happen to them. The racking up of an awful lot of air miles, three albums released, three million records sold, three Classic Brit nominations, one Guinness World Record, a book, countless TV appearances and playing innumerable concerts around the world to audiences that have included the Irish President, the British Royal Family and the Pope. It’s fair to say they have made their mark.

Christmas With The Priests will feature much-loved classics such as Ave Maria, Pie Jesu and Amazing Grace, Ding Dong Merrily On High, O Come All Ye Faithful, Sussex Carol, Silent Night and a host of other hallowed songs.

The priests work in their respective parishes when not touring and recording, and the profits made from their music career go to charity.

“We don’t meet and rehearse too often because we know a lot of this material pretty well,” confirms Father David; and they would, having sung their way through a substantial number of Christmases.

“We are very respectful of each other’s different areas of expertise,” he adds, when asked if they experience creative differences. “We are three fairly strong personalities as well, we all have something to say and we certainly don’t always agree. Sometimes we just have to agree to differ,” laughs Fr Derlargy, “that’s the Christian way.”

The Priests certainly know how to make the most joyful of holy rackets.

The Priests’ to perform a special Christmas concert at Church of the Irish Martyrs was last modified: December 5th, 2017 by Staff Writer