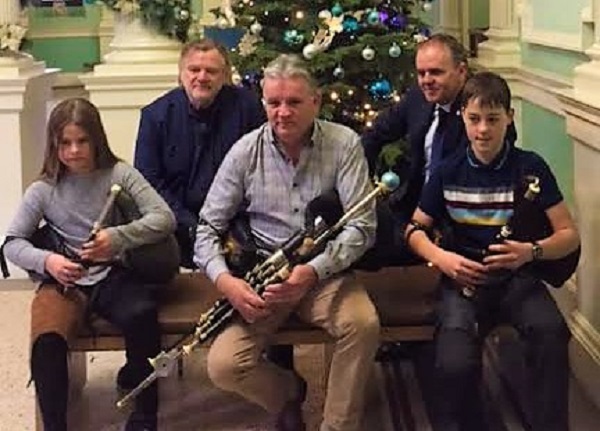 Up and coming Donegal musicians Niamh Landale and Irial Ó Casaide were on hand at the National Library for the announcement by Donegal TD and Culture Minister of State McHugh.

Actor Brendan is a huge fan of Uilleann Piping and wanted to be at the announcement today where he was entertained by the Donegal duo.

Minister McHugh welcomed confirmation that Uilleann Piping has been inscribed on the UNESCO Representative List of the Intangible Cultural Heritage of Humanity.

“The Uilleann pipes are beautiful indigenous instruments and I was delighted that Niamh and Irial were at this event today giving our tradition – and their tradition – the worldwide recognition it deserves,” said the Donegal TD.

“It was great to chat to Brendan too about his love of Irish culture and music. He has a particular interest in the pipes and wanted to be here to mark the occasion.

“I want to pay tribute to all those over the past half-century who reversed the decline in the making and playing of the pipes including those in Donegal who were part of that.”

Earlier today in Jeju, South Korea at the UNESCO twelfth session of the Intergovernmental Committee for the Safeguarding of the Intangible Cultural Heritage, Ireland’s first application – Uilleann Piping – was approved for inscription on the Representative List.

This is the culmination of over 18 months work which commenced in March, 2016, and which was led by the Department of Culture, Heritage and the Gaeltacht, in partnership with Na Píobairí Uilleann.

The advancement of Uilleann Piping has also been supported by Arts Council/An Comhairle Ealaíon on an annual basis since 1984.