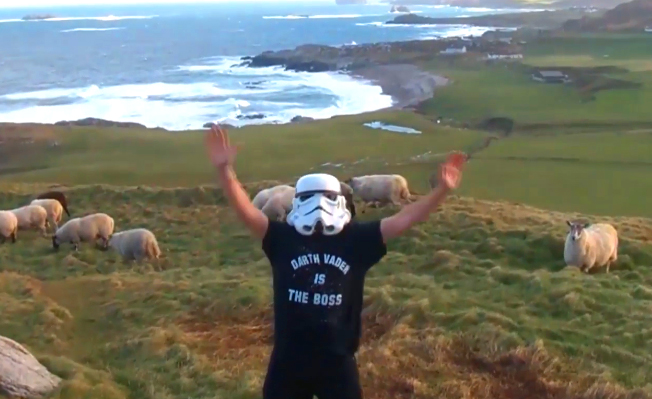 WATCH: The funny force is strong with this ‘Star Wars in Donegal’ song

Whether you’re a Star Wars fan or not, you’re bound to enjoy this new song and video release.

Today sees the launch of ‘Star Wars in Donegal’ a hilarious take on the events of 2016 when scenes from the upcoming Episode VIII were shot at Malin Head.

The song was written by Derry singer and musician Martin Sweeney and a video was released alongside the tongue-in-cheek track.

It’s clear the filmmakers didn’t have a blockbuster budget and might have had a few sups during production, but the result is perfect for the satirical song and guaranteed to make you laugh.

“It’s my mad vision of how Malin Head was invaded by the entire Star Wars cast and crew.

“I had this picture in my head of a mad Star Wars drinking session during the making of the new Star Wars movie when they drank the bars dry.

“It’s all about having a bit of craic just before the release of the new Star Wars film on Friday 15th December,” Martin said.

‘Star Wars in Donegal’ is due to be released on YouTube, Facebook, Spotify and iTunes this Friday, 8th December.

The video was produced with a grand budget of £50 (plus a round of drink) at Farren’s Bar.

Taking in the best of the local landscape and drinking establishments, the film has ‘half-cut Jedi’, Princess Leia sipping Tia Maria and even an airborne Millenium Falcon.

Watch out for hilarious snippets like R2D2 ‘peeling spuds’ and quips about the Malin toilet debacle!