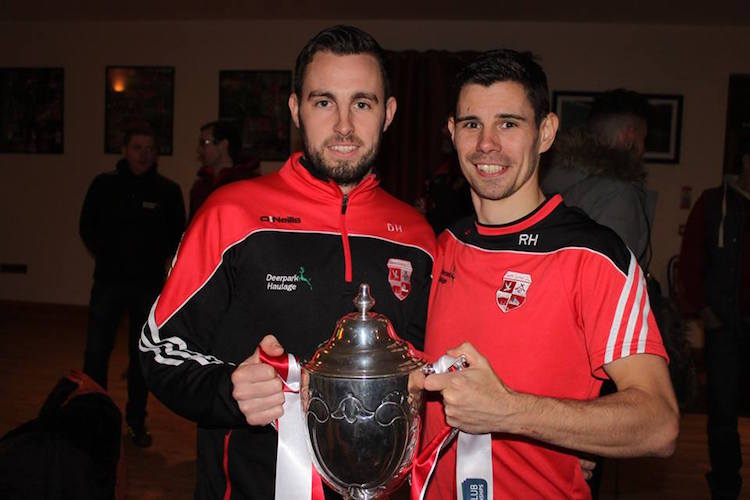 As Ricky Hegarty was togging out for training on Monday night, the Naomh Colmcille defender had to do a double take.

By Chris McNulty in Edinburgh

The frost was sneaking its way into the Castlefin air on a crisp December night when Naomh Colmcille were finalising their blueprint for this afternoon’s All-Ireland Junior quarter-final against Dunedin Connollys.

With the trip to Edinburgh, where they face the All-Britain champions today at 1.30, just days away, Hegarty pulled a wry smile as Robert Emmets players embarked on their winter training programme in the next room.

“If you’d said at the start of the year we’d be playing an All-Ireland Championship game in December, there’s no way we’d have believed it,” Hegarty said, with the look of a man still pinching himself.

Just 11 months after being appointed as manager, McKinley took his men to the Scottish capital on Thursday afternoon. Naomh Colmcille trained in Scotland yesterday ahead of today’s big showdown.

McKinley has been meticulous in his preparation and it hasn’t been hard for his men to follow the lead.

Hegarty said: “Ryan came to us late, but we got into it straight away. we started off with a seven-week programme in the gym and got out on the field. Those seven weeks really helped get the team together and got us all on the one page.

“I know from playing with Ryan the passion that he has for the club. He has carried that into management. It’s not hard to get behind a man who wears his heart on his sleeve. You know where you stand with Ryan. He wants the best for us.

A tenth Championship game of the year awaits this afternoon when a place in an All-Ireland semi-final is the carrot dangling before them.

These are giddy times and yet you don’t get the sense that they’re content with merely being All-Ireland quarter-finalists.

Hegarty says: “We’re going to compete and contest, definitely. It was the same in Ulster. The county wasn’t enough. There was a lot of hunger left over.

“The focus was very narrow. We were just focussed on every game and then the next training session. We never get ahead of ourselves so focus hasn’t been a problem. It’s just pure tunnel vision.”

Hegarty, who turned 30 last month, is one of the veterans now.

He can sense a restoration of pride within the locality. Folk have attended their first games in decades this year, more than happy to bridge those lengthy gaps to roar on a side that is the talk of the villages of Newtowncunningham, Killea, Carrigans and St Johnston once again – for the right reasons.

“This is building for the future and making sure all the wee boys in the area want to play for the club,” Hegarty says.

“A lot more people are watching us and talking to us about the games now – people who’d never be watching games or talking football. It’s great to have the community all behind us.

“Everyone is performing well and everyone wants to perform for each other. We have plenty on the bench now.

“That might have hurt us in the league when we didn’t maybe have the same depth to the squad.”

There remained an aching sense of ‘what if’ from their derailed promotion bid from Division 4, but the addition of the McCloskey Cup for the first time in seven years quelled the hurt.

A voyage to an Ulster title, while losing club founder and President James Dowds in an emotional time, hoisted them to unparalleled heights.

In a perverse sort of way, missing out on one of the promotions slots has perhaps given them the desired wake-up call.

Hegarty said: “We were disappointed with the League and missing out on promotion. We went into the Moville game and just said we’d throw the kitchen sink at it really. We got over that and we’ve grown in confidence since.

“Missing out on the League definitely gave us a kick because all the focus had been on it.”

When they were beaten 3-13 to 1-11 by St Mary’s of Convoy in early August, few would have fancied Naomh Colmcille’s chances of being still standing in December.

But now they stand an hour away from extending this season into next.