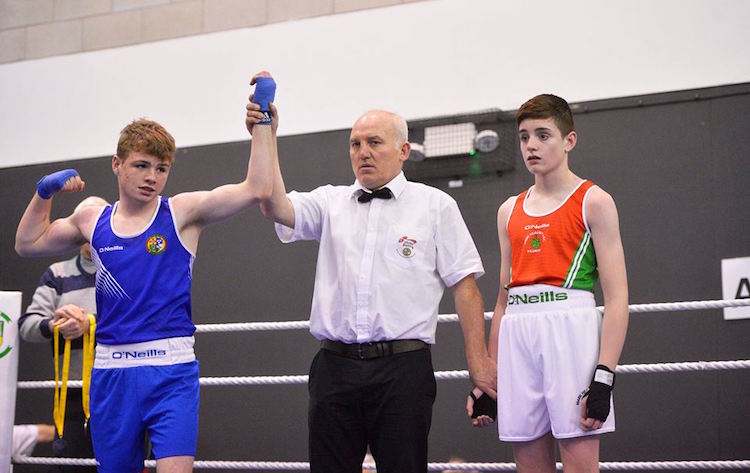 Ulster 9 County joy for trio of Donegal boxers in Belfast

At the Falls Leisure Centre, the Championships for boys and girls aged 14, 15, 16 and 17 were held before a capacity crowd.

Picture: Dunfanaghy’s Oisin Wallace has his hand raised in victory.

‘Little Miss Dynamite’ McDaid, already a two-time Irish champion, made no mistake with another impressive win as the Crana College student continues to rise the ladder.

Raphoe ABC man McGarrell, a former Irish champion, caught the eye in his Boy 6 52kgs final win over Reece Toner from the Saints BC.

McGarrell had beaten Adam Thompson of Spartans in his semi-final and appears back in the groove again after some testing bouts of late. McGarrell is now expected to return to the National Stadium to chase national honours.

There was no let up from Wallace as he finished the job inside the opening stanza.

Wallace also recorded a first round stoppage against Manus Graham (Virginia BC) on route to glory.

Carndonagh’s Andrew Cunningham was beaten by St Paul’s Tomas McCann in the Boy 5 57kgs final and another Carndonagh puncher, Oisin Devlin, lost out to Jake Tucker of Holy Family in the Boy 6 70kgs final.

There was a near miss, too, for Raphoe’s Tom Doherty as he missed out following a split decision loss against Omagh’s Michael Ward in the Boy 6 80+kgs final.

Raphoe colleague Liam McMonagle should have been taking his place in the finals, too, but sustained a hand injury in a semi-final win over Harry McLaughlin from Moneyglass and had to pull out of the boy 5 60kgs final.