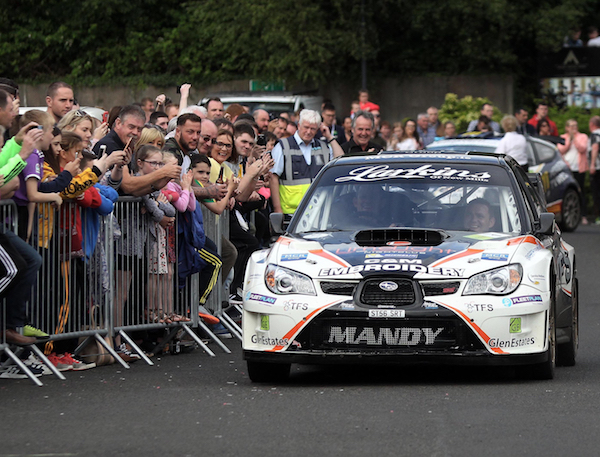 DD Motoring: Review of motorsports for 2017

This week we take a look back at some of the motorsport items that we covered in 2017.

If you don’t like Mk1 or a Mk2 Escorts look away now! All of our heroes have come through the Ford Escort school in one way or another!

Donegal International Rally: Soft days in Donegal
I am sure the late Mandy Kelly, Manus Kelly’s grandfather spent manys the day at the mart in Milford and knowing him and his quiet way his conversation would have ended up on the weather. We have “soft days” in Donegal and they refer to the weather, and are very unique to Ireland.

It’s a day when we have both a mist and a drizzle which we some times call a “mizzle”. When the rain does not fall to the ground in heavy droplets, but seems to hover and linger in the air. If you are a rally crew and you can manage to translate the term mizzle into a Michelin tyre at the service at Milford Mart you can deal with this. A soft day in Fanad needed a soft slick tyre!

If you ever need to question your local hero, Manus Kelly’s ability as a driver, just take a look at the Fanad stage second time around on Sunday evening. Manus was leading the rally for just one stage and then lost it on the next and with only three stages to go.

The perfect storm in Donegal was brewing and two Donegal men were battling for the win. As Manus Kelly passed Doaghbeg National School half way through the Fanad Head stage Manus was back in the lead and when he landed at the post office at the end of the stage he posted a time 18 seconds quicker than anyone else.

Manus had given it his all and it was Alister Fisher and Gordon Noble that posted the fastest time on the next stage as the wild Atlantic Drive took another Donegal prisoner in the form of Donagh Kelly, who flipped his Ford onto its roof and back on to its feet and out of the rally. Even the way the rally was run on the final day, Manus Kelly showed his talent by winning his back to back title even with the stages running back to front!

Escorts on the Brennagh Stage 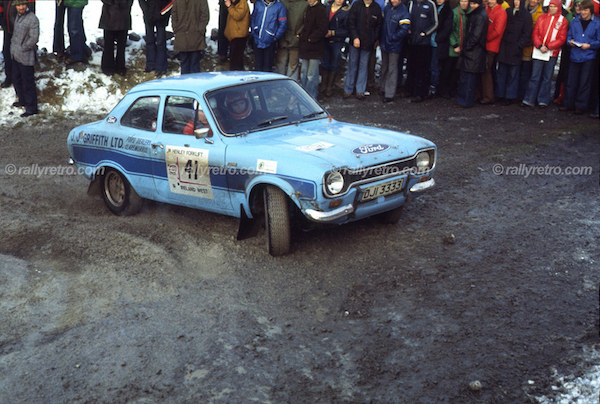 Power from Above .
John Lyons in that famous Ford on the Galway Rally in the snow complete with Fr. Manions Dunlop SP Sport Tyres. Many thanks to Rallyretro.com for finding this photo for me this week.

When Manus was a wane he watched in amazement his fellow Glenswilly man, Damien Gallagher, power his Escort up through the Breenagh Stage on the rally and in turn years before that Damien Gallagher did the exact same thing watching Billy Coleman, Ari Vatanen, John Lyons and the late James McDaid on the same stage.

The Breenagh stage has brought these two Glenswilly men to new heights in rallying. In 2017 Damien won the Donegal National Title in his Escort as Manus did in his Escort on his way winning the Donegal International Rally back to back in his Subaru. 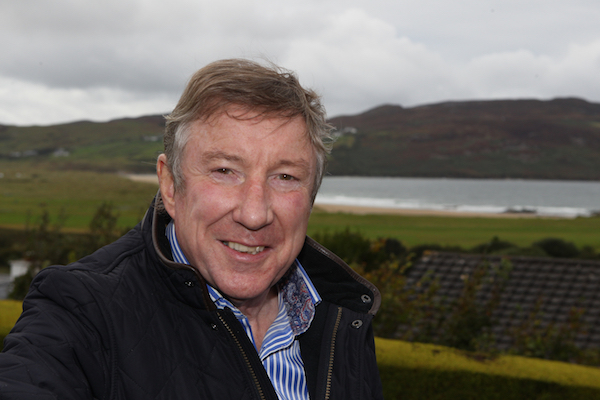 John Lyons pictured in Portnablagh this home away from Home as he looked forward to the Harvest Rally in October. Photo Brian McDaid

John Lyons made his first major impression on an International Rally not in Donegal but in Galway in 1978 and again it was a car that was well through the mill by the time he got it. The car was built originally by Ford for the Tour of Britain for Tony Pond. This car was a group 1 Ford RS2000.

We tracked down a photo of this blue RS2000 for our report thanks to Fergus from Retro Rally.com

When John Lyons headed to Galway in his Ex Works Ford with his neighbour and friend from Castlederg, panel beater Trevor Semple they also decided to purchase an ex Mannion Mk 2 Ford Cortina to service on the event.

John bought it as a make shift service car for the rally, not that he had that many spares to put in it.

For those wondering who was this Mannion man and why did they never hear his name coming up in rally circles before, that’s because he was a priest, the Parish Priest in Castlederg! John bought the local priest’s Cortina which was for sale and came with a set of aftermarket wide wheels.

When John arrived in Galway the place was covered in snow and crews were at odds to get tyres for the event. John decided to put the brand new set of Dunlop Sp Sport Road Tyres from Fr. Mannion’s old Cortina on his RS2000 in an attempt to get a bit of grip.

John at one stage of the Galway Rally recalls leading the event and was just trying to get that car to the finish when the throttle cable broke on the RS2000 three stages from the end. John gave himself a bad cut in an attempt to locate the cable attached to the standard downdraught weber carburettor which was located in a cramped engine bay under the massive standard blue frying pan shaped air filter box.

John did manage to get the throttle jammed opened and got the car home using the ignition key switching it off and on to still manage to finish 7th overall.

Rodney Stewart. Immigration in reverse: From Bondi Beach to Ballybofey! 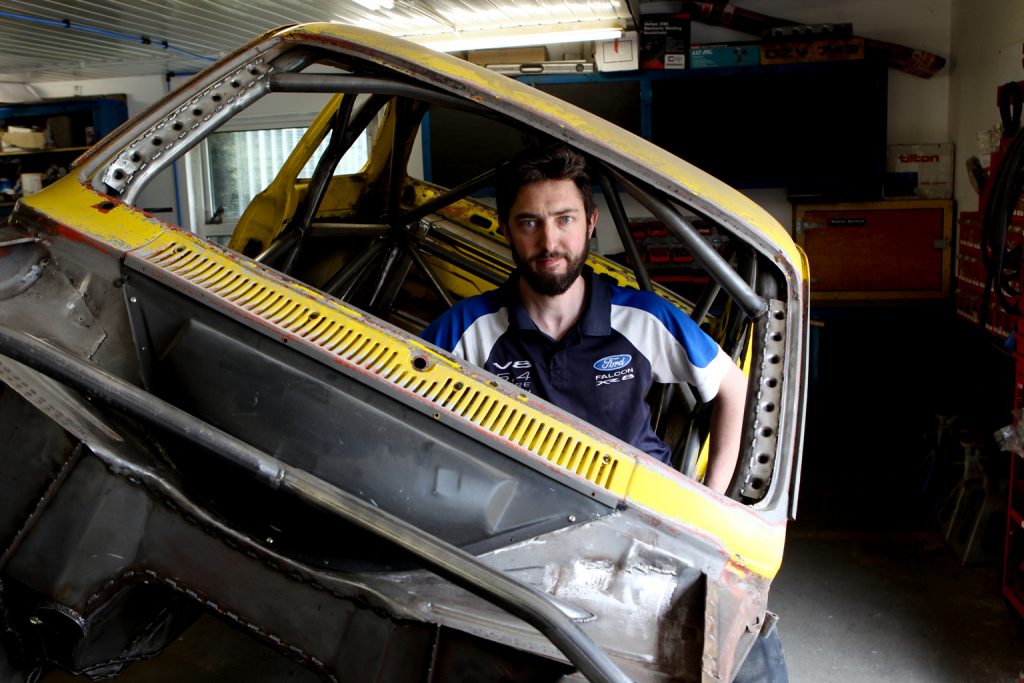 From Bondi Beach to Ballybofey Rodney Stewart at work on one of the imported Ford Escorts shells from Australia at his workshop in Ballybofey. Photo Brian McDaid

What can you say about a car that transcends life? A car that connects one generation with another, one that feels so familiar like a part of our past yet so familiar in Co.Donegal in the present day?

What did Ford know when they decided to pick a family car from its production line to transform it into one of the most iconic rally cars in the world? Now thanks to the skill of a Ballybofey man who is following where Ford finished in the early 80s.

Rodney Stewart is not alone helping to keep a rallying icon alive but is also bucking the trend of emigration and rather than heading to Australia in search of employment, Rodney has taken part of Australia back to Donegal in an effort to make work for himself at home.

Rodney Stewart spent five years in Australia working hard but was thinking of a job at home that he loved so well.

Before he left Ireland he worked on the preparation of rally cars mostly Ford Escorts Mk2s. While in Australia he soon realised that what he had left in Donegal was what he really wanted to do and planned to return some day and set up his own business building rally cars.

While in Australia he hand picked the best he could find in perfectly preserved MK 2 Escorts. When he came home he shipped a container load of Fords to his home in Co.Donegal.

For the most of us that are into our rallying we only have the build up in June and the Donegal International to really enjoy our sport.

When Rodney is not saving the turf he spends his full year working at rally cars. Rodney Stewart opens the doors of his converted farmyard at 7am in the morning. His garage is made to measure for the work that he does. His radio fights for a reception as does his phone which works only if it sits high on the workshop window. Rodney likes that disconnection so he can focus on his work.

Rodney Stewart has no less than 4 escort shells in his work shop at the moment, cars that started life as family cars on the other side of the world. Three of them came all the way from Australia where the dry climate is a lot kinder to these beautiful pieces of Ford history than the climate in Donegal.

However Donegal is not Donegal without a Mk2 Escort and forty years on it’s still the most sought after car to do the Donegal Rally in.

Rodney is mostly focused on a beautiful yellow Mk1 when we called by, also imported all the way from Australia. The car floats a couple of foot above the garage floor, as all good Escort should.

This one is on a rig which makes the hard to access points to work on all that easier.