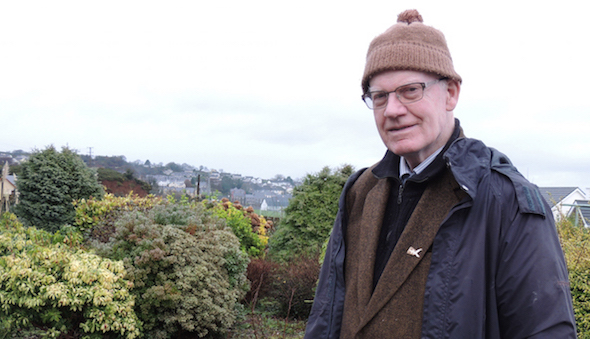 Back to Inishowen after a forty year excursion to Chile!

A Columban missionary priest who returned home in 2016 after close to forty years in Chile says being back in his native Moville is the “fulfilment of a dream”.

After a sixty-year absence and a brush with death from typhoid, Fr John McLaughlin is once again happily living in his hometown. Approaching his 80th birthday, life has come full circle for his retirement.

Fr John thinks it was a “sign from God” that the Columbans had recently been bequeathed a property in Moville, the town he first left in the 1950s but has always loved from afar.

His elevated Summerhill bungalow is a perfect retirement pad, affording spectacular views out over Lough Foyle towards Benevenagh Mountain in the distance in County Derry. A pair of binoculars on the windowsill is perfect for keeping a closer eye on the many passing ships below.

Despite his age [or perhaps because of it], Fr John is determined to “keep active” during retirement and loves to walk – though the cold and wet New Year weather is keeping him confined indoors, where he is recovering from a dose of the cold.

The dull, dark post-Christmas days of Moville are a long way from Christmases past in Santiago or Valparaiso, the two Chilean cities, more than 7,000 miles away, in which he served for almost four full decades.

Fr John recalls one particular Christmas Day when he was called to a funeral at the home of Chilean man who had died. In a poignant and unforgettable moment he witnessed the man’s two sons, who hadn’t spoken for many years, warmly embracing each other over the coffin while everyone else fell silent.

“To me, that was the very essence of Christmas. It was powerful, beautiful to be a part of that.”

Fr John has been a priest now for 55 years, not that you would ever know it. He doesn’t dress like a cleric, except for formal occasions such as weddings or funerals.

“I suppose I have never believed in uniforms,” he laughs.
He says he decided to join the priesthood as a boy after being invited to consider the vocation by Fr James O’Connor.

“There was more of a culture of joining the priesthood here at that time. It was a career that you would have considered. Moville had quite a lot of priests and it would have been quite normal to aspire to be one.”

His mother was Maureen McFeely. His father Charles McLaughlin ran a main street chemist in Moville.

Fr John graduated from Maynooth as a priest in 1963, having been in the same class as fellow Inishowen cleric, Fr James McGonagle, who coincidentally also now resides in the Moville parish.

After fifteen years in the Dublin Diocese through the sixties and seventies, the young priest “wanted something more” however, and actively sought a move away from Ireland.

“I was very open to what was happening in the world and I knew people from my time in Maynooth who had gone to work all over the world, to Peru, Chile, Brazil and Africa.”

After requesting a transfer from then Archbishop of Dublin Dermot Ryan, Fr John was delighted to discover that he would be going to Chile in 1978. He later joined the St Columban Missionary in order to remain there permanently.

“South America was exactly where I wanted to go.”

He says leaving his parents and family was “very tough” but he had a “burning desire” to make the leap.

“I really didn’t want a quieter life in a parish here. I suppose I had a sense of idealism about going away. The experience broadens you.”

The Chilean adventure was almost over before it began however, with Fr John coming perilously close to death after contracting typhoid fever in his first few weeks.

For much of his time, he would serve under General Pinochet’s brutal military dictatorship in Chile.

“It was difficult because there were secret police and informers everywhere. There was a culture of fear and terror. There was a tension all the time, because a lot of people would have supported Pinochet too. They thought he brought a stability to the country.”

He says the Catholic Church worked to improve poorer communities, had a strong social conscience and strongly opposed the Pinochet regime however.

“The Church continually spoke out against Pinochet. Many priests would have supported Allende [the leader of the former socialist government] – and they would have taken risks to oppose Pinochet. Priests were among those who were ‘disappeared’ by the regime.”

Fr John says he often used his own voice from the altar to “directly and indirectly” denounce Pinochet, even though he knew it would “not have been safe” to do so.

“I was very interested in the political system and was heavily involved in what was going on around me.”

The Moville man remembers the “great excitement” when Pinochet was finally arrested for human rights violations while on a visit to London in 1998.

“I can’t understand these people that go to countries and don’t learn the language. They are missing out on so much.”

Fr John – or Juanito as he was sometimes affectionately known – recalls a “real closeness” between the Church and the Chilean people, something he “misses greatly” here in Ireland.

“You were among the people all the time. Lay people were very much involved in everything the Church did. The Chileans would treat you as a man first rather than as a priest first.

They weren’t afraid to fight and argue with you – but at the same time they could take you into their bosom too.”

“People in Ireland are more standoffish but in Chile they would come at you much more. I was very close with many families and I miss that closeness.”

Despite his ‘mucho amor’ for Chile, he had always intended to return to Ireland one day and in 2016 decided to retire from missionary life.

“It became physically and emotionally too tiring for me eventually. In the last parish I was in there were seven chapels.”

Fr John now keeps up with his Chilean friends via Facebook, where he can be found under the ‘Juan Vicente’ moniker; all the commands on his computer are in Spanish.

He is still adjusting to life back in Moville, which, he says, is very different from the Moville he left sixty years ago but still beautiful.

He helps out from time to time with masses in the town, but has plenty of spare time for walks along the shore path as well as the odd round of golf. He is also a regular at the Moville Men’s Shed.

Fr John, who turns 80 in July, is glowing about the people here, many of whom he meets on his walks [weather permitting].

“People are friendly and sociable – almost always with a greeting and eye-contact – on that walk which extends to Greencastle. It has been the source of many conversations and renewal of old friendships for me in these months,” he smiles.

This article first appeared in this week’s edition of The Inishowen Independent and is reproduced by kind permission.

Back to Inishowen after a forty year excursion to Chile! was last modified: January 11th, 2018 by Stephen Maguire
Tags:
ChiledonegalFr John McLaughlinInishowenmoville