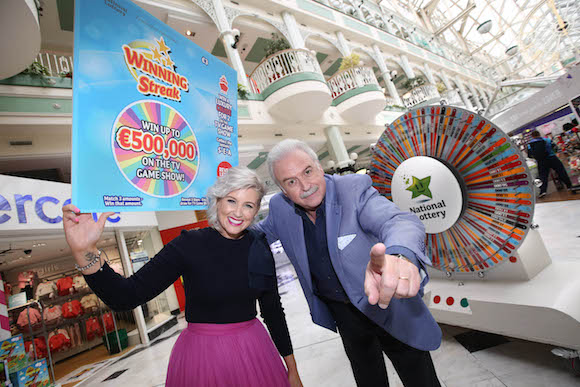 Donegal is on a hot ‘Winning Streak.’

Outside of Dublin the county has the highest number of winning tickets on the RTE gameshow this season.

So far this season the county has 5 winners pulling in a total of €216,000 in prizemoney.

More than €2.1 million has been won by players from all over Ireland to date on this season’s Winning Streak gameshow on RTÉ One, the National Lottery has revealed.

One of Europe’s longest running game shows, Winning Streak returns to our screens this Saturday night, January 13th at 8.20pm on RTÉ One – with five more players hoping to win up to €500,000 on the Grand Prize Wheel.

The top luckiest Winning Streak counties this season so far are:

The popular gameshow, which sees Marty Whelan and Sinead Kennedy on screen for their fifth year together, first appeared on RTÈ back in September 1990 and since then a massive 5,900 people have taken part, winning in excess of €167 million in prizes.

Speaking ahead of the return of this iconic RTÉ gameshow, presenter Marty Whelan said ‘It’s great to be back on Saturday evenings as everyone’s routines go back to normality after the wonderful Christmas break. I’m itching to help the first five Winning Streak players of 2018 to win some New Year cash!! Winning Streak is such a great Irish institution and the fact that it is in its 29th season is a true testament to how it captures the imagination of viewers, both young and old.’

Sinead Kennedy said: “The best part of working on this show is meeting the five players every week and getting to know them. You really get the sense of what appearing on the show means for the participants, their families and friends. It’s amazing fun.”

The Winning Streak gameshow include player’s favourite games including; Fantastic Five, High Low Share, Wheel Reveal and the Grand Prize Wheel, giving five lucky players on each show the opportunity to win prizes of cash, cars and holidays. And the show also features the iconic spinning wheel giving a lucky player a chance to win up to €500,000.

Winning Streak Scratch Cards are on sale in over 5,000 National Lottery agent stores nationwide priced at €3.

Players now have better chances of winning a prize. An amazing 1 in 1.86 tickets have a cash or 3-star prize. A 3-star prize gives players the opportunity to enter a draw to appear on the gameshow and win up to €500,000 on the grand prize wheel.

To enter the draw for the Luxury Cruise for two, players must collect the 3 letters S-E-A from the stub portion of their Winning Streak scratch card and send those into the National Lottery in the special grey stub envelope, also available at National Lottery retail sales agents.

Approximately 30 cent in every €1 spent on National Lottery games go back to Good Causes in the areas of sport, youth, health, welfare, education, arts and heritage. In total more than €5 Billion has been raised for Good Causes since the National Lottery was established 30 years ago.