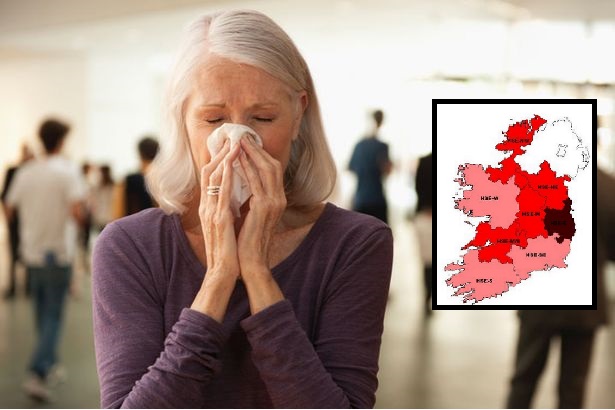 Statistics released by the HSE shows that the ‘Aussie flu’ has spread to all parts of Ireland, with the East of the country being the worst affected.

The maps, which reflect figures collected between week 51 and 52 of 2017, illustrates the rampant spread of the illness.

According to the HSE’s influenza surveillance report, the Aussie flu is currently categorised as having “localised activity” in Donegal. 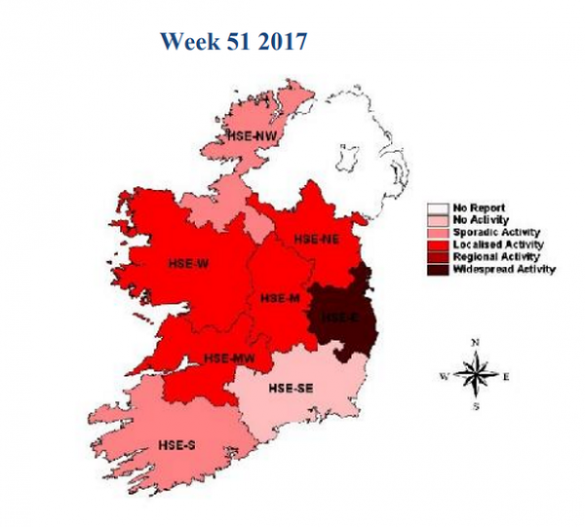 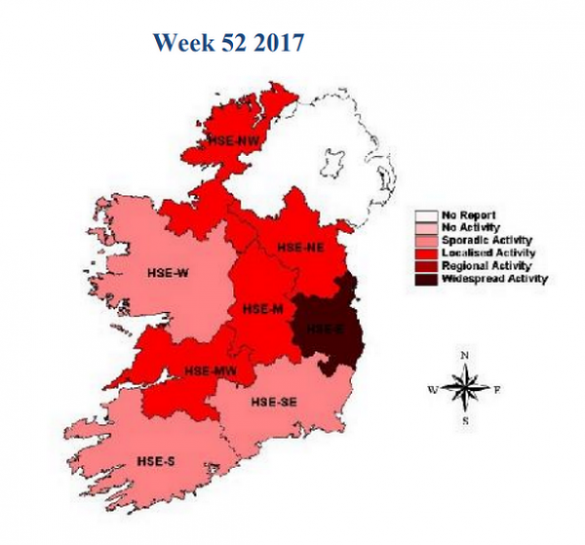 The Health Protection Surveillance Centre has warned that the flu will continue to spread for the next four to six weeks, with Influenza A (H3N2, or the Aussie Flu) and B currently the predominant viruses circulating in the community.

The Department of Education is urging parents to keep ill children at home in an attempt to curb the outbreak.

The HPSC is urging everyone, particularly those in high-risk groups, to get their flu vaccine.

The influenza vaccine is available free of charge from GPs for all people in at-risk groups, and from pharmacists for everyone in at-risk groups aged 18 years and over. An administration charge may apply to people who don’t hold medical cards or GP visit cards.

What are the symptoms?

According to the HSE, the symptoms of influenza usually develop over a matter of a few hours and include a high temperature, sore muscles, dry cough, headache and sore throat.

This is different from the common cold, which tends to come on more gradually and usually includes a runny nose and a normal temperature.

What to do if you become ill

The HPSC says that the number one thing to do if you begin to feel under the weather is to remain at home. Children should be kept home from school and adults shouldn’t try to “tough it out” and go to work as this will lead to a further spread of the flu.

“Anyone who gets flu should stay at home, rest, drink plenty of fluids and use over-the-counter remedies like paracetamol to ease symptoms,” a spokesperson advises.

“If you need to visit your GP or the Emergency Department, please phone first to explain that you might have flu.”

Covering your nose and mouth with a tissue when you cough and sneeze (catch it), disposing of the tissue as soon as possible (bin it) and cleaning your hands as soon as you can (kill it) are important measures in helping prevent the spread of germs and reducing the risk of transmission.

Donegal Daily‘s Medical Matters columnist Dr Ciaran Roarty of Scally McDaid Medical Practice Letterkenny says that our immune system will take care of fighting the virus if you are outside of the high-risk categories.

“Once again we depend on our immune system to clear the flu virus. Treatment is really aimed at easing the symptoms until this happens. The good news is that in the vast majority of cases we can treat ourselves.

“The actual influenza virus makes us feel worse than the other viruses which cause flu-like illnesses. Even the young and healthy often have to go to bed.

“Symptoms of the flu come on quite quickly, are worst for the first few days and then ease gradually. The cough may persist for longer. Most people recover after a week or so.”

Advice, tips, information and videos on getting over flu and other common illnesses are available at a new HSE website, www.undertheweather.ie

Who’s included in the ‘high-risk category’?

The HPSC says that those in the high-risk category could be the most vulnerable to influenza. These include the following groups:

Vaccination remains the most effective means of preventing infection by seasonal influenza viruses and can reduce severe disease that can lead to hospitalisation and death. The vaccine takes two weeks to take effect once received.

Ninety-four confirmed influenza hospitalised cases were notified to HPSC during weeks 51 and 52 2017, bringing the season total to 169.

These hospitalisations were associated with a mix of influenza A(H3N2), A(H1N1)pdm09 and influenza B, with an increased proportion of influenza B cases reported during weeks 51 and 52 of 2017.

Twelve confirmed influenza cases were admitted to critical care units since the outbreak began. “Less than ten” deaths have been attributed to the Aussie flu in 2017.

Medical Matters: Everything you need to know about flu