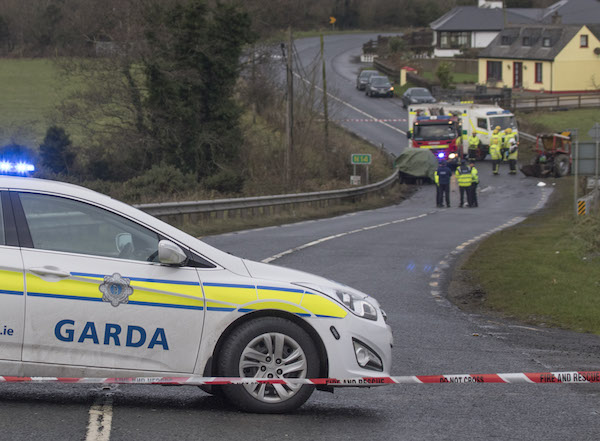 The tragic farmer killed in this morning’s road crash on the main Letterkenny to Lifford road has been named.

He was 68-year-old William ‘Willie’ Wilson from Fr Arnold Terrace in Manorcunningham, a single man who was well-known in the area.

Gardai are still trying to determine the cause of the crash in which Mr Wilson died and another man was injured.

Mr Wilson’s tractor collided with a Seat car being driven by a young man just after 6.30am at Drumoghill.

The emergency services rushed to the scene but Mr Wilson was pronounced dead at the scene.

His body has since been transferred to Letterkenny University Hospital for a post-mortem.

His relatives have been informed of his tragic passing.

The other man involved in the crash was also rushed to hospital but
his injuries are not understood to be life-threatening.

Gardai closed off the road for a forensic examination and put diversions in place.

They have appealed for witnesses on what is a very busy road and who may have seen Mr Wilson in his tractor before the crash to come forward.

A neighbour of Mr Wilson said the entire community has been left stunned by his sudden passing.

“William went everywhere in that tractor. He was a quiet, single man who kept to himself and never did anyone any harm.

“It’s just so sad to think that he died this way,” said the neighbour.

The Mayor of Donegal, Cllr Gerry McMonagle, said the accident was again a reminder of how dangerous our roads can be.

“Every time we go out on the roads we take our life in our hands. While we do not know the circumstances of this tragedy, I would appeal to people to slow down and to drive carefully at all times,” he said.

Donegal County Council has set up the Donegal Road Safety Working Group and appointed a road safety officer in a bid to improve safety on the county’s roads in recent years.

Last year a total of six people lost their lives on Donegal’s roads compared with ten the previous year, 2016.

This is the first road fatality in Co Donegal this year.