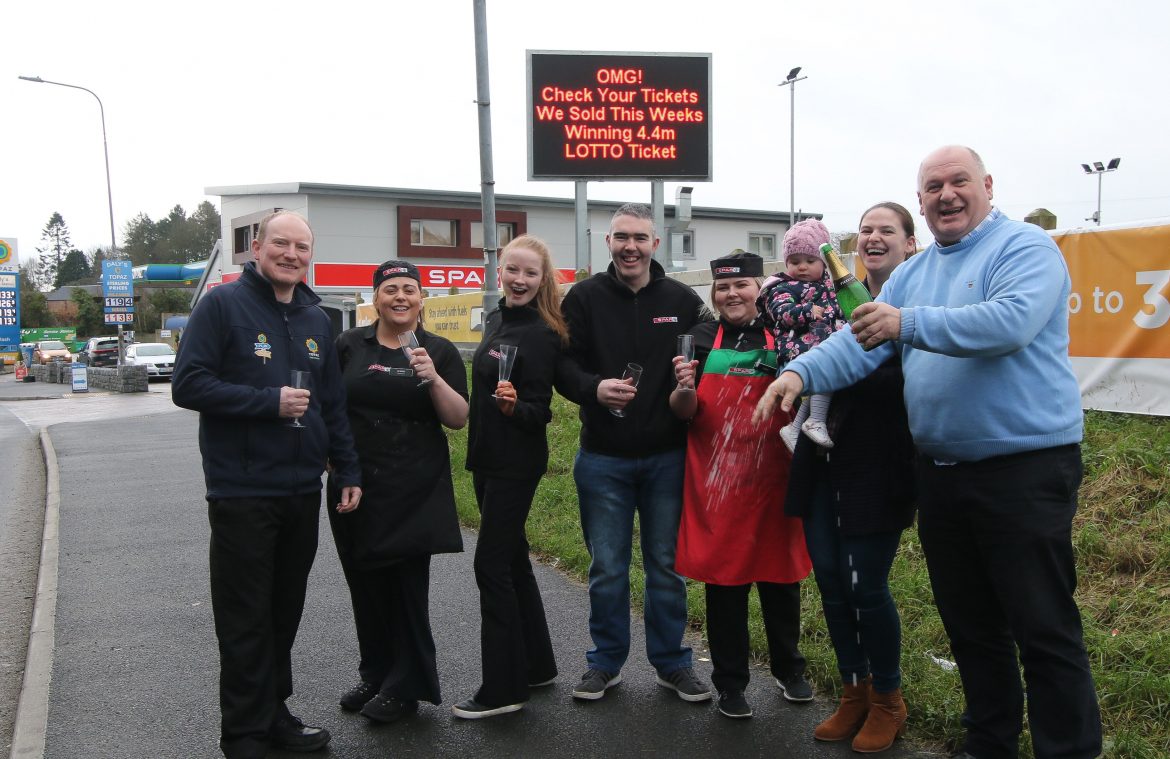 The National Lottery is today appealing to its players in Co. Donegal to check their numbers after last night’s Lotto jackpot of a mega €4,434,994 was won on a ticket bought in Lifford.

The luck didn’t stop there for Donegal as a ticket bought in Carndonagh matched five numbers and the bonus, winning a player €283,274.

The golden Lotto ticket, worth more than €4.4 million, was sold at Daly’s Topaz on the Letterkenny Road, in Lifford, Co. Donegal.

The elated store owner, Austin Daly, said: “I cannot believe it. The call came through last night and it just hit me. It was like a jolt as we immediately started spreading the word to our customers and put the news on a digital sign at the station.

“This morning there is an incredible buzz around the town and I really hope it is a local person who won. All in all it’s a great weekend for Lifford and for Donegal”.

Speaking on the Lotto jackpot win, Dermot Griffin, CEO of the National Lottery said: “They call tomorrow Blue Monday but there will be no Monday Blues for this lucky winner who won the first Lotto jackpot of the year. Last year we had a total of 12 Lotto jackpot wins so this is a great start to 2018 for our players”.

Meanwhile, down the road from Lifford, in Carndonagh, another lucky Lotto player is waking up €283,274 richer after matching five numbers and the bonus in last night’s Lotto draw, falling one number short of sharing the jackpot!

This Quick Pick was sold at G & S Supermarket, Church Road in Carndonagh, Co. Donegal. The ticket was also purchased by the winner yesterday.

Mr Griffin urged all players who purchased a ticket in the Lifford and Caarndonagh regions of Donegal to check their tickets.

He continued: “If you are one of those two lucky ticketholders, sign the back of the ticket and contact the National Lottery Prize Claims Team on 01 836 4444. We are open from 9.15am tomorrow and we will make arrangements for you to collect your prize”.

Approximately 30 cent in every €1 spent on National Lottery games go back to Good Causes in the areas of sport, youth, health, welfare, education, arts and heritage.

In total more than €5 Billion has been raised for Good Causes since the National Lottery was established 30 years ago.