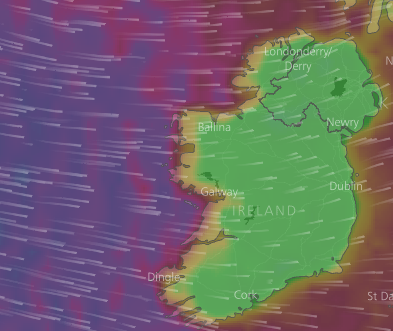 Met Éireann has warned that it will remain windy tonight with scattered, blustery showers.

For the rest of today, they forecast that fresh to strong gusty, south to southeast winds will veer west to northwest later in the night and ease somewhat. Lowest temperatures of 7 to 9 degrees early in the night, dipping to between 4 and 6 degrees by dawn.

A mix of bright spells & blustery showers on Monday some of the showers turning wintry in parts of the N & NW by evening. It will turn colder as the day goes on with temps 4°C in the N to 8°C in the S. W’ly winds will be strong & gusty, reaching gale force along the west coast. pic.twitter.com/nKHvwFPLl3

Tomorrow will be a cold and windy day, with some bright spells and frequent, blustery showers, some of these heavy.

“The showers will gradually turn wintry towards evening, with snow on higher ground. Highest afternoon temperatures of between 4 and 6 degrees in fresh and gusty, westerly winds,” the regional forecast indicates.

For many today’s going to be a little brighter than of late with some #sunshine breaking through ⛅️. However it will start to turn wet 🌧️ and windy 🌬️ from the northwest pic.twitter.com/mkfDlWSP7n

The UK Met Office has issued a status yellow snow and ice warning for Northern Ireland and many parts of Scotland, which will come into effect from 6pm tomorrow (Monday) and remain in place until 11am on Wednesday.

Hail and snow showers may affect eastern parts of Donegal tomorrow and into Tuesday.

The UK Met Office says: “Travel delays on roads are possible, with a small chance of cancellations to public transport.

“There is a small chance that power cuts will occur and other services, such as mobile phone coverage, may be affected.

“In addition some roads and pavements may become icy, increasing the chance of injuries from slips and falls.”