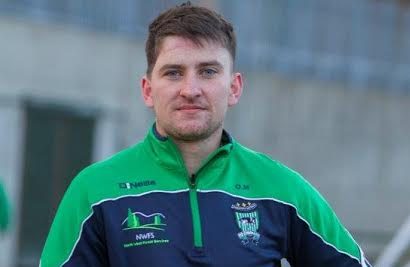 Donegal ‘Miracle Man’ Oisin Merritt scored his first goal for the Ballybofey United senior team – three and a half years after he cheated death in a freak accident.

Merritt – pictured by Joe Boland, North West News Pix – had to have part of his skull replaced after a fall from a balcony in Spain in June, 2014, but in April 2017 he was given the go-ahead to return to competitive sport.

At the time, he described his skull as being ’48 per cent this plate thing’ as he readied himself to hurl with Sean Mac Cumhaills.

This season Merritt returned to play with Ballybofey United in the Temple Domestic Appliances Division One and today he netted to put them ahead against Lifford Celtic at Greenbrae.

Merritt took control of the ball on his chest before rolling home in the 20th minute. But the afternoon had no fairytale ending as Johnny Robb and James McNulty scored with Lifford winning 2-1.

In 2017, Merritt played for the Irish Cerebral Palsy Team at the IFCPF World Championships in Argentina.

Merritt was dubbed ‘The Miracle Man’  by doctors at Son Espases Hospital in Palma after a fall that saw him suffer a broken skull, a broken bone at the top of his neck, five breaks in his jaw, a broken cheekbone, a ruptured spleen and permanent deafness in his left ear.