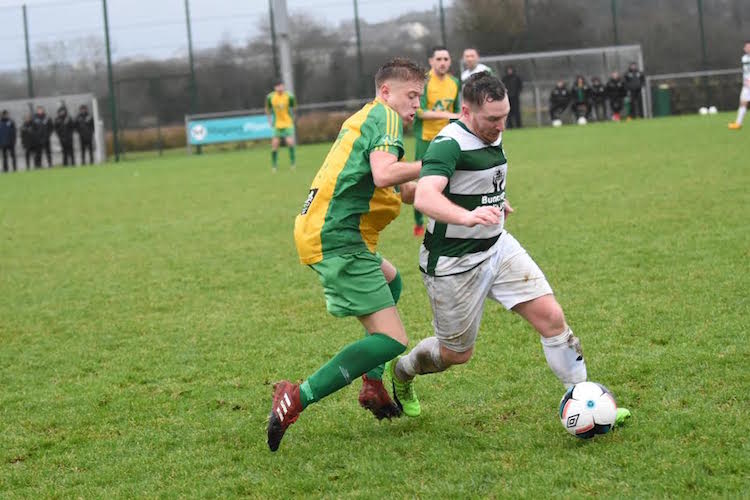 Cockhill Celtic returned to winning ways in the Four Lanterns Ulster Senior with a comprehensive win over Bonagee United at Dry Arch Park.

Mark Moran bagged a hat-trick for Cockhill, who were still smarting from a 2-0 League loss to Fanad United at Traigh-A-Locha pre-Christmas, while Ronan Doherty and Laurence Toland also netted for Gavin Cullen’s team.

Bonagee had new faces in the form of Paddy Quigley, Kevin Barr and Micheál Doherty in their XI, while Cockhill once more welcomed Gerry Gill back to their ranks, the Greencastle man coming on as a sub at the break.

Bonagee were in the game until they gifted Cockhill the opener in the 26th minute. Paul McDermott didn’t get the best of connections on a cross from the right, having got in behind Ciaran Daffan, but Moran steered home superbly from 15 yards.

Doherty tested Lee McCarron from a free kick and an early move saw Dean Larkin and Mark Harkin combine, but the move broke down before Barr could try his luck.

Bonagee handed Cockhill the chance to double the lead on 35 minutes – and the champions made no mistake. Glenn Gallagher’s co-ordinates were off as he attempted a ball across the Bonagee rearguard. Caillin McLaughlin, his partner at the heart of the defence, didn’t get to it and Ronan Doherty pounced to double the lead.

Quigley saved from Ryan Varma just before the break while Jimmy Bradley rattled the post as Cockhill went for the kill.

The Inishowen men doubled the lead on 63 minutes as they hit three goals in eight minutes. Moran drilled home from a penalty after Quigley was deemed to have taken down Bradley.

From a Gill corner, Moran got the better of Quigley for the fourth, and his third, while the coup de grace was added by Toland.

The Ramelton man, from on the right-hand side and well outside the area, Toland soared a majestic effort beyond the reach of Quigley.