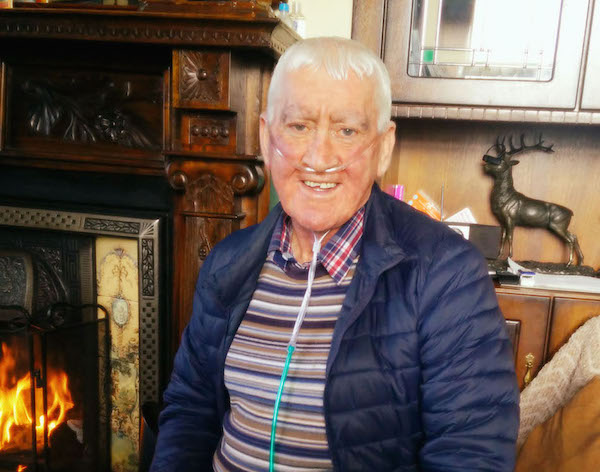 A West Donegal man has said that a lung transplant would change his life forever.

In an interview today on Barrscéalta on RTÉ Raidió na Gaeltachta today, Paddy Ó Maoilchiaráin from Gort an Choirce, called on people to carry organ donor cards and spoke about how a new lung would change his life.

Paddy became ill with shortness of breath in 2013, and he has been on the transplant list since April 2017.

He said “It’s very difficult sometimes … You’re not able to do what you’d like to do. You might walk out to the car, but then you’d have to sit for five minutes to get your breath back… I might go up the stairs and then I have to sit for five minutes. And I always, always have the oxygen here going into my nose, I’m using it all the time, day and night. There’s no getting away from it.”

Paddy explained how he had been called up to Dublin before Christmas as a set of lungs had become available, but unfortunately he was not the best match.

“There were three of us in total, and the one who was the best match would get the lungs. They came in and told me that unfortunately I wasn’t the best match, that there was another closer match and that I’d be going home. It was a bit difficult at the time, but I said to myself at least someone will get the benefit and that maybe my day was coming soon.”

Paddy, who is 57, has 60% capacity in one lung and 40% in the other, and his medical team are hopeful to get one good lung, and that that would be sufficient.

“I think if I got a good lung that was 100%, I think I’d have another life altogether.”

Paddy, who is on the lung transplant waiting list, said he would encourage everyone to carry a donor card.

“I think it’s a great thing and that everyone should carry the card. I never thought about it myself until I got sick … but I think everyone should have one, it might help someone.”

Paddy told Áine that he lost five and half stone in weight with Slimming World in order to be eligible for the transplant. He was working up until last year as a bus driver with Joe Mangan until he had to go on oxygen, a job he loved and that he misses greatly.