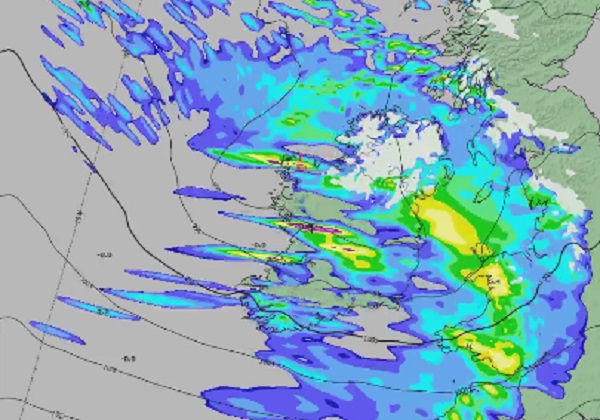 Met Éireann has forecast that more snow is on the way for Donegal tonight, with “significant accumulations” expected.

Today will remain cold with scattered showers, some heavy, of hail and thunder. Showers of sleet and snow are also forecast, with wintry showers being confined to higher ground later in the morning. Fresh to strong and gusty westerly winds are also forecast today, with highest temperatures of 3 to 5 degrees.

More snow is on the way tonight as a “deepening depression” casts over Donegal, with lowest temperatures of 0 to 3 degrees.

“A deepening depression will track eastwards across the province early tonight, with its centre over southern parts. This will give rise to moderate southeasterly or variable winds at first, and heavy rain and snow, and with some significant accumulations likely,” the Met Éireann regional forecast indicates.

“The winds will become north to northeasterly before midnight, increasing strong and gusty, becoming west to northwesterly after midnight, decreasing moderate to fresh and with the rain and snow clearing eastwards.

“Showers will follow from the northwest overnight; turning heavy and some will be wintry over higher ground.”

The UK Met Office has issued a snow and ice yellow warning for Northern Ireland, which will also affect the eastern parts of Donegal. 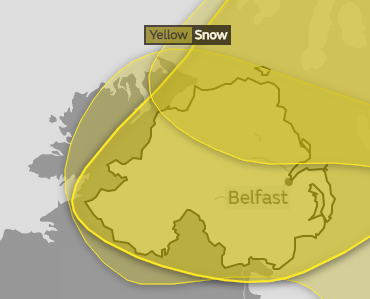 They forecast high accumulations of snow on higher ground (above 200 to 300 metres) of 10cm to 20cm. On low ground levels, 2cm to 8cm will be expected, with a few places seeing very little.

“Strong winds bring the potential for temporary blizzard conditions and drifting of lying snow, mainly over high ground,” they warn.

The UK Met Office’s warning for Northern Ireland will be lifted at 6pm this evening.

Tomorrow will also be cold and blustery according to Met Éireann, with hail and thunder showers expected. Some of the showers will fall as sleet or snow over higher ground. Highest temperatures are estimated to fall between 3 to 5 degrees tomorrow.

A Status Yellow weather advisory is currently in effect for Donegal, as Met Éireann forecast high seas which may lead to an increased risk of coastal flooding. This warning is valid until 9am tomorrow morning.

One of the strongest wind recordings taken yesterday was at Malin Head, with wind reaching 102 km/h. The wind warning for Donegal has now been lifted.

Heavy, wintry showers overnight has led to the roads being slippy this morning, with motorists urged to travel with caution.

If you would like to send us your closure notices/road reports, please email info@donegaldaily.com