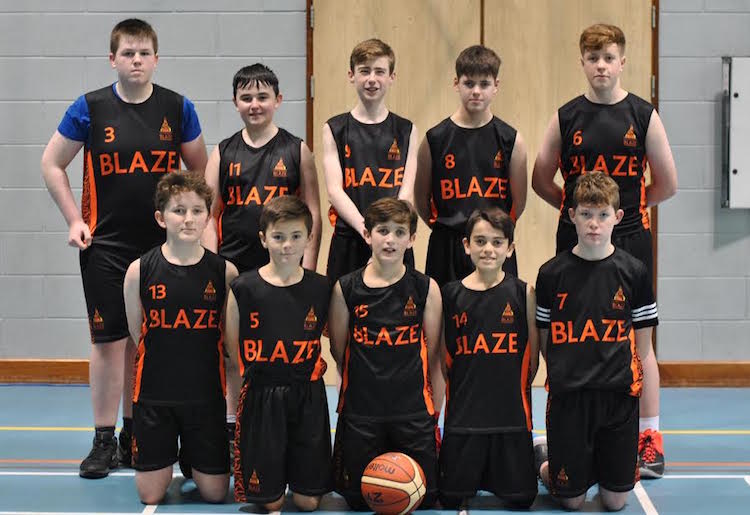 Great effort and hard work this weekend by our u 14 boys gained us the upper hand in 2 close wins.

on Saturday, they displayed a very tight 27-24 home win v Donegal Town where the boys did not show their true capabilities but made up for that in Sunday’s game!

Sunday showed them maturing as a team. Having been beaten convincingly in the first game of the season to Phoenix at home, the boys had a point to prove.

Excellent teamwork, commitment and discipline, most especially was needed for the gutsy win in Belfast v Phoenix.

Particularly deserving of mention were Oisin Ward who did a fantastic man marking job on the usually dominant Ben Martin, crucially keeping him out of the game.

Outstanding particularly on offence were Evan Mc Loughlin and Liam Dowling who really took it to the boards with 13 and 18 points a piece. Rowan Smith showed excellent control from the top of the key.

Outline of the game – They started well and were 12 – 11 down after the first quarter. A hard fought second quarter saw them 23 – 19 down at HT. The third quarter saw them continue to fight hard but still trail by 5 points going into the final quarter.

The boys showed their fighting spirit in the final 7 minutes and went on to win that quarter by 10 – 3.Overall an excellent team performance, well done team! 35-33 final result.

The U14 boys Development Team played Donegal Town on Sun in a home game in the convent. It was a tight and tense match and unfortunately, Blaze were not the final winners.

It started well and the first quarter was close with 2 good baskets from Ernest Moscici and one from Finnian Lynch.

The game got very competitive and Blaze were determined and showed a great display of teamwork with good passing and defence.

The second quater did not go Blaze’s way and Donegal Town got a strong lead before half time to 17 – 6.

Blaze kept their cool and determination and fought hard for the last 2 quarters winning both with scores of 10-5 and 8-5.

Good scores from Brendan Sweeney, Rueben Grimes, Luke Doherty as well as a few more from Ernest and Finnian. A strong display of defence and energy from the whole team.

Having lost to Ballyshannon by a basket in November, the U12 boys travelled for their away game feeling hopeful, determined and ready for a good match against Ballyshannon.

The boys started well and in a confident mood scoring the first two baskets. Ballyshannon soon found their rythem on their home court and picked holes in the Blaze defence, scoring many a basket through the open centre.

Unfortunately for Blaze, scoring chances close to and under the basket in the first half were frequent, but..they did not drop! Ballyshannon led 20 – 12 at the end of the first half.

The second half saw a stronger defence by Blaze, preventing Ballyshannon from scoring and only conceded 3 baskets, but this was the tale of this half as both teams failed to convert their chances.

This half also had good rebounding and outlet passing by the Blaze players. However, this was not enough in order to pull the game back to within their reach. Away form, and a bit of luck, yet to kick in. Final Score Ballyshannon 26 Blaze 13.

The girls got off to a great start with Emily Mullen, Sineid Otoo and Maria Kealy putting up good scores and great work under the boards by Emily Irwin and Aoibhin Franklin. They led 17-1 at the end of quarter 1.

The second half was more of the same with the Blaze girls working well together at both ends of the court. Sligo were without some of their regular players but they battled well and kept fighting. Blaze were too strong however and ran out worthy winners.

This was a one-sided game as the score suggests but credit to a very young Newry team for battling hard to the very end. The game was over at half time after a succession of fast breaks and some great steals on defense that were converted to scores by the Blaze girls. This was a great team performance by the 12 Blaze girls.