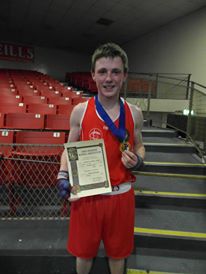 Boxing – All Donegal bout to raise sparks at U22 Championships

Bryan McNamee (above) from Convoy ABC meets Patrick McConigley of Letterkenny ABC in an eagerly-awaited clash. McConigley dispatched Shane Dooley 5-0 last weekend to advance to a meeting with McNamee.

The sparks will fly as the two Donegal punchers meet for a place in the last four of the U22s. There is no shortage of Donegal interest in the U22s which are running alongside the U18 Open at Irish boxing’s HQ.

Italy marks the inaugural occasion that the European Youths will be a joint male and female Championships.

In the U18 Open tomorrow night, Dunfanaghy’s Ciara Craig takes on Dearbhla Rooney of the Sean McDermott BC, with the winner to face Tramore’s Zara Breslin in a semi-final. Carndonagh’s Labhaoise Clarke is already through to the 57kgs final and will await Craig, Rooney or Breslin in the decider.

Dungloe’s Fionnan Rodgers has an U18 Open semi-final against John Paul Hale on Saturday. Last weekend in a quarter-final, Rodgers defeated Michael Hutchinson from Tipperary Town.

Dunfanaghy colleague Sean Kelly lost to Ballinacarrow’s Dean Clancy in an U18 quarter at 52kgs while Kenan Gibson from Convoy was beaten by Virginia’s Thomas Maughan in an U22 quarter-final at 81kgs.