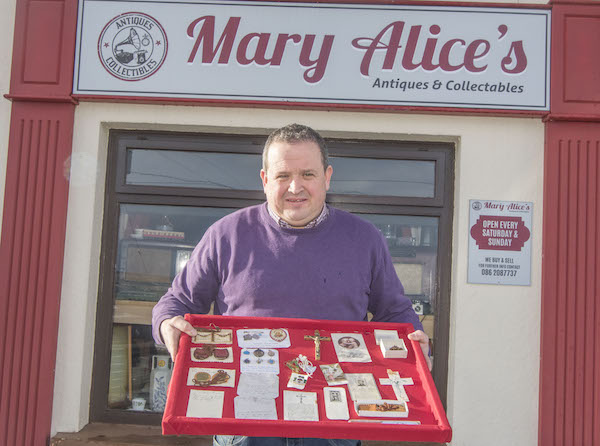 A part-time antique dealer has struck gold after buying what could be a rare collection of Michael Collins memorabilia in an old cigar box – for just €14!

Well-known Letterkenny man Michael ‘Cliffy’ Kelly wasn’t sure what he had purchased when he bid in an online auction for the old cigar box.

The box was auctioned among a lot of more than 600 items by Purcell’s Auctioneers in Birr, Co Offaly just before Christmas.

Remarkably Mr Kelly, who runs the weekend antique shop ‘Mary Alice’s” in the Co Donegal village of Churchill, didn’t plan on going above his €14 limit.

The shop is named after his wife’s grandmother Alice Callaghan who came from Glendowan.

He revealed “I didn’t plan on spending much more than €14 because it was just an old cigar box and I didn’t even realise it contained anything.

“With another five euro for commission, that brought it to about twenty euro so I wasn’t planning on spending any more than that.”

But when Michael, 44, was sent the box, he realised the chance of a lifetime had come his way.

“It was a lovely cigar box but when I opened it up and realised after a couple of minutes what was in it, I was trembling,” he said.

He showed the box to his brother Kieran, a local historian and schoolteacher, and he confirmed that the contents could be of historical significance and certainly were a find.

On closer examination it turned out that the box contained several personal items belonging to Kitty Kiernan, the one-time fiancee of the ‘Big Fella.’

The contents include letters and even a Christmas card to Michael Collins from Kitty.

The festive card with the verse ‘Christmas Greetings. May the joy of St Joseph be yours today’ is signed by Kitty and says “Michael, We Will miss you always, K’

Among the other items in the box were religious medals which had been sewn into the blankets of the hunger strikers in the Maze Prison.

All the items are perfectly preserved in the Vega Fina cigar box which has its own humidifier.

Mr Kelly, who is also a financial adviser for Acorn Life, plans to approach the National Archives to inform them about his find so the items can be recorded.

And he says his find is certainly not for sale.

“You come across something like this once in a lifetime. They’re not for sale. They can be viewed at Mary Alice’s in Churchill at weekends and I’ll be delighted to show people a bit of our history,” he said.