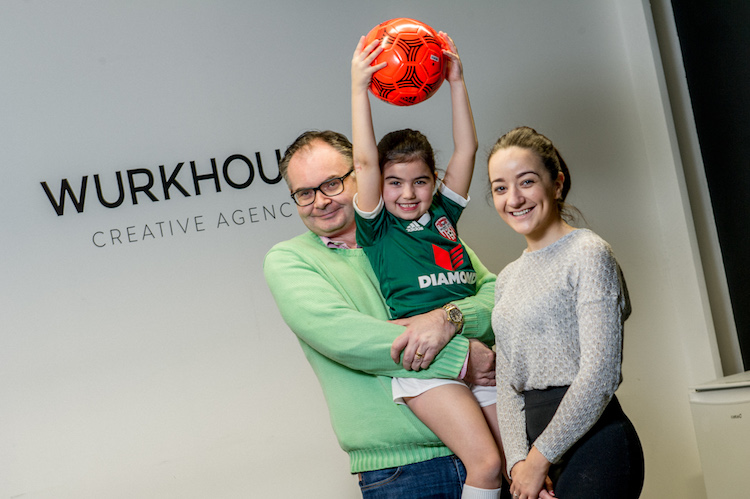 Based at Catalyst Inc. on the former Fort George site at Bay Road, Wurkhouse currently employs 20 locals and is the biggest digital agency in the North West.

Wurkhouse have not only pledged a five figure sum to the club, but they will also take an active role with the ‘City Cubs’ programme which is open to all children of primary school age and gives members the chance to get more involved in the life of Derry City F.C.

“It is important that we support local organisations that promote things that are central to our community and the development of our children. Team sports were a big part of my life growing up – I played soccer almost every day, and learned the importance of taking part, the desire to win and how to achieve that being part of a team.

“The sponsorship is a great opportunity for us to enhance our commitment within the local community. The club shares our values in relation to promoting healthy competition, passion and supporting the City. The affiliation was a natural fit for Wurkhouse and we’re looking forward to playing an active part within the club.”

Orlaith Meenan, DCFC Commercial & Marketing Manager, said they are delighted that Wurkhouse has come on board in a three-year sponsorship deal

“Having another local business who wants to give back to the community so strongly, is exactly what this club is about; it fits in with our ethos of ‘Your club, your City, your legacy’,” she said.

“Not only have they backed us financially, but their eagerness to be a part of Derry City and how we integrate ourselves in the community is fantastic. I am really looking forward to developing the relationship with Troy and his team over the next three years.”

The latest news follows the recent announcement of 30 new digital jobs at Wurkhouse over the next three years.