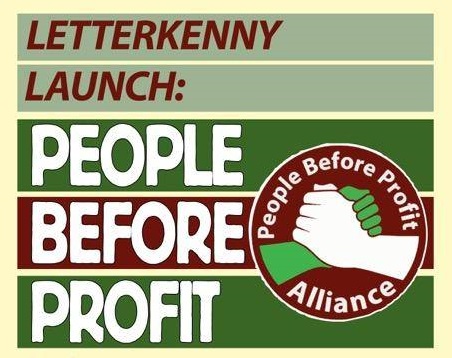 People Before Profit branch to be launched in Letterkenny

Political party People Before Profit are launching their new Letterkenny branch on Tuesday.

Speakers include Kieran Allen, National Secretary PBP, and Cyril Brennan of the Ballyshannon branch of PBP, who is heavily involved in the Still Waiting Campaign for urgent reform in the health service.

The party was founded in 2005 by members of the Socialist Workers Party. The liberal party operate in both Northern Ireland and the Republic of Ireland.

Finnian O’Donnell, Letterkenny branch organiser, believes it is time for an alternative.

“For too long Donegal has been neglected by the mainstream parties. PBP believe it is time local people’s voices are heard.

“We are keen to hear from locals on the issues that matter to them. PBP continues to be at the forefront of campaigning for change. We look forward to welcoming new members.”

People Before Profit branch to be launched in Letterkenny was last modified: January 21st, 2018 by Elaine McCallig
Tags:
branchlaunchletterkennyPEOPLE BEFORE PROFIT