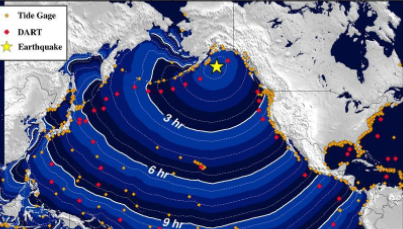 Relief as Tsunami warnings cancelled in the US and Canada

A tsunami warning issued for Alaska, Canada and the West Coast of the USA earlier today has been cancelled.

A major 7.9 earthquake struck 155 miles off the coast of Alaska on Tuesday morning which sparked fears of powerful and destructive waves on the Pacific Coast.

People in Anchorage were urged to evacuate to higher ground in anticipation of the waves, while British Colombia and Washington, Oregon and California were placed under a tsunami watch.

The National Tsunami Center has now cancelled the alerts after waves failed to materialise off Alaska. Parts of Alaska remain under an advisory.

Relief as Tsunami warnings cancelled in the US and Canada was last modified: January 23rd, 2018 by Rachel McLaughlin