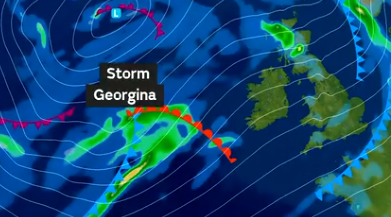 A night of severe winds and heavy rain is in store tonight as Storm Georgina tracks to the north west.

Wind warnings have been issued for the entire country, with rainfall warnings in place for Donegal, Galway, Leitrim, Mayo, Sligo and Clare.

Tuesday night and the early hours of Wednesday morning will see strong winds of 55 to 65 km/hr and gusts of  110 km/hr in some areas, with widespread heavy rain of 25 to 35mm creating a risk of spot flooding.

Motorists are advised to watch out for flooded roads and be aware of the risks of aquaplaning. The rain warning is valid from 10pm today until 10am tomorrow.

The rainfall is due to ease off by Wednesday morning to bring a bright and blustery day.  Scattered showers may have a risk of hail and thunder, Met Eireann warns.

The RSA has shared the following advice for drivers during flooding incidents:

Met Eireann have issued a yellow weather warning for Donegal, Galway, Leitrim, Mayo, Sligo and Clare for 25-35mm of rain from 10pm tonight until 10am tomorrow. Watch out for flash flooding and the risk of aquaplaning. pic.twitter.com/8Z4SNFxB0p

Storm Georgina on her way to the north west with wind and flood warnings was last modified: January 23rd, 2018 by Rachel McLaughlin
Tags:
Met Eireannstorm georginaweather