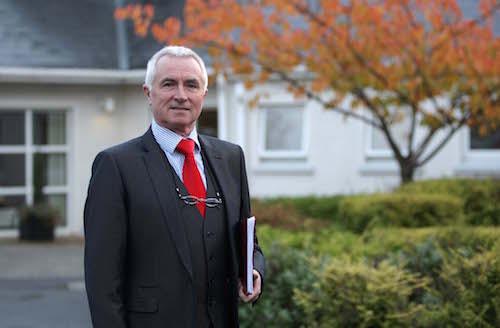 Dr. James McDaid has confirmed he has stepped down as Chairperson of the Donegal Hospice.

The Letterkenny GP said that he had served five years in the position and that it was time for change stating no member of an executive committee should remain longer than that period.

Secondly, he said that his decision to cut ties from the Hospice will give him more independence in pursuing answers from the Good and New cancer charity and its recent controversy.

He said that having been deeply involved with raising funds and with the founding of the Donegal Hospice since 1988, he was acutely aware that their independence and integrity had to be fully protected.

Dr McDaid told the Tirconail Tribune that he had tried to engage with the Good and New charity with regard to transparency ever since 2015.

However, he had come to the conclusion that he could deal with these issues more independently while ensuring the Hospice was not dragged into the controversy by giving up his responsibilities and role as their Chairperson.

Dr. McDaid said that he wanted to make it very clear that he had not made any allegations against the Good and New company.

He said he was searching for answers to basic questions raised and in finding a paper trail that could convince him and those who’d raised this issue with him as their doctor and a fundraiser, that all monies donated are fully accounted for and that the company will engage with their support base in the process of clarification.

He said that he’d addressed a number of questions to all interested parties in the Good and New charity including not joining the governance of the Irish Cancer Society in 2010: purchasing a 33 seater coach as the Altnagelvin Radiotherapy unit was coming onstream to serve Donegal and why a company limited by guaranteed said that part of that process was to own a property.

He stated “I am shocked by the response that I’ve received from the charity’s public relations company which reads: “The Good and New Charity has, for the past month, been pursued by the media and has answered all questions put to the charity.

“The Good and New charity is not going to engage in discussion between two local charities, which is what this is now deteriorating into. The public are entitled to support whatever charities they wish. We are always happy to consider applications for new board members to be part of moving the charity forward, and in turn be involved in all the day-to-day dealings of the charity.

“We have referred your email to the Charities Regulator and should you have further queries perhaps you would address them to that office.”

Dr. McDaid said it was factually incorrect to say that the Good and New charity is not going to engage in discussion between two local charities, which is what this is now deteriorating into’.

“I have never sought to represent or involve Donegal Hospice in this matter. I’ve stepped down as Chairperson and again I must emphasise that Donegal Hospice was never part of this controversy.

“On another point I was appalled to read the original story in the Sunday Times about the amount of money held by Good and New as they continued to seek donations to keep the cancer bus on the road.

“Since then I’ve had 37 queries from my patients and the public seeking assurances about transparency and I owe it to all of them to try and find answers,” he said.

In his latest correspondence to the public relations company representing Good and New, Dr. McDaid said he cannot accept the assertion from Good and New that all questions have been answered or that they (GnN) are not going to engage in discussion between two local charities.

“Obviously you were unaware that after 30 years I have stepped down from my position, on account of that specific point.

“I would never want the Donegal Hospice embroiled in this unsavoury situation As a matter of fact it was Donegal Hospice policy during my tenure not to share any fundraising activity or share a presentation event if this (GnN) charity was involved. In some instances there was some overlap because we were not made aware of their presence.

“As so many people have written/contacted me (including former voluntary workers and patients who used the bus) I feel I have no option but to try and get answers to their questions, ie where did all the money go?

“I am glad to know that you referred my questions to the Charity Regulator. I will of course forward them also … however I understand the office of the Regulator is to investigate areas of “charity fundraising fraud “ and none of my questions involved that particular issue.

“My questions were raised by disappointed people who had worked so hard to raise hundreds of thousands of Euro to help the cancer patients of Donegal.

“Perhaps you might persuade Good and New to discuss these concerns in public. People want answers and to be reassured that their efforts went to those intended,” his statement concluded.

He told the Tribune that not one of his 14 questions had been addressed. He said his queries are fundamental for all charitable organisations and he’s mystified why there has been no satisfactory response.

He said that where any group or individual has a concern about their donations or contribution they should put those matters into the public domain in order to address issues surrounding transparency and to be assured that governance is in compliance with the regulations for charitable groups.

He has claimed that the press statement for Good and New issued on December 20th last by a Dublin based public relations company is inaccurate and must be addressed fully.

The statement read: “The charity is an association and has a registered charity number (as per above) but is moving to a company limited by guarantee structure which was a legal requirement to purchase the property.”

“I have challenged the accuracy of that statement because there is no such obligation” he commented.

Dr. McDaid said: “In the light of stories in the Sunday Times, the Good and New cancer charity needs to provide total clarity and transparency on their work and insofar as I am concerned have not found that detail in their response on December 20th last year.

“Every donation, to every charity group should have a paper trail with a receipt to match all the contributions. Insofar as I am concerned this confirmation is needed to ensure that the concerns I’ve heard are cleared up, once and for all. So far that has not happened.

“As someone working with charities, collecting and accounting for donations over many years, I feel that I have a responsibility to ensure the confidence and trust placed in all our voluntary groups in Donegal are explicitly honoured with full accountability.

“In light of the questions raised by the public with me about the failure of Good and New to respond to the queries on transparency and their lack of a paper trail for cash donations I have no option but to continue to seek answers and to keep asking questions,” he added.

Good and New told the Tribune their company is in the process of seeking charity status and is working with the Charity Regulator to finalise same.

“This process can take some time hence the charity is still operating as an association until this process is completed,” added their statement.

The new Chairperson of Donegal Hospice is Grace Boyle.

Dr. McDaid proposed that no Chairperson should serve for longer than a five-year period and that new directors should be appointed every three years.