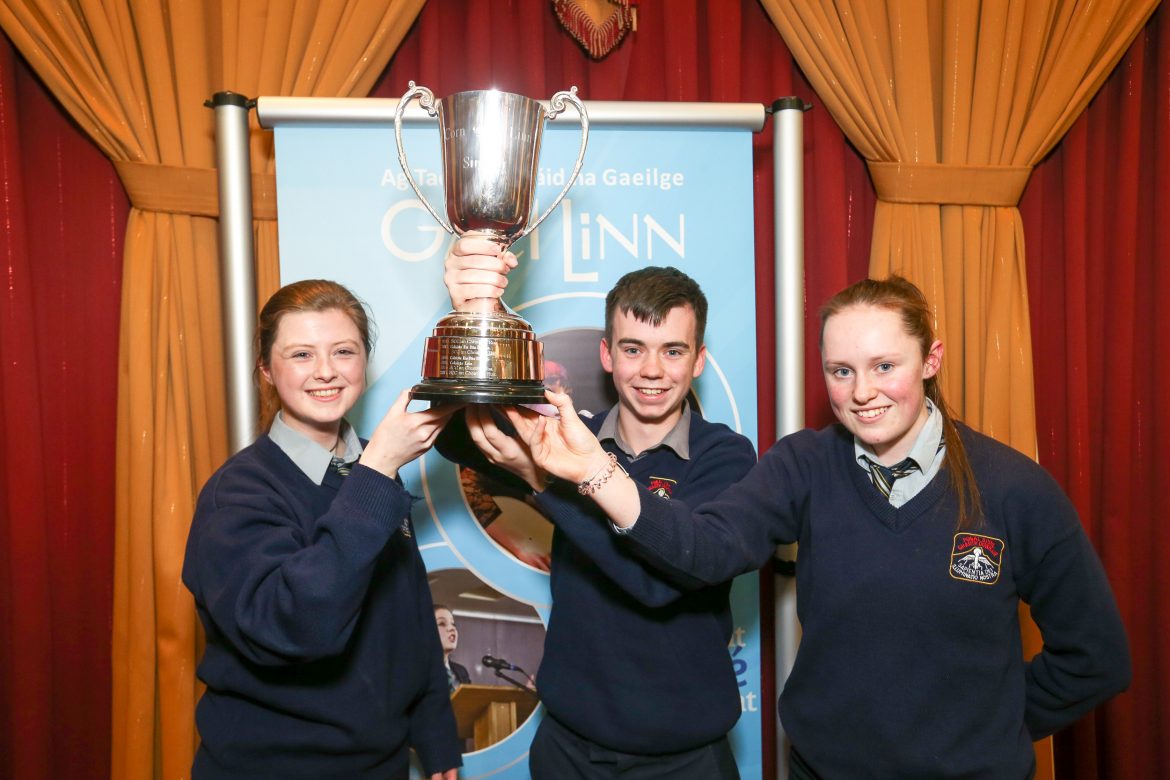 The Pobalscoil Ghaoth Dobhair senior debating team had a great start to Bliain na Gaeilge following their win at the All-Ireland Final of Comórtas Díospóireachta Uí Chadhain on Wednesday, 24 January.

The event was held in the Lucan Spa Hotel, Dublin, and there was a large audience in attendance for what was the climax of this year’s competition.

Comórtas Uí Chadhain is organised annually by Gael Linn, with funding from Foras na Gaeilge for Irish-medium schools nationwide, with over 50 teams participating since October last.

‘Tugann na mórmheáin chumarsáide in Éirinn léargas cruinn ar a bhfuil ag tarlú!’ ( The mass media in Ireland give a true account of all that happens!’ )  was the motion in the senior section of the competition.

There was very little between the teams, which posed a challenge to the adjudicators (Áine Hensey, Seán Mac Labhraí, Siún Ní Dhuinn, Cathal Póirtéir and Fergus Ó Conghaile in choosing the winners.

In the end, it was the Donegal team- Laura Ní Dhuibhir, Clódagh Ní Ghallchóir and Tarlach Ó Dochartaigh, Pobalscoil Ghaoth Dobhair- who came out on top!  Pól Mac Cumhaill was the proud teacher who guided the team through the various heats to their All-Ireland win. 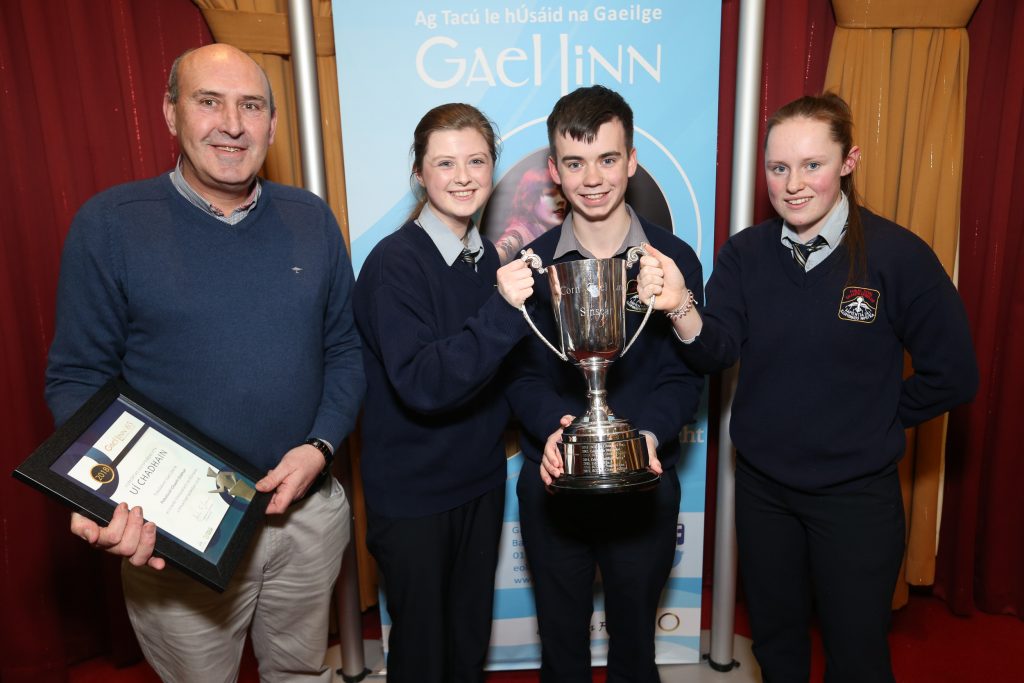 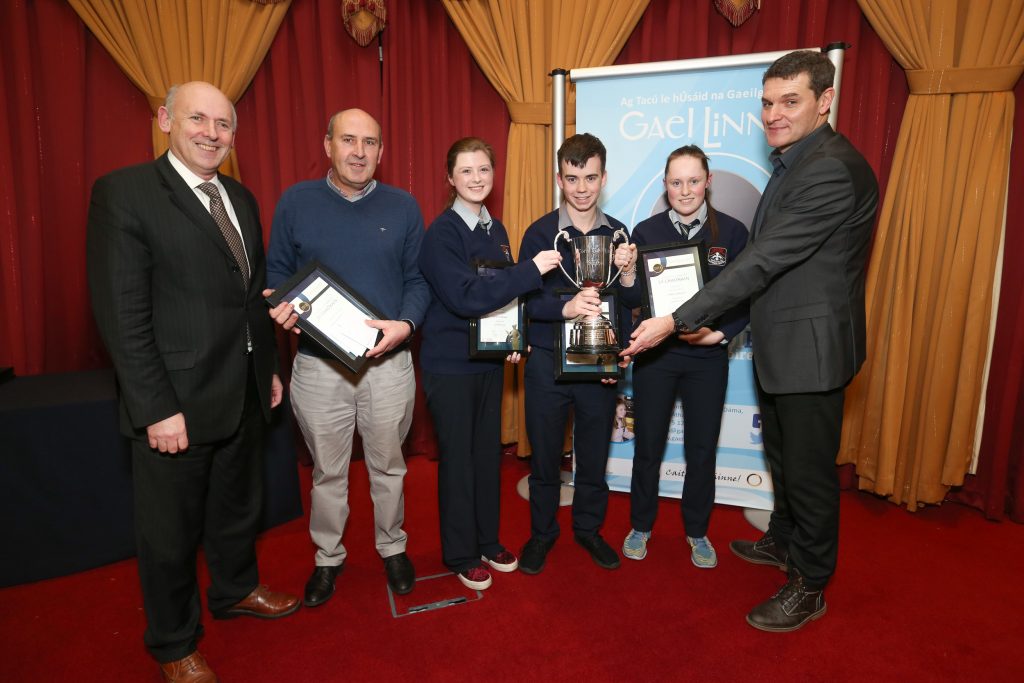 The topic up for discussion was ‘Anois an t-am dár gcuid eisimirceach filleadh abhaile go hÉirinn!’ ( Now is the time for our emigrants to return home to Ireland!’) and the speakers displayed excellent debating skills throughout.  The adjudicators were won over in the end by the arguments of the Scoil Chuimsitheach Chiaráin team, Colm Mac Donncha, Anna Nic Dhonncha and Caoimhe Ní Thuathail .

RTÉ News Reporter, Joe Mag Raollaigh, was the guest chairperson for the event.  He praised all the teams for the high standard of debating they had attained.  He expressed particular interest in what the senior orators had to say on the subject of the media in these days of ‘fake news’, and congratulated them on their knowledge of current affairs.

Gael Linn CEO Antoine Ó Coileáin congratulated the winners on their great achievement and said: ‘This year marks Gael Linn’s 65th anniversary and we have always had as a priority that pupils acquire high levels of competence in spoken Irish and that they have a positive attitude towards Irish. 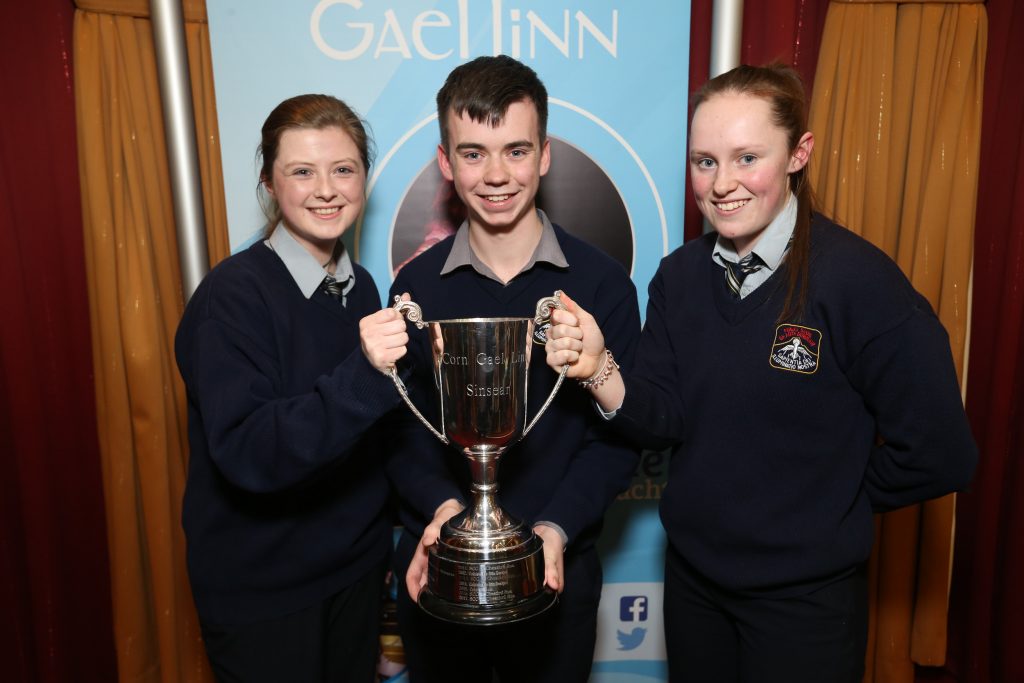 ‘We are very pleased with the level of entries in Comórtas Uí Chadhain and delighted with the high standard of debating skills shown by students. We are greatly indebted to teachers for their enthusiastic support for the debating competition’.

He presented the winning teams, both junior and senior with the Gael Linn Perpetual Cups, along with prizes of €1,000.  The other finalists were each awarded prizes of €250.

Many well known people have taken part in Gael Linn debating competitions down through the years, including broadcasters and journalists Claire Byrne, Marian Finuncane, Mary Kennedy, Evanne Ní Chuilinn and Harry McGee. There is no doubt but the debates inspired a love for the Irish language in them, and that the skills they learned stood to them in their chosen careers.