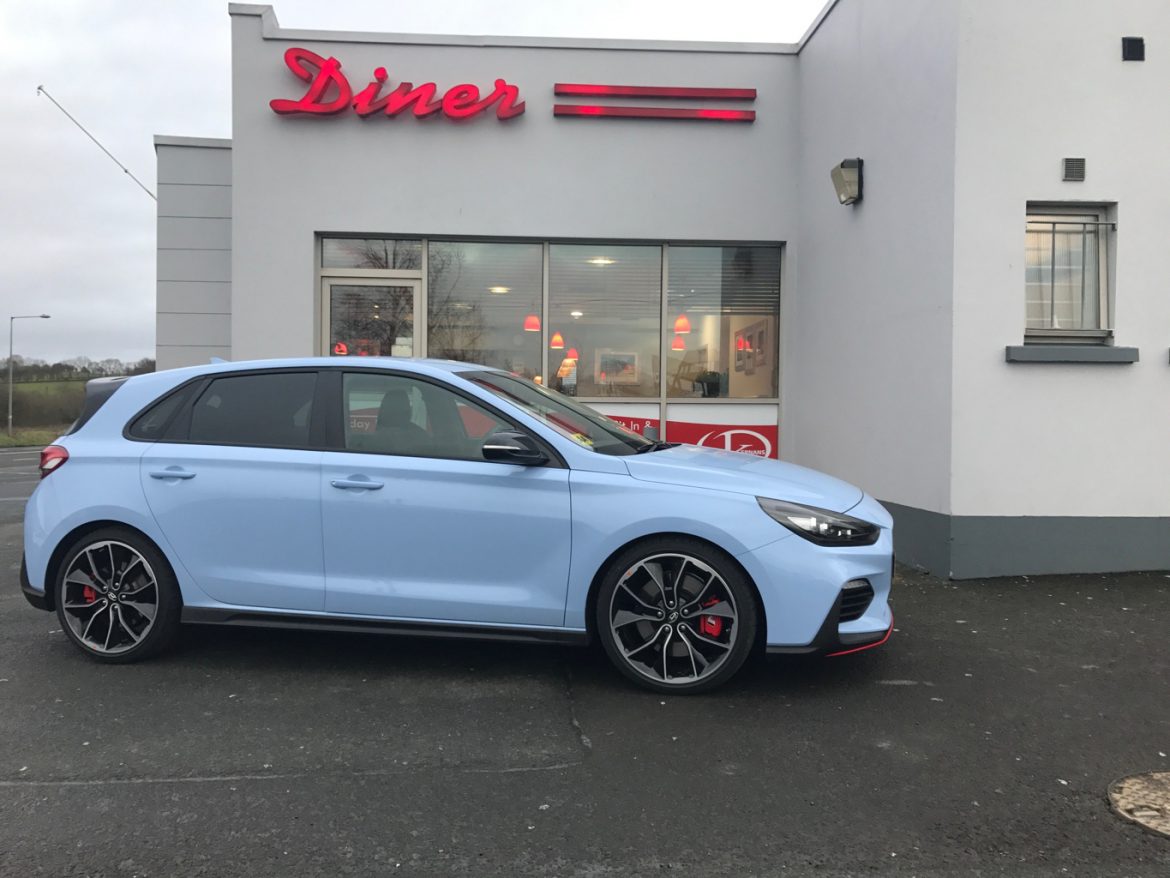 Every so often a car manufacturer turns out a car like this.

The Hyundai i30N is based on one of the best sellers in the Hyundai range, the mid-model Hyundai’s i30 but that’s where the similarities end.

The car and this N range is due to be launched in the coming months to a selected number of Hyundai dealerships in Ireland and our Local Hyundai Dealer for Donegal, Terence Diver in Letterkenny is one of them.

We had a spin in one of the two i30Ns he has on show in Letterkenny, ours was in a very bold blue which shows off the sporting stance on this very hot hatch right away.

This car has everything which can be adjusted by the driver to suit their needs from Engine setting to take the best from the amazing 247 bhp power plant to suspension setting down to even setting the sound of the exhaust. 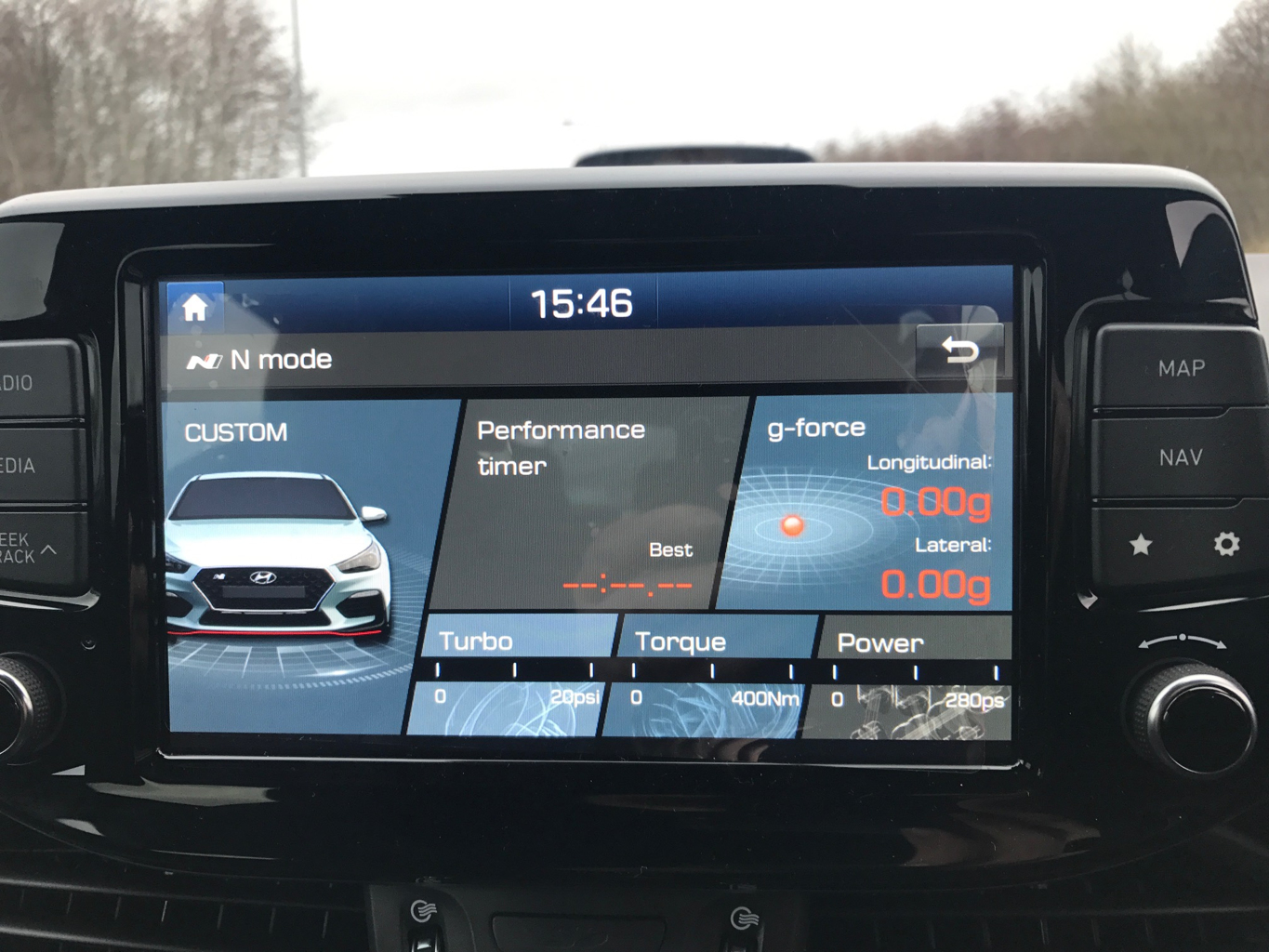 The i-30N is named after the racetrack where the tuning was developed at the Nurburgring Ring in Germany and also after the Namyang development centre in Korea and it’s only when you sit behind the wheel of this roasting hot hatchback that you appreciate how well they have developed this car.

There is so much happening under the bonnet of this car when you put the foot down but the difference in this hot hatch and the more familiar hot hatches is that the Hyundai i30N gives that raw power feeling back to the driver.

There seems to very little turbo lag and the car feels more live a normally aspirated engine. This powerful 2.0 power plant will rev to the cows come home. 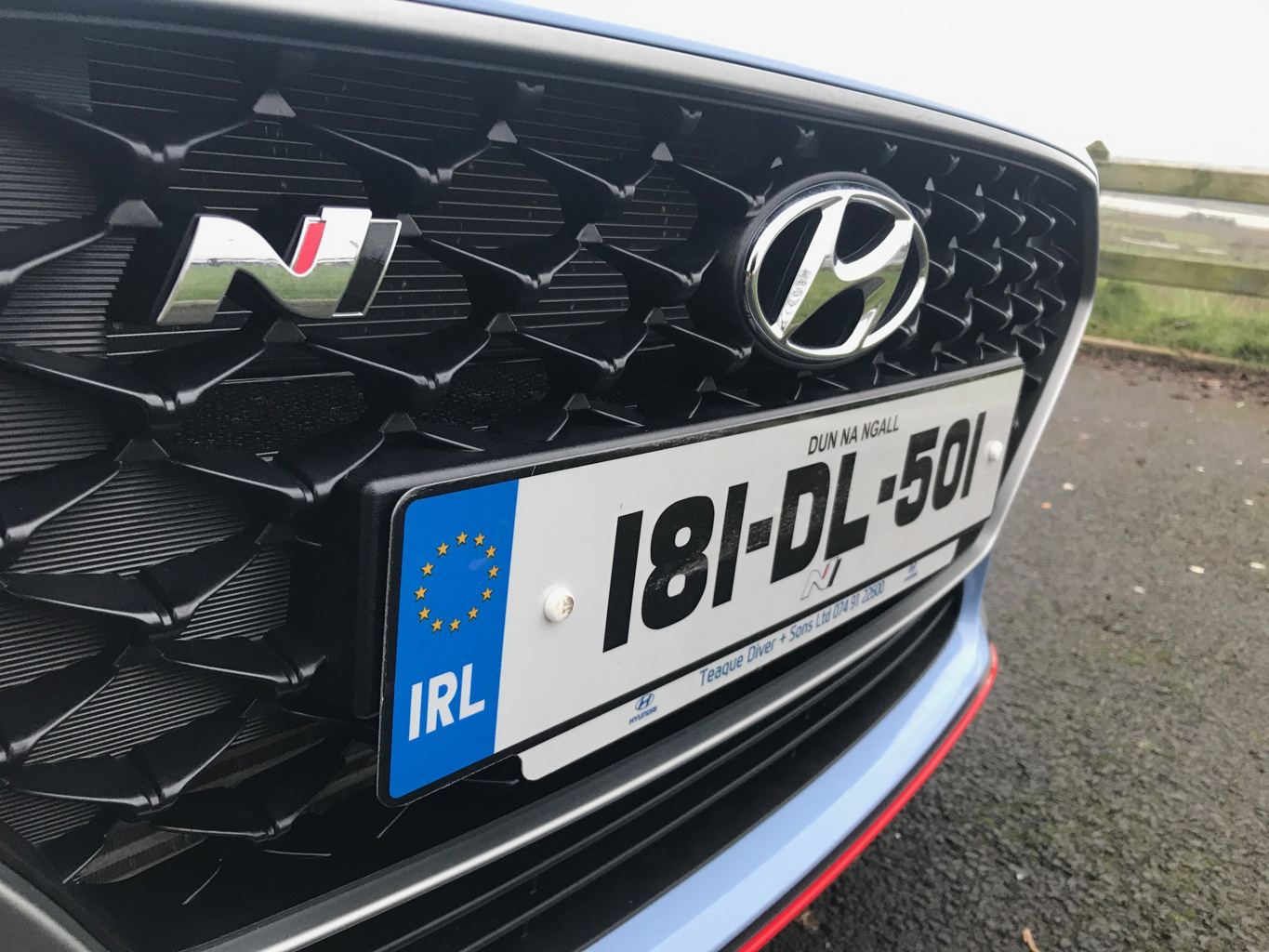 It will hit the national road speed limit early in 2nd gear and yet it will pull away 6th gear from the lowest of speeds.

That sound
It has to heard to be believed the sweet raw note of the twin exhausts when the car is pushed and Hyundai have even it programmed to backfire between gear changes. The car is amazing on the road the seats are just class with perfect support if you want to push the car on. This car is about fun and it even has launch control on it, something you are more likely to see on a F1 racetrack.

The brakes look amazing with the big N developed callipers at every corner of the car and they work so well to take this powerful car to a stop very quickly. 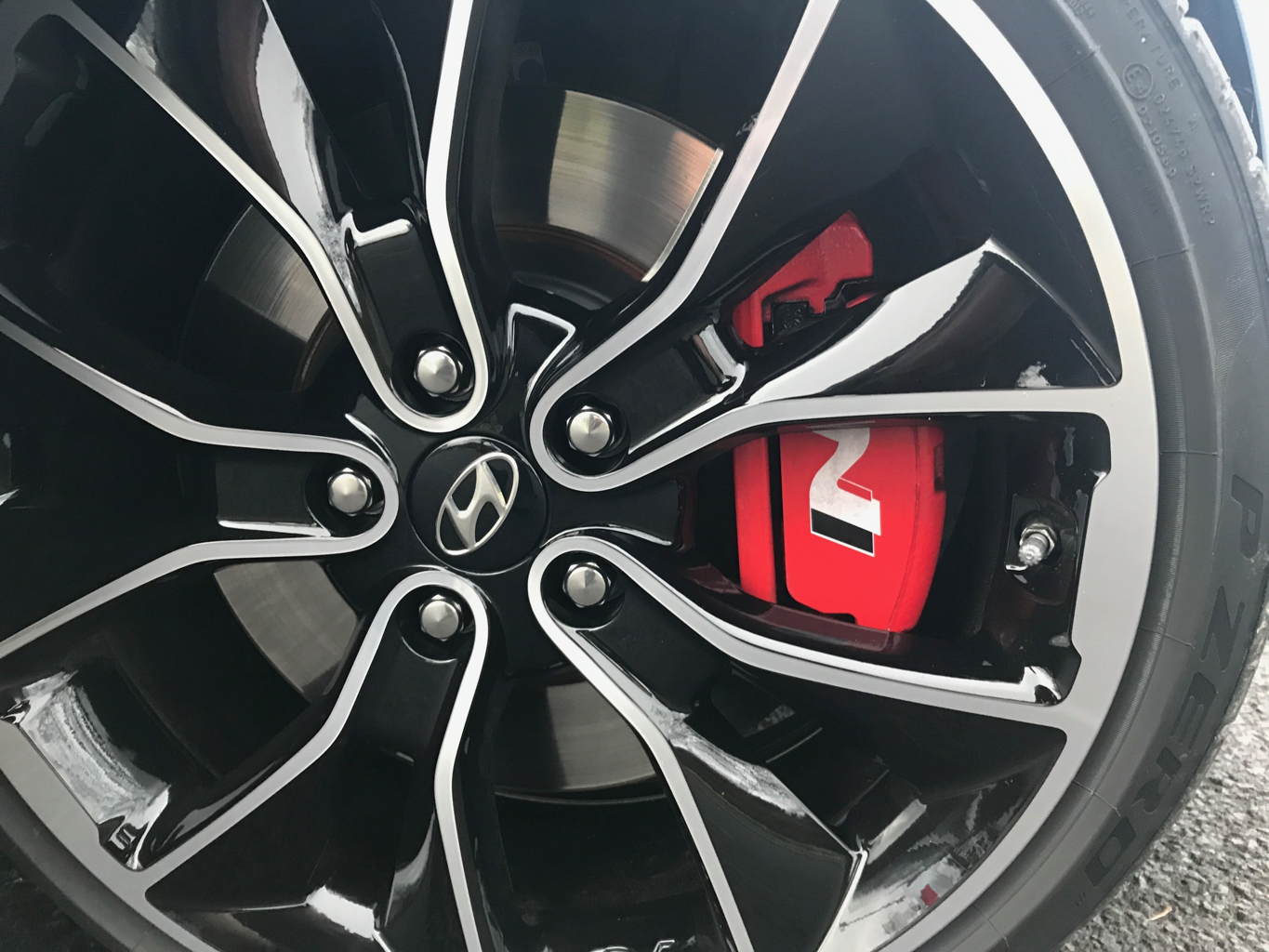 Amazing brakes on the new Hyundai i30N which were drove they week. Photo Brian McDaid

The Hyundai i30N is a direct competitor for the Golf GTI and the Focus RS, two cars that I think are amazing but think this newcomer could be having a look at the crown in this sector.

I look forward to the official launch of this car later this year but in the meantime take a run in and see the car for yourself at Terence Diver’s Hyundai in Letterkenny.

Day dreaming to nightmare
The first good car that I owned was a Ford Escort 1.6 Ghia Mk2. I fell in love with this car nearly a decade before I managed to buy it. I seen it arriving brand new to Hegarty’s Auto Services in Ballymacool one Sunday morning in the 70s on the back of Casey’s car transporter. I was a student at the tech and working in the petrol pumps in the evenings at the time and every so often we would be asked to de-wax these new cars.

I was given this brand new white Escort Ghia to clean it up and get it ready for its new owner. The car was for the late Fr. Patrick Prendergast, possibly the first car he owned after his ordination. This car was both elegant and powerful with its 1600cc pinto engine, and the classic Ghia finish complete with a luxury interior finished off with a wooden dash! Nine years after the day I sat daydreaming as I was cleaning this car I finally got the chance to buy it. Even then it still had lost none of its appeal. 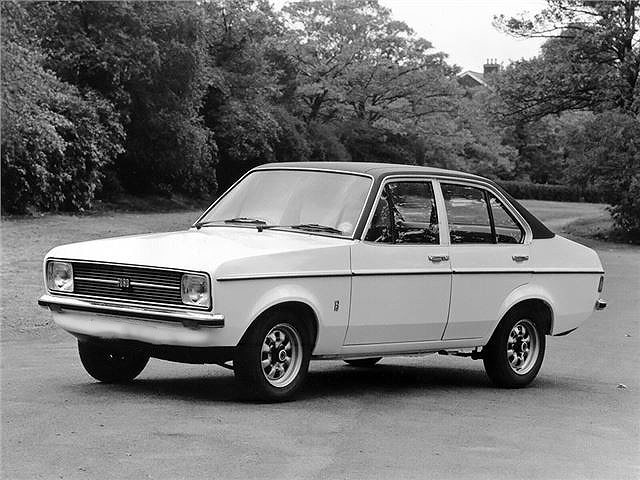 The Ford Escort Ghia Mk2 as I rememberit arriving new to Hegarty’s Garage in the seventies.

Now with my white Escort Ghia I am in the Creggan in Derry one evening when a massive bomb goes off in the city. It can be heard and felt for miles around. This was the era before mobile phones and the house phone was going steady as everyone in the family were ringing home to say they were safe. The Silk Cut Purple cigarettes are giving some comfort to the nerves as they wait on the last ones to call home. 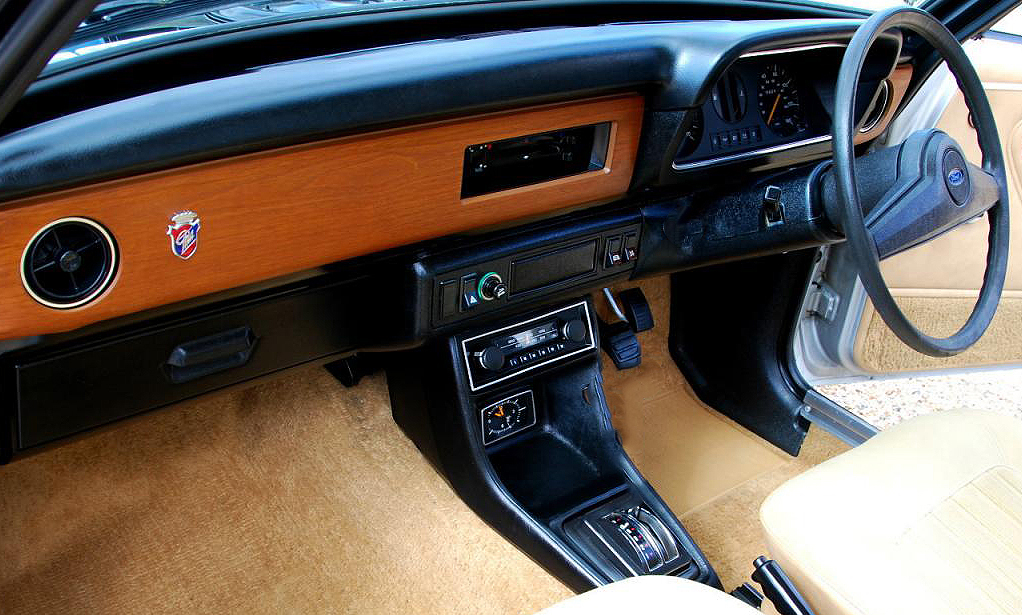 This stylish finish on the Escort Ghia complete with a wooden dash.

By this stage a massive British helicopter arrived in the night sky and sits high over the Brandywell Football pitch with massive powerful search lights taking the occasional sweep around the area. I was thinking about heading home but the house hold assures me that I’m mad. Nobody moves for a while after a bomb of this size goes off but sure how’s a boy from Letterkenny to know that.

The things that the British army were able to see through their hi-tech cameras even at night are recalled in the house in Creggan in an attempt to settle me down and make me stay where I am. This is having the opposite effect! I am even thinking my free state registered Ford Escort even though I have a Northern Ireland friendly “yellow rear plate” is going to be spotted sitting in the middle of the Creggan by this powerful camera on the helicopter and blown up in a controlled explosion.

Fr. Prendergast’s car was unlucky for me in Derry so far. A week before this I was stopped at the border army checkpoint and a British Soldier was sure he discovered drugs, it turned out it was a ball of “Gartan Clay” in the Glovebox that dried up into dust!

The helicopters sits for hours in the one spot every so often the wind direction would change and the sound would disappear. Then there was no sound at all. I was determined to get home that night but terrified at the same time. I’m visualising my journey down South-way, turn right on to the Lone Moore Rd. and then turn right again on the Letterkenny Rd and then face the Army Checkpoint on the way out to Killea.

Lourdes Water
A double blessing of Lourdes Holy Water, only for times like these is dispensed at the front door before I head on my way. That and a bit of good luck of Fr. Prendergast’s old Escort will all be needed tonight. The wind has died down and there’s not a sound as I head out of the Creggan.

I want to drive fast but think the better of it. Am I imagining it or do I hear a helicopter? The place is in darkness but there is a helicopter in the sky now and it’s deafening. I still can’t see it but I am waiting for it to come through the black vinyl roof of the car or open fire it sounds that near.

At the bottom of Southway I decided I have had enough so I stop the car get out and give myself up. I jump out of the car and put my hands on the roof of the car in a pure shaken state and keep my head down. When I looked up there was no helicopter to be seen, but the sound was still there, all of a sudden the sound of a helicopter was replaced by the sound of a piano! What is happening to me here?

By the time I hear the voice of Billy Joel singing I realised that I had mistaken his song on my radio, Goodnight Saigon for a British Helicopter in Derry.

I loved that song at the time and had a Pioneer Stereo with extra speakers fitted. That night when I got into the car I switched on the radio and when I heard nothing I probably turned it up to full volume. The intro of Goodnight Saigon has 20 seconds of silence before the sound of the helicopter is heard and it last for another 40 seconds before Billy Joel finally sings. 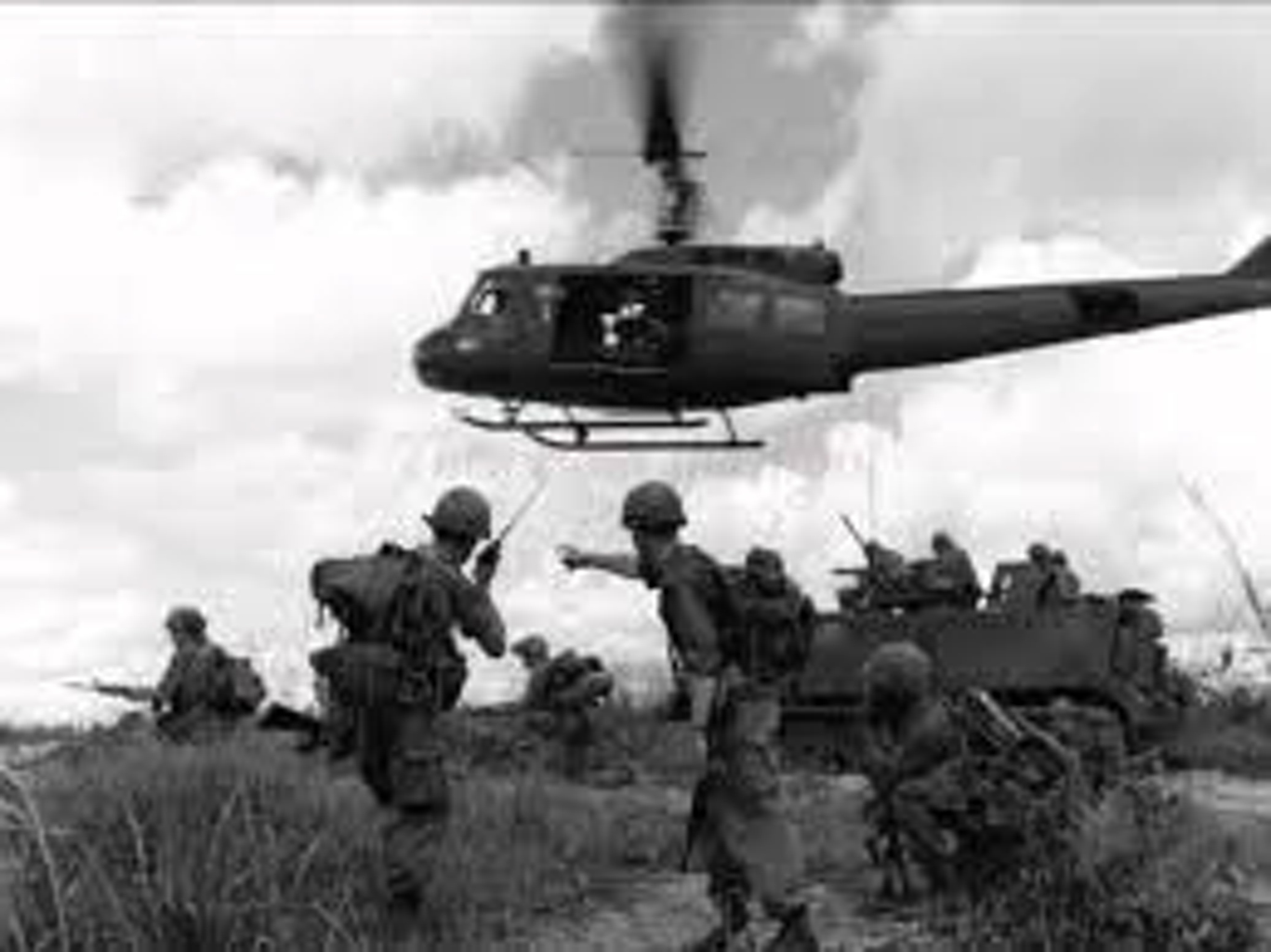 Memories of Helicopters in Derry which were one night mistaken for Goodnight Saigon.

By now I’m looking around me as my radio is blaring to see if anyone has seen me making a complete fool of myself.

I go from the arrest position with my hands on the roof to a stretched position my arms in the air, as if I am tired! Then I go around and give the front tyre a kick as you do and quietly get back into the car and get on my way back home to Donegal.