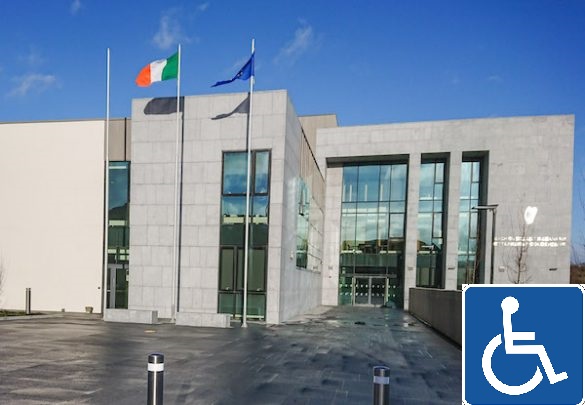 Local campaigners Frank Larkin and Michael MacGinty have been successful in their bid to secure wheelchair accessible parking at Letterkenny’s new courthouse.

The multi-million euro courthouse provides no parking for members of the public who will attend court, despite ample space being allocated for staff, Gardaí and judges.

Following the work of Accessible Letterkenny, spearheaded by Larkin and MacGinty, The Courts Service has announced that two wheelchair accessible parking bays will be provided near the main public entrance of the courthouse.

The new courthouse is located on the site of the old Letterkenny Leisure Centre on the High Road and has just recently hosted its first sitting earlier this month on the 2nd of January.

“Both these locations would require a wheelchair user or anyone with mobility issues to ascend or descend quite a slope. This would be pretty much impossible, even for our own intrepid campaigner Frank Larkin.

“This is a topic that will not go away until we see sufficient accessible parking and a culture where any such parking is not being abused.

“People with disabilities need to be included in all aspects of our society and included at the planning stage, rather than being an afterthought.”

Frank Larkin will now meet with Regional Manager Brendan McDonald to ensure that the spaces are allocated immediately.

“Accessible Letterkenny is just getting started, but this small campaign shows how the contribution of people with disabilities is important and can result in positive change.”