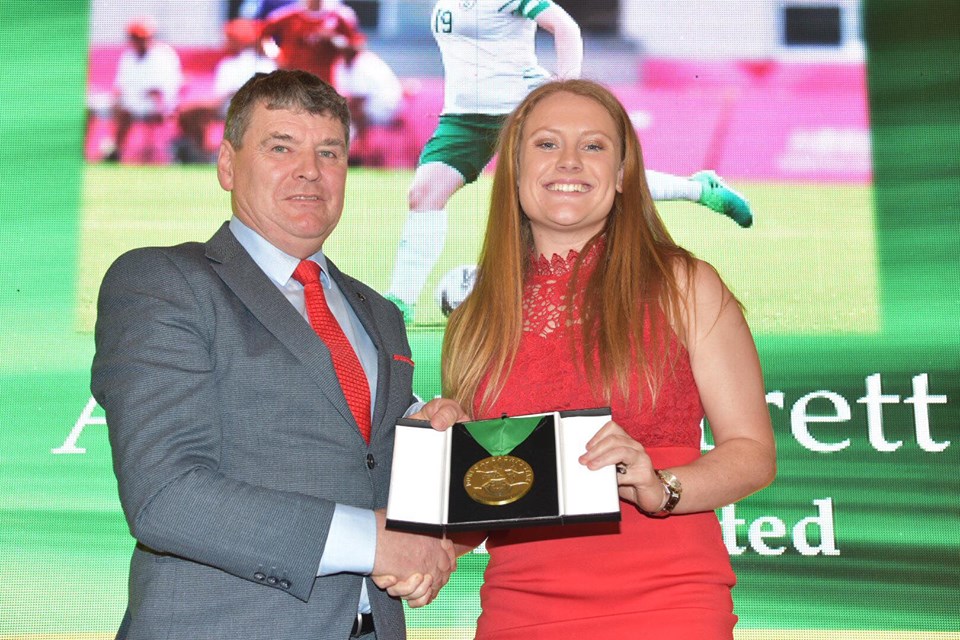 Listen: ‘I had to professionalise myself in the most amateur way” – Amber Barrett

There is a line from Amber Barrett that sticks out and perhaps sums up the Milford woman’s rise over the last year.

This time 12 months ago, Barrett was set to be a part of the Donegal senior ladies Gaelic football team, but by the year’s end, she had a barrow load of awards from playing in the Women’s National League and went on to make her Republic of Ireland senior debut.

“I had to professionalise myself in the most amateur way possible,” Barrett says.

“That came with commitment.

“When we played the Netherlands, one of the centre-backs is playing with Lyon. These are girls doing football sessions seven, eight, nine times a week…”

She was the WNL Player of the Year and the Top Goalscorer in 2017. The star turn with Peamount United, she was called into Colin Bell’s Irish squad and came on as a sub for the Girls in Green in a 2-0 win over Northern Ireland.

Barrett has retained her berth since.

She says: “Leaving the Donegal ladies panel was a very difficult decision to make. They will win an All-Ireland.

“To be in the University Games, then to play against the European champions and have the season I did with Peamount comforted me.”

Ireland have home games against Netherlands and Slovakia in April and Barrett is eager to get going again. She says: “We had a good season in 2017 with the senior. We have a few big games coming up and we really want to push on. I’m really looking forward to the challenges again.”

Listen: ‘I had to professionalise myself in the most amateur way” – Amber Barrett was last modified: January 27th, 2018 by Chris McNulty
Tags:
Amber BarrettMilfordPeamount UnitedRepublic of Ireland