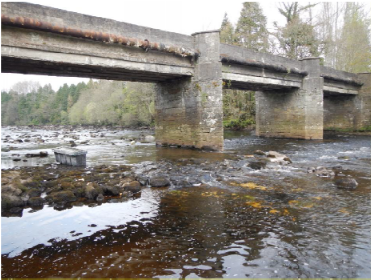 Local Councillor Patrick McGowan has raised concerns over the delay in upgrading Louge’s Bride in Ballybofey.

Located on the Glenfin road, upgrades to the 107-year-old bridge must now be put on hold until the route for the Ballybofey-Stranorlar bypass has been agreed.

In 2017, consultants were appointed to work on the bypass, and to look at all route options. One of the route options would be on the west side of the Twin Towns, near the present Louge’s Bridge.

Cllr McGowan tells Donegal Daily that local councillors were informed that if the bypass were to take the western route, then this would have a direct bearing on any plans for the bridge.

The Council’s Road Design Office has recommended stalling any further work on the bridge until the Ten-T bypass consultants have completed their work, which is due in the coming weeks.

Cllr McGowan comments: “We all realise and acknowledge the need to take everything into account while selecting a new route/location for Louge’s Bridge.

“The problem is Ballybofey and Stranorlar are at a standstill with traffic congestion at present and now local roadworks are being affected by a lack of progress on the bypass which is long overdue.

“Recent roadworks in and around Ballybofey Stranorlar has caused a lot of anger and frustration for both locals and passing traffic.”

A status report compiled by Donegal County Council’s Road Design Office in Lifford this week reveals that although no formal studies have yet taken place, initial investigations indicate that all six proposed routes for the bypass will be constrained by flooding or the presence of a special area of conservation. They will also be reaching out to local interest groups as part of any constraints study undertaken as part of the project.

The Council says that “there is good justification in bringing a project forward but… this will be a lengthy process and require [a] considerable amount of funding.”

The N15 at Ballybofey/Stranorlar is one of three major Donegal routes to be overhauled as part of the Trans-European Transport Network (TEN-T) upgrades: