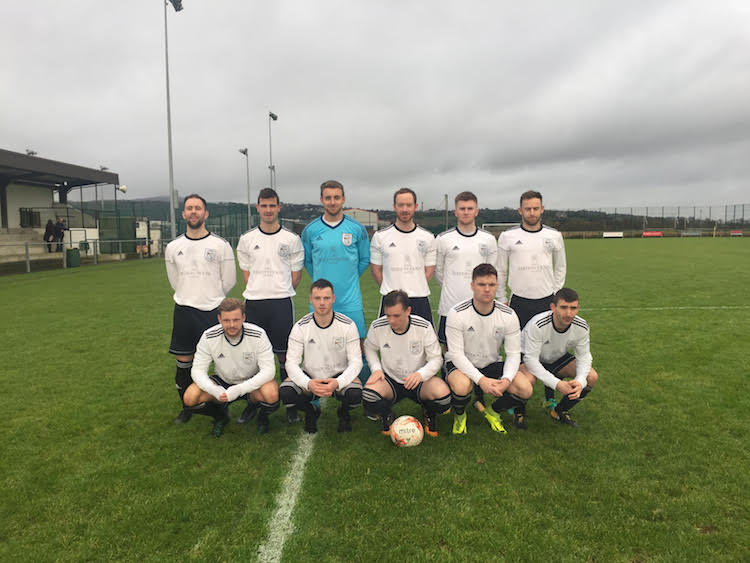 USL – Letterkenny, Derry narrow the margins at the summit

With Cockhill not playing today and with Fanad United held by Bonagee, Letterkenny Rovers and Derry City Reserves narrowed the gap to the leaders of the Four Lanterns Ulster Senior League.

Letterkenny Rovers narrowed the gap at the top of the Ulster Senior League and moved to within a point of the leaders as a patient and disciplined performance saw them defeat a well organised Finn Harps Reserves 4-1 in extremely awkward windy overhead conditions at the Aura Centre on Sunday afternoon.

This was the Cathedral Towns men first competitive game in eight weeks but it was ideal preparation ahead of a trip to Dublin next weekend in the last 16 of the  FAI Intermediate Cup.

There was nothing to report in the opening exchanges with chances at a premium as both sides tried to come to terms with the swirling wind with Stephen Doherty for Harps and Pajo Rafferty both forcing routine saves from respective netminders Jamie Bell and Rory Kelly.

Harps were beginning to gain some momentum and Niall McGinley shot just wide while Daragh Ellison blazed a free kick just over while Rovers had a gilt edged chance to go ahead on 32 minutes but some profligate finishing saw the chance spurned by a combination of Rafferty and Kevin McGrath.

Rovers began to build up a head of steam at this stage with the lively and returning Paul McVeigh causing headaches for the Harps central defensive duo of Ciaran Kelly and Paul Ferry while Lee Toland came close but it was Rovers who secured the lead on 37 minutes.

The goal arrived when McGrath took up possession before he cut the Harps rearguard wide open and his defence splitting pass sent Chris Flanagan away and his cross was slammed home to the roof of the net by Rafferty.

Harps came close to levelling before the break and Dylan McCroary saw his goalbound shot blocked by his own player Adam Duffy and the danger was averted.

The opening exchanges in the second half followed a similar vein to the first period and chances were minimal until Harps restored parity with one of the moves of the game which saw Stephen Doherty fire home after some neat interplay with Niall McGinley.

That really shook the hosts up and they went in front on 65 minutes when a teasing free kick from Lee Toland saw Conor Tourish rise highest and he had the simple task of heading past Bell.

McVeigh and McGrath both saw chances saved and cleared to safety before the combination of Toland and Tourish linked up again with Tourish heading high to the net on 78 minutes to end the game as a contest.

Rovers then added the coup de grace in stoppage time when Darren McElwaine hammered home a superb effort after a teasing cross from the highly impressive Toland.

Harps fielded mainly 19s and boss Joe Boyle can be reasonably  confident that his side will do well in the upcoming Airtrcity underage league based on this performance as his side were decent for long patches.

Rovers will travel to Dublin next week in good stead having worked hard and deserved a solid victory.

After a bright opening from both teams, Derry went ahead on 30 minutes from a great pass from Sean McBride who sent Adrian Delap clear on goal and he finished well.

After that Swilly had two great opportunities to equalise, but one hit the post and the other was a great save by the Derry keeper.

Derry really took the game to Swilly in the second half but Swilly looked a threat on the break.

Sean McBride got on the end of a cross from Delap to make it three.

McBride scored the fourth himself with a great solo effort and McClure got his second of the day and Derry’s fifth late on.