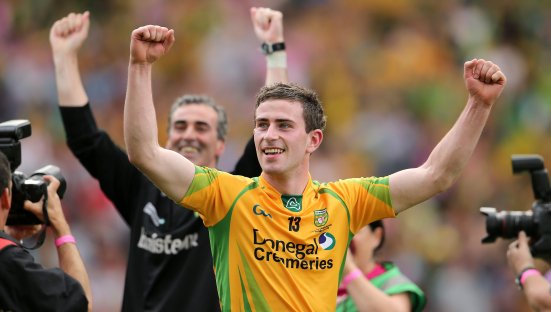 Patrick McBrearty stepped up to the plate for Donegal yesterday, booming over 10 points against Kerry.

Even though Donegal lose to a pair of late Kerry scores, McBrearty was the Man of the Match.

The Kilcar ace hit six points in the first half and ten in total, again outlining his worth as one of the top forward’s in the game.

One long-range free showed his prowess from the deadball and in first half injury time, McBrearty chalked up a majestic score. Fetching a kick-out from Peter Boyle around the half-way mark, McBrearty delightfully galloped forward before stroking over off his left foot from 25 metres.

What a talent! Paddy McBrearty can do it all! pic.twitter.com/CfFEgi2Rm8

Another thing about today’s game, Odhran went full beast mode after Mullins got sent off. Imagine him Murphy and Footballer of the Year Patrick McBrearty on the one team???

Paddy McBrearty has to be one of the top 5 forwards in the country. #Donegal

Paddy McBrearty just leaving two Kerry men on their holes within 5 seconds of each other, nice

As a Kerry fan, delighted to get out of there with a win but my god Patrick McBrearty was unreal, great individual performance!! #ClassAct #AllianzLeagues

Paddy McBrearty is different gravy. What a player. #GAA

Paddy McBrearty, what a footballer 💛💚

Paddy McBrearty is an outstanding forward. The free he kicked from the 65 outside of the boot was a thing of beauty. Macniallais was unreal in the air. All in all I think the two teams will be happy. Donegal will be a tad disappointed not to get something.