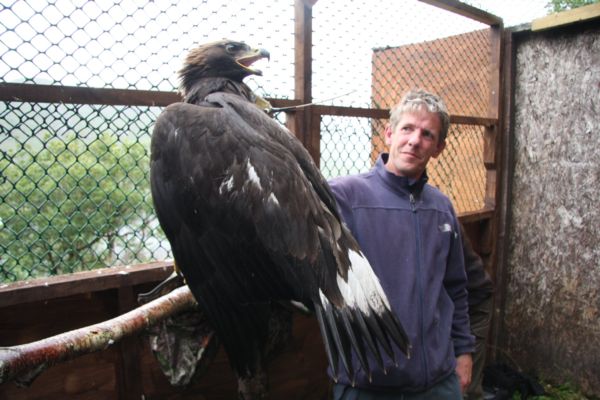 The Donegal Golden Eagle Project has reached a huge milestone with the news that an Irish-bred golden eagle hatched and reared a chick in the wild last year.

Three separate pairs each hatched a chick, according to the Irish Raptor Study Group’s (IRSG) 2017 review of birds of prey in Ireland.

The eagles all fledged in Glenveagh National Park.

This is the first time in more than a century that an Irish-bred golden eagle has given birth to a chick here.

The species disappeared from Ireland in 1912 but has been reintroduced in the park since 2001 from Scotland.

The chicks that hatched last year were the first-born in Ireland from the Scottish eagles.

Golden Eagle pairs can now be found in the Derryveagh and Bluestack Mountains and the Glencolumbkille and Inishowen Peninsulas.

Whilst this fragile population is still confined to County Donegal; the addition of three healthy juveniles to a small population total of 20-25 birds, is a very welcome boost.

Lorcan O’Toole, of the Golden Eagle Trust, wrote in the IRSG review that if the birds could fledge at the same rate there would be a slow improvement in the wild numbers.

In the review, Mr O’Toole wrote “We know that wild bred young Eagles tend to be more productive than released or reintroduced eagles (See analysis or comparisons between the productivity of reared and released White-tailed Eagles in Scotland).

“So, in several years-time, if we can see the Irish population fledge 3-4 young Golden Eagles a year, consistently; we may anticipate a slow upturn in the small Irish population, trying to take root in the Northwest.”