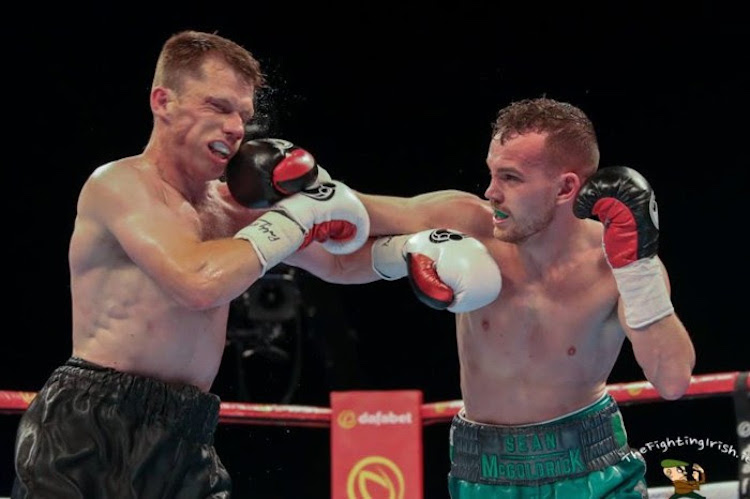 Sean McGoldrick itching to return to action after six-month break

Former Commonwealth Games gold medallist Sean McGoldrick believes he has the perfect opportunity to shake off his ring rust this weekend as the Welsh bantamweight aims to kick-start a big year in the paid ranks.

Newport native McGoldrick (3-0, 1KO), whose father, Liam, is from Ballyshannon, is set to take on Ghana’s Michael Barnor on the undercard of the Matchroom-promoted cruiserweight clash between his MTK Global stablemate Isaac Chamberlain and Rio Olympian Lawrence Okolie at London’s O2 Arena on Saturday night.

The six-rounder will mark the 26-year-old’s return to the ring after a six-month break, having recorded his first stoppage victory over Hungarian Gyula Dodu last July.

“There was no real reason why I was out, it was just the way things fell,” said McGoldrick.

“I’m happy to be fighting on Saturday though and I’m looking forward to a busy 12 months. Being on such a massive card is great and hopefully I’ll box well to match the occasion.

“I want to get some more ring time and build my experience. That’s what it’s all about. I’m heading into my fourth fight now, so I’m looking forward to getting some rounds in and I’ll start pushing on more towards the end of the year.

“I want to look good and show improvements in every fight. I trust my trainers and my management, MTK, that they’re going to do whatever’s right for me.

“If they think I’m ready for a Welsh title shot or a British title sometime this year then that’s what I’ll go for, but I’ll just take it fight by fight,” added McGoldrick, who trains alongside the Selby brothers – IBF world featherweight champion Lee and former amateur team-mate Andrew – at St Joseph’s gym under Tony Borg.

And the ex-Team GB star hopes the talented Newport stable will soon lead a Welsh revival.

“If everything goes to plan then hopefully we can bring regular big-time boxing back to Wales,” said McGoldrick.

“The next big bill is obviously the Anthony Joshua [v Joseph Parker] card and it would be amazing to be on it, so hopefully that might work out too.

“But I’m just focusing on Saturday night and we’ll see what comes after that. I’ll push on after I get the win this weekend.”

The rugged Ghanaian journeyman (14-19-3, 10KOs) has went the distance in all 12 of his bouts to have taken place in Britain and Ireland and McGoldrick predicts that his opponent will give him a welcome workout.

“He’s quite game. He’s been over to the UK a few times and he hasn’t got stopped over here, so I know he’s tough and he’ll come and have a go,” said the Welshman. “I need to be sharp, I can’t make any mistakes and I need to produce a good performance.”