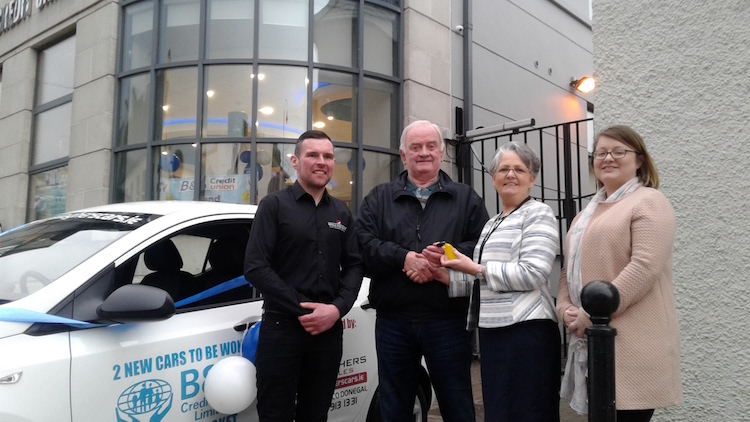 Paddy McGlynn, from Kilrawn, Cloghan, was the very popular winner of a brand new Hyundai i10 in the first B&S Credit Union Members Draw of 2018.

The first of two draws took place on Tuesday) at the B&S Ballybofey branch – the second will be held in July.
A retired farmer, the affable Paddy (77) said he was relaxing at his home in the Glenfin Gaeltacht and almost ‘fell off the chair’ when he got a telephone call from Ms Pauline Tourish, manager of B&S Credit Union.
“Oh, I got some shock when Pauline told me the good news,” he said.
“I was sitting down relaxing and nearly fell off the chair when I heard I had won a new car.
“I’d actually forgotten that I’d even entered the draw, but it was a wonderful surprise. It’s a lovely car and thanks to everyone at B&S Credit Union, they are really a great asset to the local community.”
A driver of a ten-year-old jeep, he says he has yet to decide what to do with his new motor.
There were also €5,250 in cash prizes and another €750 in spot prizes and vouchers for local businesses for those who attended on the day.
Winners of €1,000 each were, Sean Tourish, Crossroads, Killygordon, Kieran Temple, Ard McCool, Stranorlar and Anne Marie Kelly, Cross, Killygordon. Those who snapped up €500 each were Peggy Galvin, Alysia Nunez and Bernadette Callaghan, all from Ballybofey.
Paddy is popular winner of new car in B&S Credit Union draw was last modified: February 1st, 2018 by Chris McNulty