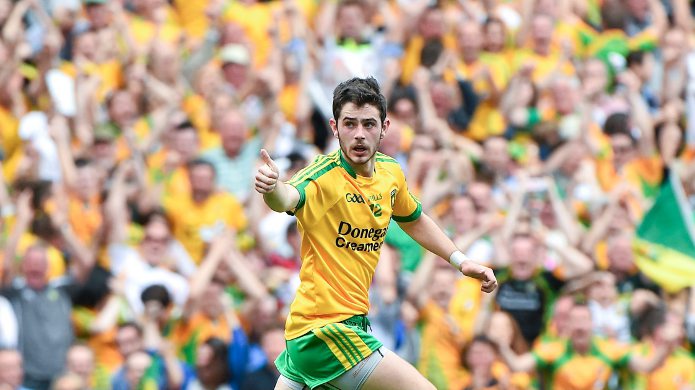 Watch: “It’s what I always wanted to do” – Ryan McHugh on his pride in Kilcar and Donegal

Donegal ace Ryan McHugh has been featured in eir Sport’s ‘My Tribe’ series for their Allianz League coverage.

Next Saturday night, eir will broadcast live coverage of Donegal’s clash with Donegal at Croke Park.

Donegal have to face Galway on Sunday before making the trip to the capital, however.

McHugh, an All-Star winner in 2016, is from the famous McHugh dynasty in Kilcar.

“It’s a real community,” he says of his home village.

“As a youngster growing up, it’s what I always wanted to do. I watched my father my uncle my brother playing Gaelic football. The first day I put on the Donegal jersey was a huge day for me.”

The clip also features family members and Declan, his boss.

Watch the full clip below …

WATCH:
"As a youngster growing up, it was what I always wanted to do" – Playing for Donegal was the only option for Ryan McHugh.@DubGAAOfficial v @OfficialDonegal in the #AllianzLeagues is LIVE next Saturday on eir sport. #MatchNightLive pic.twitter.com/OugIiVVnFE

Watch: “It’s what I always wanted to do” – Ryan McHugh on his pride in Kilcar and Donegal was last modified: February 2nd, 2018 by Chris McNulty