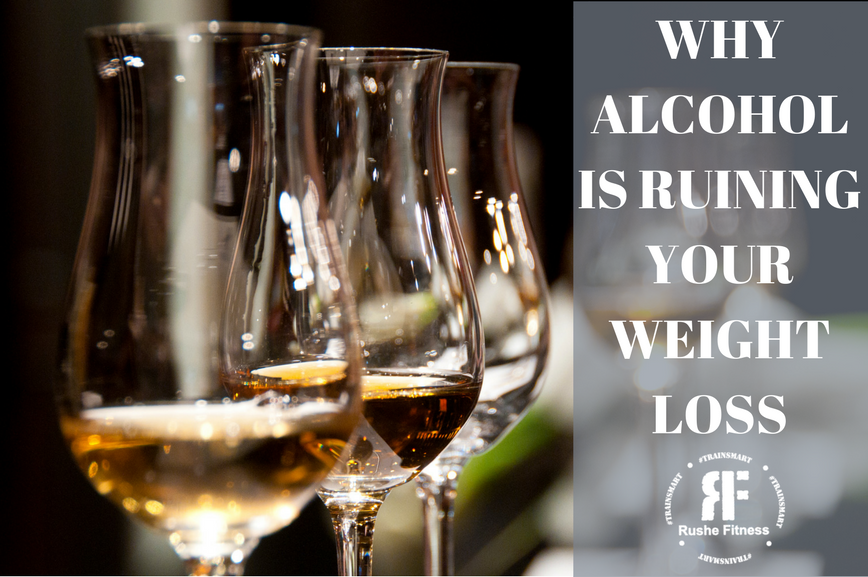 DD Fitness: Why alcohol is ruining your weight loss

It’s February, and that can only mean one thing. Dry January is over.

But let’s face it, for some of you, dry January was over the 2nd weekend of the year. You can be offended by that all you want, but you know it’s true. Alcohol is one of the main culprits as to why you struggle with weight loss. In your head, you don’t drink a lot. The reality is; you do.

By a lot, I’m not talking about frequent binges, I’m more talking to those of you who ‘only’ have a glass of wine each night, or an ‘odd’ bottle of beer at the end of a hard day’s work. Sure, you have to live, and they won’t do that much damage… Here’s the thing! Alcohol has calories in it, and they all count towards your daily and weekly totals.

So if you are consuming it on a regular basis, the chances are you will struggle with weight loss.

When it comes to calorie intake, drinking a glass or 2 each night is no different to drinking only at the weekends.

If your goal is weight loss and you feel that you are ‘being good’ and ‘eating healthy’ during the week, a weekends drinking could mess it up on you.

Let’s take a weekend, ‘on the lash’ as an example.

A 330ml bottle of beer has 142 calories, if you drink pints that number increases to 244 calories.

So, if we take that the start of the night for most will be around 5-6 bottles or pints before hitting the nightclub, you will have already hit 852 calories for the bottle drinkers and 1464 calories for the drinker of pints.

You hit the nightclub and it’s party time.

You move onto spirits.

Vodka has 95 calories per half and just like Pringles, you can’t only have one, so let’s average it out to 4. Of course, because we’re watching our weight, we will mix it with diet coke. 4 x vodkas + diet coke = 384 calories

This isn’t even allowing for mixers like Redbull, full sugar mixers like coke, the ‘it wouldn’t be a party without shots, or a trip to the takeaway at the end of the night.’ By the way, if you mixed the shorts with Redbull, the total would be 608 calories instead of 384 calories.

Add in a takeaway at the end that would add on around 838 calories.

This is one night, one night with a possible higher end total of between 2298 and 2910 calories.

If you regularly do 2 nights like this, just double those figures.

If you ‘only’ have a glass of wine each evening and then maybe 1-2 bottles at the weekend, you would be along the same lines, it’s just spread out more throughout the week.

4 bottles of red wine, which would be 1 liberal drink each night and 2 bottles at the weekend have 2256 calories. (source drinkaware.ie)

So, you would be taking in much the same as one night out for the weekend warrior.

This isn’t allowing for the cheese and crackers you ate with the wine, or for the breakfast that the weekend warrior ate the following morning to take away the taste of alcohol and that kebab they think they ate.

What you also need to know is that a lot of the calories in alcohol are ‘empty calories’ they are virtually useless to the body, so when you drink alcohol fat burning slows down considerably, until the alcohol calories are burned off, so you have more of a chance that you could be storing fat.

As I have said before, weight loss comes down to calories in versus calories out. If you are in a moderate calorie deficit all week, say 300 calories each day, and then you are drinking regularly or drinking all weekend, it is going to have an effect.

If you are drinking an extra 2500-3000 calories each week, you will not lose weight.

Now you know this, STOP COMPLAINING THAT YOU CAN’T LOSE WEIGHT!

You might be dieting like a model on fashion week, but if you are drinking like an Irishman on Paddy’s day on top of this, you are going to be either ruining your chances of weight loss, or severely hampering them.

Calories count, it doesn’t matter how you try and get around it, you can’t beat this.

If you currently struggle with your weight, you may need to either reduce or eliminate alcohol from your diet.