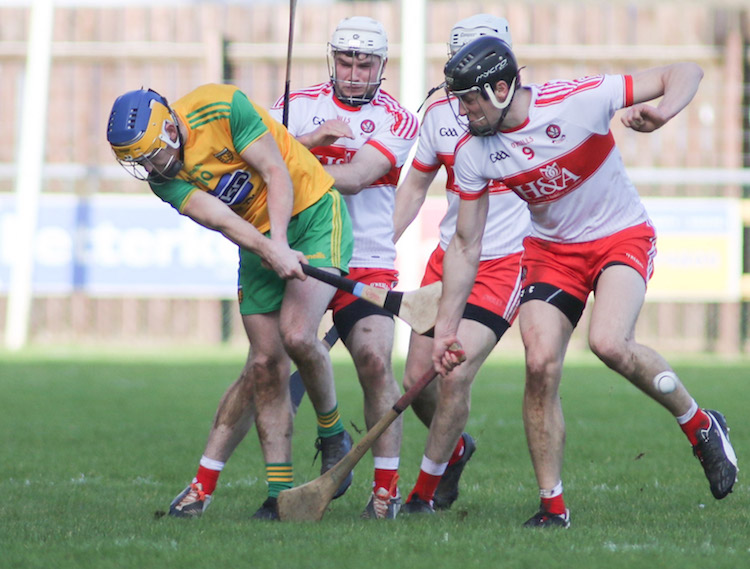 Donegal hurlers hit four goals as Mickey McCann’s team recorded an impressive win over Derry in Letterkenny for their first ever win in Division 2B.

The game was in the balance after McDermott cancelled out Alan Grant’s major for Derry but when Coulter tucked home in the 47th minute, it was Donegal’s day.

McDermott’s delightful cross-field pass opened the possibilities for Lafferty in the 51st minute and a cracking finish gave the Derry goalkeeper, Michael Kirkpatrick no chance.

Lafferty’s goal put Donegal ten in front and a free from half-way by Lee Henderson – who hit six points in total – was a showing off Tir Chonaill’s confidence.

There was still time for a fourth goal as Flynn wonderfully surged in across the endline before powering home with an expert finish.

Derry might have been missing their Slaughtneil contingent but, nevertheless, it was still a fine way for Donegal to get off the mark with a win in Division 2B.

An eighth minute goal by Alan Grant had Derry 1-1 to 0-2 in front early on, but Donegal hit back with Gerard Gilmore, Lee Henderson and Bernard Lafferty on the mark to take the driving seat.

Donegal were handed a glorious chance to extend the advantage on 15 minutes when captain Danny Cullen, after a stylish solo, was chopped down by Colm Murphy. Kevin Brady, the referee, had little choice but to outstretch his arms for a penalty.

Davin Flynn stepped forth, but the connection wasn’t how he’d have wished and the Tipperary native fired wide of the target.

Four minutes later the home side found the back of the net. Flynn was the architect in the move and McDermott made no mistake with a cool finish across Kirkpatrick.

Cullen tackled on a point and Donegal were beginning to purr.

Donegal had won promotion from Division 3A last year after a final win over Tyrone and new boss Mickey McCann was seeking a response following a heavy 2-16 to 1-9 loss in Mayo seven days ago.

With Paul Cleary and Grant on the mark, the Oak Leaf were creeping back, but Henderson steadied the wobbles with a well-taken score.

Coulter was denied a second Donegal goal late in the half by a point-blank save from Kirkpatrick but, in spite of eight wides in the opening period, the hosts led 1-8 to 1-5 at the short whistle.

McDermott, Henderson and Mathewson added to the Donegal total and Coulter got in behind for a second goal that broke Derry’s hopes of staying in touch.

Lafferty and Flynn raised green flags for the rampant Donegal, who will surely grow in confidence from this win.

Donegal hurlers hit for goals in historic Division 2B win over Derry was last modified: February 4th, 2018 by Chris McNulty