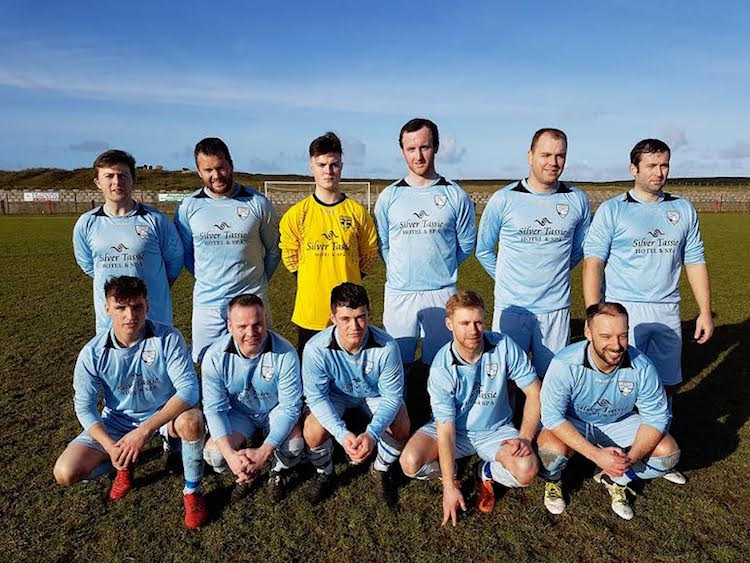 Fanad United moved top of the Ulster Senior League after a comfortable 7-0 victory over Swilly Rovers on Sunday.

The game was switched to Traigh-a-Loch and was played in ideal conditions.

Fanad were quick out of the blocks and took the lead after 3 minutes. Jordan Toland played a defence splitting pass through to Davitt Walsh who scored at the near post.

On 20 minutes Caolan Kelly almost scored a spectacular overhead kick form the edge of the box but the ball went wide of the post.

Fanad, though, doubled their lead a minute later when Shaun McElwaine flicked on a Marty McAteer corner and Davitt Walsh was on hand to head home from close range.

Swilly were unlucky not get a goal back on the half hour mark when Shaun Crossan saw his free from 20 yards drift just wide. With two minutes of the half remaining, Matthew Crossan played a one two with Tony McNamee on the edge of the box but his shot was well blocked by Jamie Lee Blaney in the Swilly nets.

On the stroke of half time Caolan Kelly got his second and Fanad’s fourth when he slotted home after some excellent set up play by Tony McNamee. 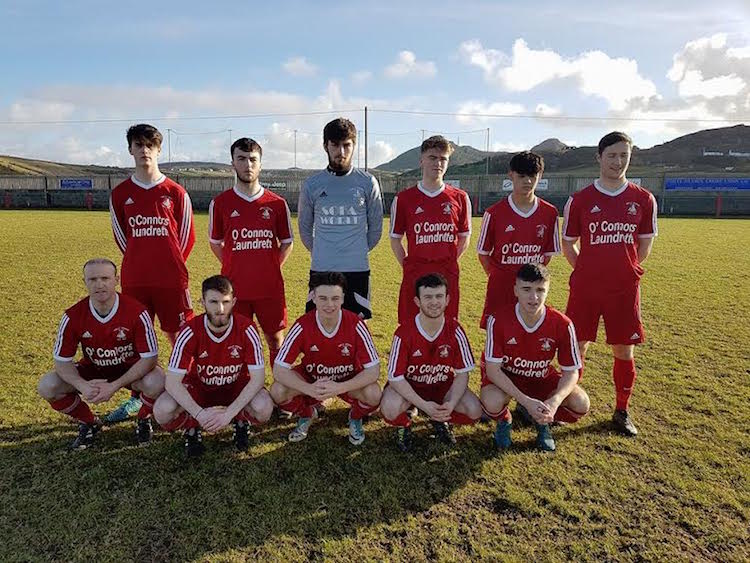 Fanad continued to press and got their fifth just before the hour mark. Sub James Kerr bust into the box and his pull back was met by Davitt Walsh to complete his hat-rick from five yards out. Tony McNamee was unlucky in the 65th minute to see his shot from 25 yards fly just over the bar.

However, Fanad did add a sixth just two minutes later. Paul Bradley went on a run down the left and when he found himself in space in the box he fired home from a tight angle.

The last goal of the game came with 5 minutes remaining when Tony McNamee headed home a Marty McAteer corner. The win moves Fanad three points clear at the top of the table but Cockhill Celtic have two games less played.

A youthful Finn Harps Reserves travelled to Dry Arch Park and managed to score a late winner in the spring sunshine to leave Bonagee lamenting over the missed first half chances that could have seen them well ahead at the break.

An impeccable minutes silence was observed by all in the ground for former player, Michael McGrath, who lost his battle to illness this week.

Harps did create the first real chance when ex-Bonagee man Dylan McCroary zipped a ball across the face of the Bonagee goal and it was narrowly missed by the in-rushing Adam Duffy.

On thirteen minutes, the home team a great opportunity to break the deadlock.  Matty Harkin’s neat pass left Kevin Barr with only the keeper to beat, but he managed to somehow blast the ball over the bar.

In the 16th minute, the same two players were involved, this time Harkin latched onto a Barr pass and hit his effort straight at the Harps keeper.

Ex-Finn Harps player Micheál Doherty was next to miss, this time he shot his right footed effort at the keeper, when probably shooting with his left foot was a better option.

Duffy continued to cause the Bonagee defence problems with his pace, and he could have made it 1-0 in the 40th minute when his shot from 20 yards just went wide of the post.

The second half began with Harps on the front foot, and they took the lead in the 48th minute.  Duffy twisted and turned inside the area, and somehow managed to squeeze a shot in off the far post.

Bonagee drew level in the 67th minute, when the unfortunate Harps goalkeeper, Joe Boyle, hit his clearance off Matty Harkin, and it managee to roll over the line to make it 1-1.

Harps regained the lead three minutes later.  McCroary hit an effort from 10 yards past the outstretched arm of Paddy Quigley.

The home side drew level again in the 75th minute.  Good play by Doherty on the byline, and his cross with sidefooted home by Harkin to make it 2-2.

The winner arrived with seven minutes remaining on the clock, when McCroary  again was involved, his cross was headed home by substitute Jamie Browne.