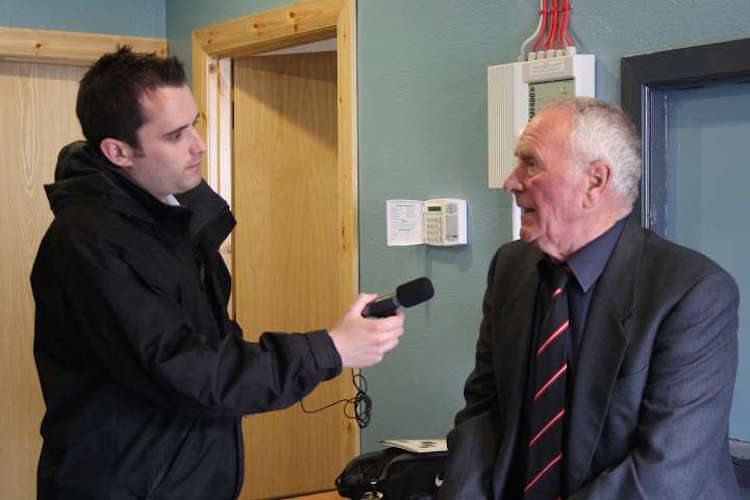 60 years ago today, on February 6, 1958, a plane carrying the Manchester United team, supporters and journalist, crashed at Munich-Riem airport. There were 23 fatalities. On the anniversary of the Munich Air Disaster, we re-run this interview with goalkeeper Harry Gregg, who was one of the 21 survivors…

Little did Harry Gregg think that when he played in the Ramelton Cup in the early 1950s that he would go on to become one of the greatest goalkeepers in the game.

Gregg is now 85, but remains every bit the imposing figure he was during a memorable career – a career tinged with horrific tragedy.

Gregg signed for Doncaster Rovers in 1952 and in December 1957 Matt Busby paid £23,000 to take him to Manchester United.

Just a few weeks after signing at Old Trafford came a night that would shape the remainder of Gregg’s career.

It is night that has haunted him ever since February 6th 1958.

United led Red Star Belgrade 2-1 from the home leg of a European Cup quarter final. Gregg was heroic in a 3- 3 draw in Yugoslavia to send them into the semi finals.

Later that evening, Gregg would become a hero in a much different manner.

United’s plane stopped in Munich to re-fuel and two failed take-off attempts were made.

Passengers disembarked, but were recalled when it was decided to reject a plan to stay in Munich overnight.

British European Airways Flight 609 crashed on its third attempt to take off from a slush-covered runway at Munich-Riem Airport.

Gregg recalled the fear in the eyes of Roger Byrne as the plane made its doomed journey down the runway.

A house passed by, then a tree.

“There was a great hissing noise all around me and I realised that I was still alive,” Gregg said.

Gregg rarely talks about the events on the Munich runway and it was certainly an experience and an education to hear him speak so openly, so passionately and so emotionally.

Captain James Thain came and told Gregg to ‘run for it’ but Gregg rescued a child and her mother, before pulling the bodies of Bobby Charlton and Denis Viollet from the wreckage.

He found Busby in agony, and then was met by the horrific sight of Jackie Blanchflower, with Roger Byrne lying dead across his body.

“Sadly I was involved in the accident which destroyed United at the time,” said Gregg, a tear in his eye as he spoke of that awful night that claimed the lives of 23 people.

“It was sad for anyone. I lost a lot of colleagues, a lot of pressmen were lost – eight out of nine were lost – the secretary Walter Crickmer. People were lost and almost forgotten because the focus was on the players

“A man on that aircraft, a multimillionaire, Willie Satinoff, who was to become a director when he returned to Manchester. He was killed in the accident and you never hear his name.

“They talk of Harry Gregg, Bobby Charlton, Mark Jones, Kenny Morgan and Jackie Blanchflower, but there were others.”

Ten days after the crash, Duncan Edwards passed away in a German hospital.

“When I left Duncan I had no doubt he would be okay in my mind, my simple mind,” Gregg said.

In their first game back after the disaster, United beat Sheffield Wednesday 3-0 in an FA Cup game.

“If I had to sit in the house after that when I came back and had that playing back in my head, I think I’d have gone insane,” Gregg said.

“Football was a safety valve. I just wanted to get back to training, to fight, kick and scream like a trooper. Just to be involved in life. The first game was against Sheffield Wednes- day and I didn’t know players I was playing along with.

“We gelled and got through to the Cup final.”

In the Cup final of ‘58, Bolton won 2- 0 with Nat Lofthouse scoring twice. The second goal saw Lofthouse bundle Gregg over the line – it was one of the incidents that ultimately led to the ruling that prevents attackers from colliding with ‘keepers now.

Despite the great tragedy that he had to deal with, Gregg recalls his time at United with fondness.

“It wasn’t just that there were 12 of us, but in the club at that time were 42 players. Only four had been signed from the outside – Ray Wood, the England goalkeeper whose place I took, Johnny Berry who signed from Birmingham, Tommy Taylor who came from Barnsley and Harry Gregg from Windsor Avenue, Coleraine. That was a great credit to the Busby era.

“It was great to be part of United in anyway when you consider that some of the kids down in the B Team were the likes of Johnny Giles. You couldn’t

write it, it was a fairytale.”
He also knew tragedy off the field – his first wife died at 26 and he found life difficult after that. “I couldn’t come out and tell the public. I had two little girls. There were times and rea- sons that I didn’t play after that,” he said.

After leaving United in ‘67, he watched them win the European Cup the following year and he was asked back to United as a coach.

This, he says was the ‘finest compliment’ I was ever paid. He has managed Shrewsbury, Swansea, Crewe and Carlisle, while at international level he was voted goalkeeper of the tournament at the World Cup in 1958.

He’s played with some of the greatest players the world has ever seen, but classes Denis Violett as the best team-mate he had.

“He was a genius and the reason he had to leave Manchester United was the greatness of Sir Matt Busby.

“At 26, Denis was Jack the Lad off the pitch. He was a great player and the bossman loved him, but at Old Trafford you have to behave yourself. The boss let him go to Stoke, but he was a wonderful player.”

At 18, Gregg admitted that he felt that his chance of making it in the game in England had gone. Then, Peter Doherty signed him for Doncaster Rovers in 1952, and over the next five years he played 94 games for the club.

His performances for Doncaster had caught the eye of many, and one who took a particular interest was a certain Busby.

Gregg, by this time, had broken into the Northern Ireland team, and it was a performance in November 1957 by Gregg that convinced Busby that he was the man he wanted for Old Trafford.

“The turning point was when we played England at Wembley for the first time,” Gregg recalled.

“I remember that we had 11 players walking around and maybe 15 selectors and the selectors were saying ‘isn’t it great for little Ireland to be playing at Wembley’ and the old trainer said ‘great my arse, sure haven’t the greyhounds been running here for 100 years!’

“Anyway, we beat England and I had a good game. That was a good game for me and within a month of it I had signed for Manchester United.”

Doncaster didn’t want him to go, but Busby wasn’t derailed in his enthusiasm for Gregg by their asking price. United paid £23,000 for his services, making him the most expensive goalkeeper in the world.

He added: ‘I’d have done it for nothing because it was every boy’s dream’.