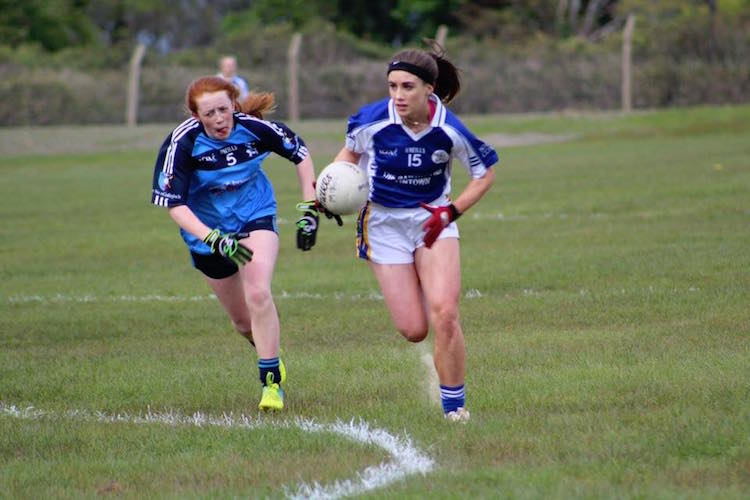 Five years of recovery: Alanah McDonnell on her long road back to Donegal jersey

There were times through the five painful years of rehab when Alanah McDonnell wondered if it was worthwhile – but giving up was never an option.

Through the mill with four serious operations on her right leg during those five agonising years, the Glenties woman could have been forgiven for tossing the football boots into the skip.

A trouble-free 2017 ignited the fire inside of her again and on Sunday she started for the Donegal senior ladies in their Lidl National League Division 1 game against Galway at Pairc Tabhoige.

It was a game and a moment that felt a lifetime in the making.

“People would break their necks to pull on that shirt and I knew I’d worked so hard to get there,” she says.

“I never imaged being back up to the county seniors. I was still struggling this time last year. When the call came in November, I thought I had nothing to lose. It was only when I actually made the panel that I realised what happened.

“Getting into the panel gave me a massive bit of confidence and to pull on the Donegal shirt again was extra special.” 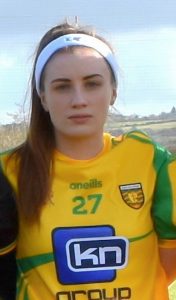 Alanah McDonnell was back in the Donegal colours on Sunday. Picture by Geraldine Diver

The first shot of pain arrived on a May afternoon in 2011.

McDonnell was playing for Naomh Conaill in a county final at Comortas Peile na Gaeltachta in Falcarragh. The temperature rose a notch with Ardara on the other side.

“I was going through on goal and just came into contact with a few bodies at the same time and fell on it,” McDonnell remembers. “Initially, they didn’t really know what was wrong. I’d never even heard of a cruciate knee ligament injury before then.

“A couple of weeks later, I was meant to play for Donegal in the Ulster minor final. I collapsed in the warm-up. The knee just gave up. I tore my cruciate in the Gaeltacht final.”

Her promise had always been obvious.

Recovery was almost complete from her cruciate ailment when she heard a familiar snap. This time, though, not only had the right cruciate gone again; the kneecap dislocated, too, and she was back under the knife in Santry.

Surgery in the Galway Clinic followed for torn meniscus and Dr Carton,a  hip specialist, was called upon for a fourth spot of major surgery, in the form of a hip reconstruction.

“At times, I did stop and wonder if it would ever happen again,” she says.

“I was never going to give up. I always kept telling myself that I’d get back. Form I was seven or eight, the dream was to play for Donegal and to represent the club. That was underneath it all and was a huge part of my life. I could never have walked away from that

“The end goal never changed. The dream stayed the same. I always dreamed of playing for the county again. County was always the dream.”

That’s not to say the road back wasn’t littered with doubts.

“It was a lonely place to be, away from it all,” she mentions.

“Every time I went on, it seemed as if I never could make it back.

“The first time I got injured, that was the first time in my life that I wasn’t playing football or actively involved in it. I missed everything, the playing and the camaraderie in the team. It wasn’t even the physical pain. It was mentally very hard. It was a big struggle, mentally, and was very frustrating.

“It got harder each time. The injuries just kept coming and it wasn’t just one injury. I tried to get on with it, but you’d be thinking: ‘Is this another waste?’ and I’d be straight back to surgery. My confidence took a massive hit as well.

“I never thought I’d be back playing with the county seniors. That’s why I took the year with the club before I could say I could do it at that level again.”

The latest comeback arrived in a Championship game against Gaeil Fhánada last year. The first steps were tentative but, having watched from the sidelines for so long, McDonnell burst back in style during the Donegal Junior A final against Naomh Muire, scoring a stunning 4-4 of her side’s tally in a 6-9 to 2-8 win.

“Winning that final was just pure elation,” she says.

“I never thought it was possible. It was a dream come true, something really special to win with your two sisters and lifelong friends.

“I sat on the sidelines for three finals. I was playing senior since I was about 11 and never got to play in a county final. Last year, playing Championship with the club was worth the wait. To come through what I did and know the pain of sitting back watching, it was worthwhile.

“The love of the sport kept me going. It just kept drawing me back. People were saying, so many people too, that it wasn’t worth it. But winning with the club at the end of 2017 showed that it was worth it. Then it was like: ‘Why stop here?’

With her sisters, Aoife and Briana, on that side, the sense of achievement heightened.

Earlier last year, Aoife was on the Donegal squad that won the Ulster SFC title and Alanah admits she had mixed emotions.

She says: “It was very hard to watch the final from a distance. But who’s to say I’d have even made the panel.

“There was a bit of sadness knowing I’d done my utmost to get there and I wasn’t able, but I was obviously delighted to see the girls winning.  I wished I was part of it, but I knew well what they had put into it and they deserved it so much.”

The Dublin-based forward trains with other county team-mates in the capital and it is certainly a rarity to meet a player so enthused by the rigours of the early year training schedule.

“Hard work just became the norm during my rehab,” McDonnell points out.

“It never stopped. It feels great to be back out training. I used to give out about training, but not any more.

“All I had were a few matches, max, in those last few years. Maybe I was back for a few club games, but it was all minimal. I never properly made it back until now really.”

A draw with Galway on Sunday came after an opening day loss to Dublin and this weekend the Donegal ladies, under the stewardship of Maxi Curran and Damian Devaney, are in Westmeath.

“It’s just brilliant to be back a part of it again,” McDonnell says.

“The calibre of girls in there is great. I joined when I was about 16 and, with the injuries, I was only in and out, so it’s brilliant to finally get back into it properly again.”

She was never going to settle for any other outcome.