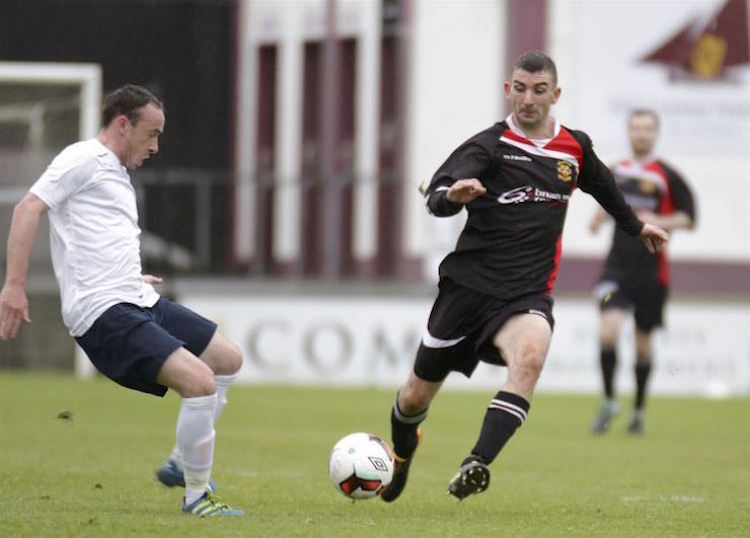 Pajo Rafferty tries not to think about what might have been.

The 33-year-old is enjoying the heights of an Intermediate Cup run with Letterkenny Rovers, who are also battling on all fronts domestically in the Ulster Senior League.

Rafferty scored Rovers’ third goal in Sunday’s 3-0 win over Cherry Orchard and the Cathedral town men have a home quarter-final against Home Farm to look forward to later this month.

Rafferty is in his first season back at intermediate level having dabbled with Glencar Celtic and Drumoghill FC in recent seasons.

It is perhaps only now that his football has a serious side to it.

“I try not to think about it too much. I’d only do my head in and beat myself up if I thought about it all the time. It would be torture.

“There’s a massive difference in the Ulster Senior League. I know at Drumoghill we played Rovers twice and beat them once in the Knockalla Cup, but that was a one off. We matched them alright, but they were in the middle of the Intermediate run at that stage.

“I’m enjoying it. I’m playing well and scoring goals. If I wasn’t enjoying it, I wouldn’t be playing, simple as that.”

He was giving it another go at The Moss and would hang up the boots.

But when McConigley called again last summer, the chance appeared. He’d played for Drumkeen in the USL 16 years ago and, having had brief stints at Curragh and Castlefin in the Donegal League, he drifted off the scene for a while.

The USL had a certain attraction and he’s taken to his new surroundings rather well.

He says: “This is my first time experience anything like this.

“Sunday was a great experience. I’m not one for getting nerves before a game; it’s only a game of football at the end of the day. I enjoyed every minute of it, especially scoring.”

Rovers were beaten by Crumlin United in the 2016 Intermediate final at the Aviva Stadium, but the class of now are itching to get back to the big stage.

Rafferty says: “I didn’t even get to the game the time Rovers made it to the final. A few ones at work already had it off and the boss couldn’t let everyone go!

“We’re just trying to take it a game at a time, but we know that the Aviva is just around the corner.

“I saw the coverage they got and what it did for the town. It was great for them.

“It’s great to be at home in the next round. We’re in a good place at the moment. We played them (Cherry Orchard) off the park at times on Sunday and they couldn’t deal with us.

“They did miss an open net at 0-0 and it could have been a wee bit different if they’d put that in.”

Rovers are back in USL action on Sunday when they host Swilly Rovers at the Aura Leisure Centre.

Rafferty says: “The League is always a priority. Rovers were so close last year too it. We want to do well in everything, in the Cups too. We’re going well in the League, but a few teams there will have a say in it yet.”