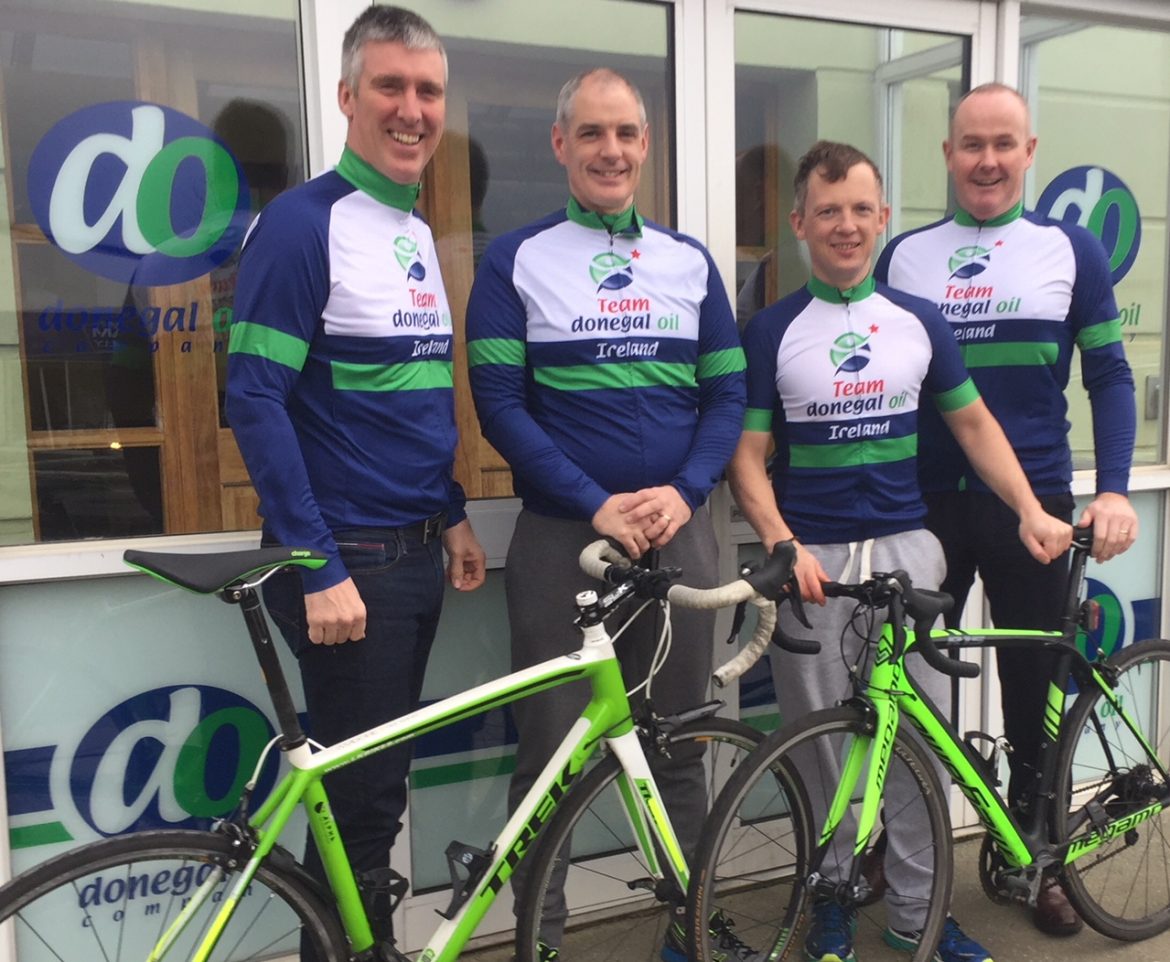 It takes brave souls to even contemplate attempting the Race Across America, which is known as the ‘world’s toughest bike race’, but these four Donegal lads are set for the ultramarathon this summer.

Arthur McMahon, Gerard Callaghan, Gavin Harris and Padraig MacGinty have been planning this for some time, training hard and they will travel to the United States this June to take part in the “ Race Across America” and they are ready to take on the biggest challenge of their lives.

The ultramarathon event, which was first held in 1982, is one of the longest endurance races in the world, trumping the Tour de France in terms of distance.

The course for RAAM generally extends from the west to the east coast of the US and is approximately 3,000 miles long, spanning 12 states from Oceanside, California to Annapolis, Maryland.

It takes a little over a week and up to 22 hours a day of cycling for a solo competitor to finish, though in a four-man event, it is possible to take just over five days to complete the race in occasional cases.

To make matters even more difficult, there is a time limit placed on competitors — nine days for teams, so these 4 Donegal lads hope to complete this within the time limit afforded to them.

They will be passing through some of the most iconic American landmarks including the Mojave and Sonoran Deserts, Monument Valley, Great Plains and Gettysburg. The popularity of the event has increased steadily, with over 35 countries represented since its inception 35 years ago.

Local businessman, Arthur McMahon, Managing Director of Donegal Oil Company and Team Donegal Oil Founder, has had this in the back of his mind for a while. Always looking for the next big challenge, Arthur gently mentioned this to three of his Donegal cycling buddies, Gerard Callaghan, Gavin Harris and Padraig MacGinty and there was never a question of how would they do this, they all immediately agreed to take on this challenge, the biggest cycling challenge that they themselves could ever imagine to take part in. 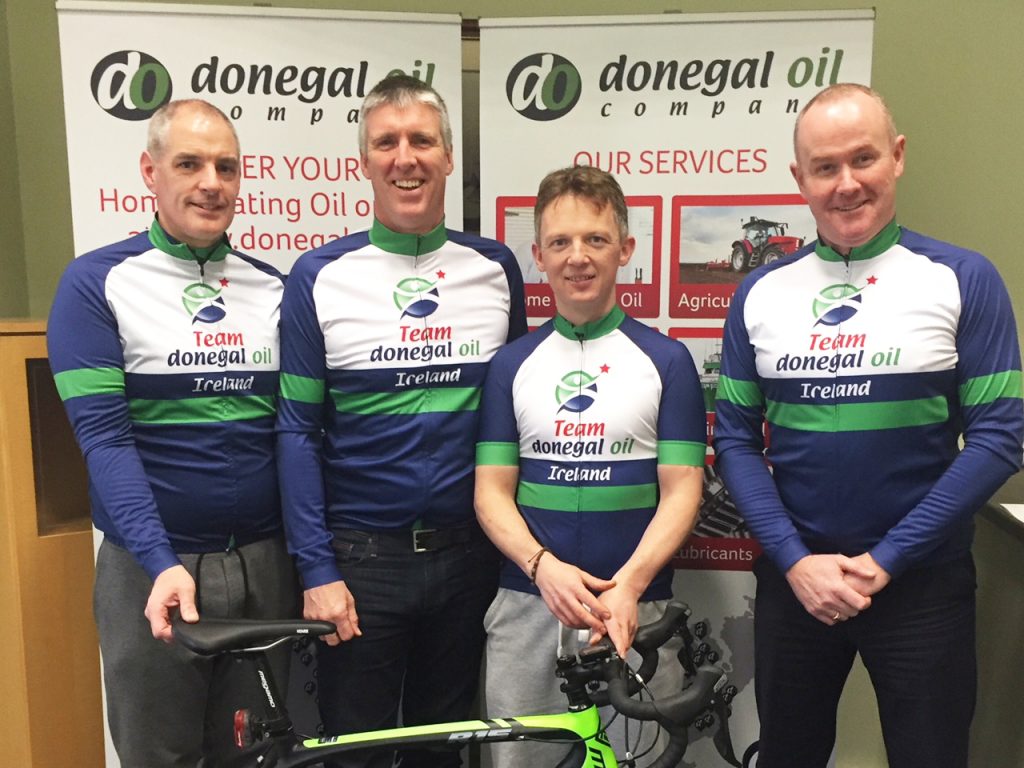 Arthur McMahon, an endurance athlete in his own right played rugby until he was 36 years old and, by his own admission, didn’t do very much for 7 or 8 years after that.

He found that he missed the dressing room camaraderie and banter and struggled to find something to replace that. He did some motor racing for a few years and really enjoyed that and then got involved in the original Coastal Cancer Challenge in Dunfanaghy, County Donegal to help raise funds for Cancer Research, and he was hooked.

At the finish line of that event Arthur remembered thinking, “That was great, with some more training I could go much, much faster”.

Arthur said: “How wrong I was! It turns out I couldn’t go faster but I could go longer, much longer. So, for the last 6 years I’ve basically been training and racing slowly, but for a long time, and I love it. My first Ultra distance event was The Race in March 2014 and then Race Around Ireland (4 man) in 2015. Last year I did Coast2Coast Ireland, a single day adventure race, The Donegal Atlantic Way Ultra, a 555km bike race in a 2 person team with my wife Julie, and Ironman Barcelona.

“There are so many other great races in County Donegal, WAAR being my favourite, that adventure is never far away. I’ve been mulling over the idea of a 4 person RAAM for a few years and this year, with the fantastic help of Circle K and Donegal Oil Company, we can finally get to the start line.

“It’s great to be able to pull together a team of people who already know each other for one of the most grueling cycling events in the world and we are looking forward to this challenge.”

Gerard Callaghan from Letterkenny, Co. Donegal commented, “Cycling was the first sport I really took seriously as a child. By the age of 14 I was regularly competing at cycling events around Ireland with the help of our local cycling club ‘The Tir Conaill Wheelers’. At the age of 15, I was part of a three person team for the Irish Time Trial Championships and we won, that was the highlight of a very intense but also satisfying period of my teenage years. For the next 20 years motor sport became my priority, competing both nationally and internationally.

“Motorsport is a passion I think will be with me always. I’ve had success as both a driver and co-driver. By 2012, with a young family, I had decided that I wanted to be an active role model for my children so I took up cycling again!.

“The urge to ‘Have a Go’ and challenge myself came right from the start and I was regularly competing in local adventure races and cycling events pretty much straight away. ‘The Race’, a 24hr ultra adventure race was my first attempt at ultra racing and I’ve completed it every year since it started in 2014. In 2015 I completed Race Around Ireland in a 2 person team.

Padraig MacGinty from Downings, Co. Donegal, also commented, “Growing up in rural Ireland and not being of farming stock, there was no donkey or tractor at hand, therefore the chosen mode of transport was the bicycle. Without the bicycle there would have been no discos, no visits to the candy shop, no music lessons and definitely no rendezvous with the fairer sex in neighbouring villages.

“Ireland is not known for its tropical climate nor is it known for its flat landscape, so it proved to be a fantastic training ground for a young man as he constantly battled in the strong head winds, pouring rain and battled all those hills.

“During my time in secondary school, there was an absence of a cycling club, and so I focused my energies and my playground was the running track. During this period, I noticed very quickly that finishing second was not an option and so my competitive streak blossomed, and this has remained with me to this day, whether in sport or my career as an Audiologist.

“I am really looking forward to RAAM 2018 and meeting up with other nutters of the same mindset. Bring it on!”

Gavin Harris from Convoy, Co. Donegal was mostly involved in motor sport, particularly stage rallying as a young man. He started when he was about 17 and it was a big part of his growing up years. In 2007 he hit eighteen and a half stones on the scales and thought he had better do something about it so he started cycling.

In his own words Gavin said, “Before long I was cycling competitively and that led to an adventure or multi-sport race involving running and kayaking. After a while of doing that I had a go at Triathlon and found I was enjoying that too. I did my first Ultra, TheRace.ie, in 2014 and they seemed like a great bunch of people so I ended up competing with and against many of them in the Race Around Ireland 4 man team in 2015.

“In 2016 and 2017 I did therace.ie again, for anyone who has competed in it, it’s a real endurance test! A mixture of running (64km), climbing (5km), kayaking (15km), cycling 170km around some of the most stunning parts of Donegal. 20 hours non-stop in the month of March with not so favourable weather conditions.

“I also did The Donegal Atlantic Way Ultra Race (555km solo) in 2016 and the sunburn is just fading now from Ironman Barcelona in September last year. I can’t wait until June comes around so that we can get RAAM started and the excitement from planning and training is just unreal.”

Securing sponsorship from Circle K, was a huge factor in this team of four being able to financially and logistically being able to plan, execute, put a crew together and take part in this event. Topaz are currently globally rebranding to Circle K and the timing fits perfectly for this sponsorship. Circle K has already launched its brand across America and will be rolling out in Ireland this year.

The team have branded themselves as “Circle K Team Donegal Oil Ireland” and their branded clothing, logo and online presence will launch soon.

Arthur McMahon and the team at Donegal Oil Company have also launched “The Donegal Oil Foundation”. He said, “The company has always supported local fundraising efforts and that won’t change. However, we have a really busy few years ahead for our Team Donegal Oil initiative and we’d like to make sure that there’s a lasting benefit from all our hard work. We’ll be asking local charities, sporting and other organisations, who need help with buying equipment, to contact us.

“We’ll have a few rules about how we handle funds raised by the Foundation. These are: We will always publish on our Facebook page, every 3 months, all the money raised and donated by the foundation.

“All funds raised will only be donated in County Donegal. We will always aim to buy equipment for the organisations we seek to help rather than giving money. We will never take any salaries, expenses or fees of any kind from The Foundation.”

“Team Donegal Oil has raised over €30k for charity in the last 4years and we wanted to have an open and transparent way of showing people how the money raised was spent. That’s why we have rules about what we can help with.

“Keep an eye out for things that Team Donegal Oil are getting up to over the next few months and we are happy that any funds raised through The Foundation will be distributed in County Donegal in a transparent way.”

Now it’s cycling training and Arthur, Gerard, Gavin and Padraig are geared up and looking forward to the biggest challenge they will possibly ever undertake in their lives and they would like to extend a thank you to their families, friends and sponsors for their encouragement and support and they look forward to taking you on their journey from now until the finish line!

And if you can support them in anyway by sharing their journey and charity fundraising efforts online they would be eternally grateful! RAAM USA here they come!